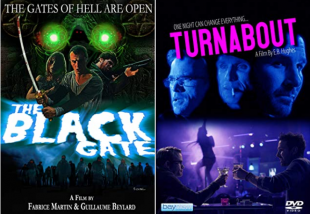 The Black Gate
David and Sarah are siblings, separated for many years after the mysterious death of their parents. The scars of the past of still there for both even though they have moved on to successful lives: David is a fitness teacher and Sarah is an archaeologist. Sarah admits to David that she contacted him for a reason: a mysterious parcel containing a book on the occult written in a strange language that she received from their Uncle Simon, the last surviving member of their father’s family. Sarah enlists David to accompany her to their uncle’s house to assist her in translating these old spells and understand the strange dreams she is having between the past and the future. At the same time, three criminals are on the run after attempting to flee the country and also end up at Uncle Simon’s house. Soon, the five people find themselves in a situation that leads them straight into the depths of Hell. And the dead are not happy… . In French with English subtitles.
The Black Gate Available Now on DVD at Amazon

Turnabout
A troubled man survives a suicide attempt. He calls an old friend to rescue him in the middle of the night. Their journey is just beginning, and by daybreak, a tragedy will surface. Starring George Katt (The Irishman),Waylon Payne (Walk the Line), Peter Greene (Pulp Fiction); Written & Directed by E.B. Hughes
Turnabout Now Available on DVD at Amazon