arrive on DVD from BayView Entertainment 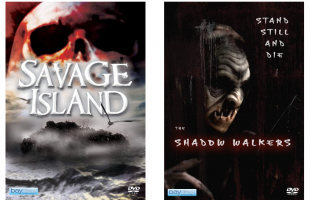 BayView Entertainment announces the release of two new movies on DVD adding to their horror genre selections – Savage Island and The Shadow Walkers.

Savage Island – Julia Young and Steven Harris are having marital troubles, but on a weekend trip to visit Julia’s family on the remote Savage Island, marital problems quickly become the least of their worries. An intense struggle between the Young and the Savage families, the only residents living on the island, takes thrills and chills to a whole new and disturbing level. The Savages, a bunch that take the terms ‘hillbilly’, and ‘hick’ to a new frontier, are out to claim Steven and Julia’s baby as payment for the death of their own son who was accidentally run over by Julia’s pot-head younger brother. Starring Don S. Davis, Steven Man, and Brendan Beiser.
Savage Island on DVD available at Amazon

The Shadow Walkers – A group of young researchers and military personnel uncover a hive of twisted, genetic mutants that stalk them from the shadows. Now these brave few must destroy the monsters that helped create–before more people are killed and devoured. Music by Marillion.
The Shadow Walkers on DVD available at Amazon