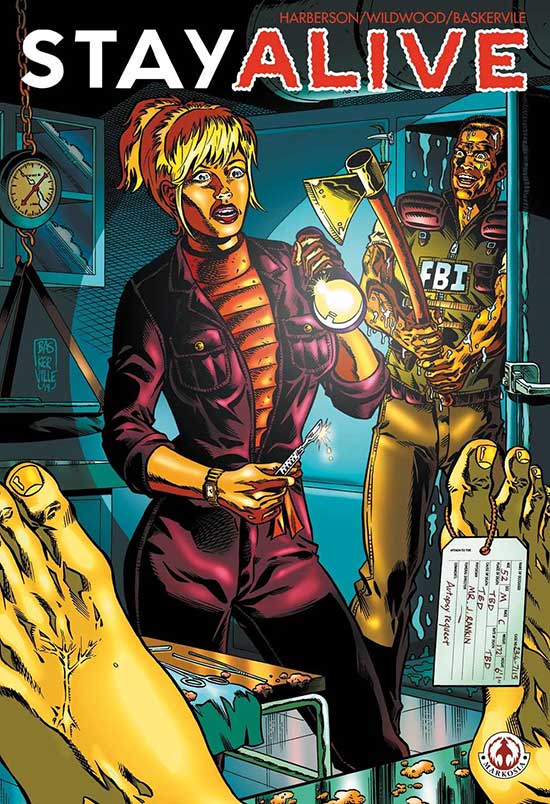 Stay Alive is an adult style, horror action graphic novel from the gang at Markosia. Coming in at over 100 pages this mature read is just what horror movie fans are looking for. I say this as it tends to take on the direction of films like “Running Man”, “Gamer” and other modern action pieces that center themselves on a popular game that involves executing its prime targets. Add to that a murder spree like no other with plenty of dismembering, head chopping, slice and dice action to fill in the panels.

However, first let’s give credit where credit is due, “Stay Alive” features the excellent compelling art work of Stephen Baskerville laying the visual eye candy for the script and story created by James C Harberson, III and Mackie Wildwood. There is plenty of bloodshed, sex, and nasty interactions that makeup the brunt on this book, let alone a compelling story line with a modern twist.

The story here sets foundation in a pseudo futuristic version of our present that has fully embraced TV exploitation. In this setting high profile individuals are targeted for live execution on television on the basis of trying to stay alive while the main antagonists set after them. The show is called “Stay Alive” and is a new program that focuses on an organization called “Ukill”.

As we are told, “Ukill” is a shadowy organization enterprise that murders people chosen by its web site patrons. The site itself while being highly popular (world’s most popular, in that sense) is also banned in over 100 countries. Though there are areas that have allowed the operation to exist rumored to be among the Eastern Europe or Pakistan area. Ukill itself has become legal in some states divided by circuits independent of others. At current, and until further notice, this is the status quo until the Supreme Court dictates otherwise.

This brings us to our lovely focal character Jane Morgan. Jane is the graphic novel’s sex pot focal character of whom the new show has focused on. Jane received some notoriety from her appearance in the film “Pit Stop Paradise” and has managed to stay public with her reports of court appearances, arrest warrants, and sexual exploits, though has worked her way up to be most hated person in America (while also agreeing to sign on for the debut of “Stay alive”). Jane is offered a 2 million payout as the show’s first featured onscreen villain/target. Simply enough, Jane’s needs to stay alive to get her payout. tHough easier said than done, it will be no walk in the park as bodies pile up.

Jane also happens to be the former girlfriend to acquitted serial murdered Kenton Kraft who has just escaped his confinement in time for the challenge at hand. Jane is given a studio assigned body guard to help keep her alive while Kenton seems content slicing thru anyone who gets in his way on-route to Morgan. The body count increases as pretty much every one around Jane is executed in some fashion or another.

The graphic novel “Stay Alive” keep things rolling with plenty of sexy images, action scenes and tasty kills moving the story forward. Boobs, executions, and violence make up the core of this novel providing the perfect combination of elements that our readers love having served up to them. In fact, you be hard pressed to find a spread that doesn’t have some blood shedding going on.

The comic frames are professionally well illustrated in the style of old school comic books boasting vibrant colors over matte finished paper. The story is also well written providing imagery to its narrative that appears to be influenced by a multitude of mediums and sensationalism mirroring today’s growing fascination with all things filmed, caught on camera, or published over the Internet. While it does take on a fantastical Grimm reality, some might say it’s only a matter of time. The book has fun with itself working the in vein that films like “The Raid” are centered in while keeping its reality TV show factor booming loud and clear!

Highly recommended and visually captivating, “Stay Alive” is simply a cool artistic offering from the group at Markosia 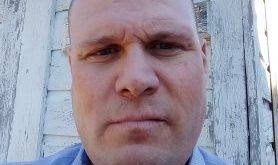