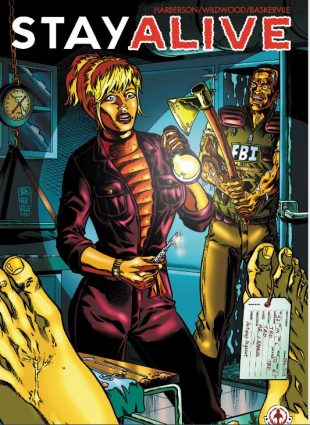 What can horror fans expect from your graphic novel, STAY ALIVE?

The heroine, actress Jane Morgan, has descended from an Oscar-nominated film debut into personal misadventures and Z-grade, T-and-A slasher flicks. Desperate to rescue her career, she provokes uKill, a mob-justice entertainment consortium that murders whomever its website patrons choose by popular election—literally anyone, anywhere. Jane becomes uKill’s target by spoiling the last-wish pro baseball adventure of Corky Sprague, a terminally ill child.  She then parlays her calamity into a starring role on Stay Alive. It’s a reality TV show about her attempts to avoid being uKilled.

What inspired you to write the story of STAY ALIVE?

Stay Alive examines mob justice. Mobs terrify me. They validate hatred. They obliterate reason and human dignity by weaponizing fear and hyperbole. And, as James Madison observed, the mob is in all of us: “In all very numerous assemblies, of whatever character composed, passion never fails to wrest the sceptre from reason. Had every Athenian citizen been a Socrates, every Athenian assembly would still have been a mob.”

How does this differ from your work on A DISGUSTING SUPERMARKET OF DEATH?

Do you have a favorite character that you’ve created?

I tend to despise charisma. Like the mob mentality, it’s a seducer. Hence Kleber “Hodgepodge” Pillsbury, the “hero” of “Extra Credit” (the first story in the Supermarket). Hodgepodge is “a gadabout mass-murderer who penned a series of bestselling memoirs weaving lurid recollections of his crimes with pro-eugenics jeremiads and detailed ratings of past lovers.” He got his nickname “after he merged several victims into one body and delivered the results to a prominent medical school, which kept it alive for almost two weeks.” Hodgepodge is smooth and terrible, like Hannibal Lecter, one of the greatest horror characters ever created. You want to like him, but how can you?

What was the most difficult aspect of writing STAY ALIVE?

Telling the story in 100 pages with maximal impact and clarity. Doing so required an ongoing negotiation with our artist, Stephen Baskerville (whose final renderings are self-evidently brilliant).

How do you describe your writing style?

I tell terrible stories narrated from an ironic-comic-didactic distance, making them at least tolerable and, hopefully, delightful.

Who are the horror writers that influence you?

What are your favorite works of horror (graphic novels, television, movies, anything)? 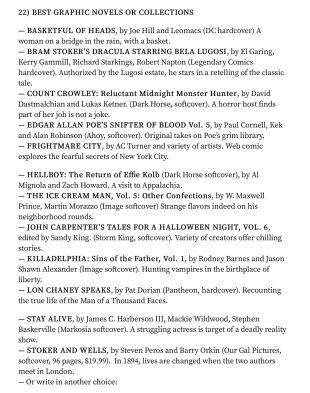 What does it personally mean for you to be nominated for Rondo Hatton’s Best Horror Graphic Novel?

I’m humbled and gratified, especially since I’ve admired the work of two of my fellow nominees (John Carpenter and Mike Mignola) since childhood. And I’m quite grateful to my publisher, Markosia Enterprises, for taking a chance on me.

What is next for James Harberson? 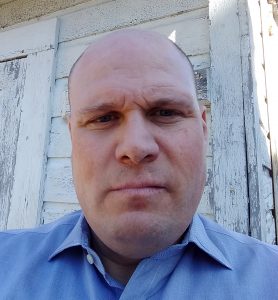 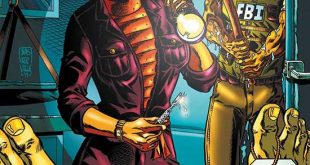