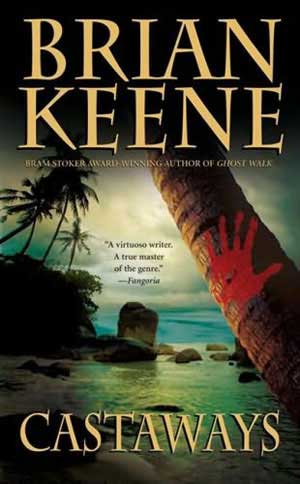 Once again, Brian Keene has made a name for himself. There’s a reason why he’s a master of the horror genre. His latest novel Castaways is that reason. After just finished reading his latest horror novel, it is evident that Brian was inspired by the late Richard Laymon. He even mentions this in the author’s note at the end of the novel. The book centers on a group of reality television contestants who have participated in the television show called Castaways to compete in a series of challenges and to try to be the last one on the island. When I read the novel it felt like Survivor meets The Hills Have Eyes, for me that’s what the tone felt like.
The group thinks they are the only people on the island and that nothing else inhabits the island, little do they know, there are a subspecies of creatures that lurk within the heart of the island and hidden within a cave where they’ve been struggling to survive and to expand their species.

There have been deformities with their kind due to them inbreeding. The creatures who appear like chimpanzees are mean, vicious as hell and have a strong taste for human flesh. Once they discover the group of contestants, they plan to make their next move. That move involves them killing the males, feasting on their flesh and taking the female players back to their lair so they could mate with them. Brian does not hold back on the terror that takes place when a cyclone hits which further complicates things as most of the staff had been transported back to the freighter leaving behind three cameramen and the contestants who begin to fall victim to the horrific creatures one by one.

The novel has caught my attention as I found myself wanting to find out what happens to the contestants and I find myself cringing at the horrible fate that happens to the unlucky ones. The novel is brutal in so many ways. The pacing is well done, Brian has definitely given us another reason to stay away from remote tropical islands. I would love to see this as a movie, it would make one kick ass horror film. The characterization was well drawn, you have a group of characters to some readers they may sound stereotypical, but you must realize that this is apart of reality television, the producers want stereotypes. I found myself laughing at one character’s dialogue as he curses more than a sailor. The humor is good and there is tension that fills every single page.

You have characters that you would love to love and love to hate. Brian has also thrown in a subplot which I would have loved to see more play out with this particular character and what his real motives for being apart of the game was. At times I was at the edge of my seat when I read the novel. I normally read all of my horror novels at night and I was glad I did so with this one. Brian Keene once again gives us another reason why he is the master of the horror genre like I have mentioned in the beginning. He is one hell of an author who I’ve been reading more and more of his books. He has managed to give us something different and unique adding a touch of Richard Laymon’s flavor to this latest horror novel that Brian has offered us. I am proud to say that I’m a true fan of his works of fiction. Brian never ceases to amaze me with his ability to tell a good horror story. He knows what he’s doing when writing and he manages to do it well. This is one author to look out for because he may very well be the next Stephen King. Beware Brian Keene. His books are scary.