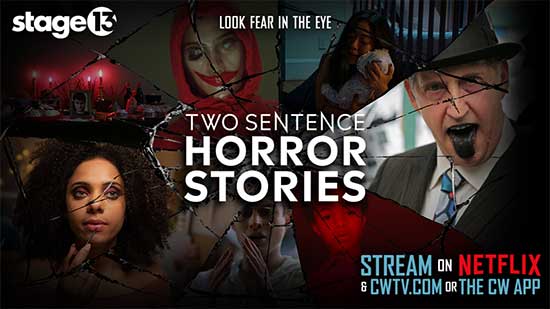 Inspired by the viral fan fiction, ”Two Sentence Horror Stories” is an award-winning, original scripted horror anthology series now streaming on Netflix. Each stand-alone story taps into the expansive world of the horror genre, pressing universal primal fears filtered through the anxieties of a connected and racially diverse generation.

Created by writer/director/producer Vera Miao the series premiered on THE CW in August and now offers fans a chance to revisit the distinct and popular horror subgenre experience that tackles today’s most relevant and topical social issues.

STREAM ALL THE EPISODES NOW!

EPISODES:
“GENTLEMAN” (Guest Director Natalia Iyudin)
Written by C.S. McMullen
A serial killer with an obsession for single moms stalks a young mother who rejected him.

“SQUIRM” (Director Vera Miao)
Written by Vera Miao
A low-paid office assistant wakes up naked in her own bed after the office
holiday party with no idea how she got there.  Who was it and what did he put inside her?

“LEGACY” Director Vera Miao)
Written by Pornsak Pichetshote
The ghost of an abusive husband continues to torment his family even after his death.

“SCION” (Guest Director Natalia Iyudin)
Written by Sehaj Sethi
When a rebellious teen is diagnosed with terminal cancer, his family’s legacy and wealth ensure him a place in an exclusive, experimental treatment center that he begins to suspect has a far more sinister transformation in mind.

“TUTORIAL” (Guest Director Tayarisha Poe)
Written by C.S. McMullen
A beauty vlogger records a complex makeup tutorial as the camera catches someone slipping into her room when she’s not looking.

“ONLY CHILD” (Guest Director Nikyatu)
Written by Leon Hendrix III
When an elderly Haitian grandma is forced to move in with her estranged son, she begins to suspect something is very wrong with his perfect family.