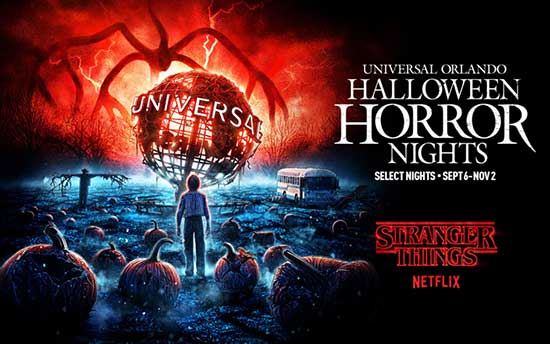 In case you live in a cave (which would leave me curious as to how you’re reading this article), you’re already somewhat familiar with Halloween Horror Nights, the yearly event put on by Universal Studios in Orlando, Florida (also in Hollywood, California, Singapore, and Japan, but we’re just focusing on the Orlando event). This year, the 29th annual Halloween Horror Nights (aka HHN 29) event runs select days from September 6th through November 2nd – starting a full week earlier than last year – and will feature ten houses, five scare zones, a show, and much more. For specific dates and ticket packages, as well as information on tours and hotel accommodations, you can refer to the official HHN 29 website. We’re just here to talk about the scares. This year marks our third trip to the park for the Halloween event, and having seen the lineup of houses and scare zones, it might end up the best yet.

HHN 29 kicked off this year’s announcements with a big one: Stranger Things is returning. Last year, they made their debut at HHN with a house based on the first season of the hit Netflix show, and it was absolutely a crowd favorite. This year, Universal Studios looks to top itself, with a house based on seasons 2 and 3. All your favorite characters will be returning, along with Demodogs and doppelgangers and probably a Starcourt Mall scene or two. Based on last year, I’d recommend hitting this house early, as the lines will no doubt be ridiculously long, but well-worth the wait. Rumor has it this house will have the biggest creature HHN has ever attempted, one that takes three people to operate.

A Stranger Things house based on the last two seasons is pretty huge, but it might not even the biggest announcement of this year’s event. A house that fans have been begging and pleading for, and coinciding with the 35th anniversary of the original movie… Ladies and gentlemen, I present to you, Ghostbusters. Being touted as the most technical house yet in the history of Horror Nights, Ghostbusters promises confrontations with Slimer, Gozer, and the Stay-Puft Marshmallow Man, among others, as eventgoers walk through sets like the New York Public Library, the Temple of Gozer, and more. Based on the fan response so far, this house might give Stranger Things a run for its money as far as popularity (and waiting times). 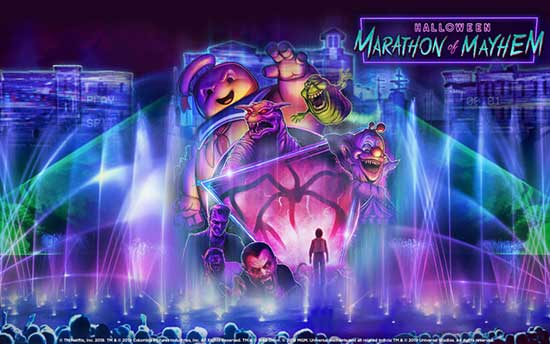 Last year, HHN 28 had a really great scare zone based on Killer Klowns From Outer Space. It was so well-received, this year they’ve moved the alien pranksters into their own house! Following the scents of cotton candy, popcorn, and ice cream, eventgoers will find themselves in the cotton candy cocoon storage room as well as the circus tent spaceship. In addition to all the characters from last year’s hit scare zone, a bunch of new clowns will be joining the party this year, including the babies and Klownzilla. If this house is even half as fun as last year’s scare zone, we’re all in for quite a treat. What are those boys going to do with those pies?

Want more classic scares in your houses? Are Stranger Things and Ghostbusters too family-friendly for you? Are the Killer Klowns too goofy and light-hearted? Oh, don’t worry, Universal Studios has your cold, black, hardcore heart in mind as well. For the horror veterans, we have the Universal Monsters house. All of our old friends, together again! According to the press release, we’ll get Dracula in his castle, the Wolfman in a forest, Frankenstein’s monster in a lab, and let’s not forget about the Creature from the Black Lagoon, the Mummy, the Phantom of the Opera, and more. This is easily one of the houses I’m most excited for.

Still not scared? Okay, then maybe these last two announcements will change your mind. 2019 brings Jordan Peele’s Us to Universal Studios! You’ll get to check out the beach house, the pier, and the ominous funhouse before opening the door to the “other” world. The “tethered” doppelgangers aren’t happy with their station in life, and they’re not afraid to let you know about it. Expect mirrored halls and lots of people in red around every corner. When I saw this movie opening weekend, I immediately said that it would be an amazing house at HHN, so I’m very excited to see how it all turns out.

And to finish off the IP section of houses for HHN 29, we get a special little house based on Rob Zombie’s House of 1,000 Corpses. This is one of my favorite movies, so I’m very excited for this one. Coinciding perfectly with the release of Zombie’s newest film, 3 From Hell, we’ll get to meet the Firefly family, maybe take a look at Captain Spaulding’s Museum of Monsters and Madmen, and who knows…if we’re not careful, we might find ourselves face to face with Dr. Satan himself. I wonder how many times I can walk through this house in one night? 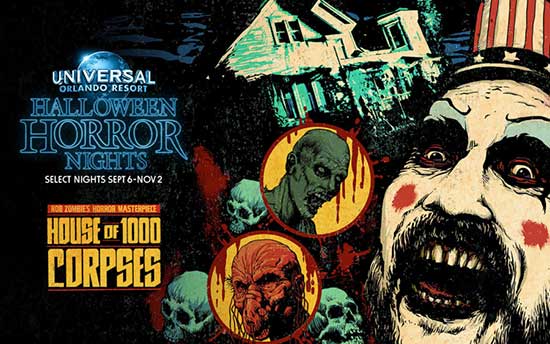 There’s a night’s worth of awesome packed into those six houses alone…but we’re just getting started!

Each year, Halloween Horror Nights splits its houses between IP (“intellectual property”) houses and original houses, and while there’s only four originals this year, they all sound pretty amazing. First up is Nightingales: Blood Pit. This house is set in ancient Rome, focusing on the brutal, bloody gladiator games. Add to that bloodshed a race of creatures known as the nightingales who are more than happy to feast on the dead and dying gladiators, but intrigued by the idea of live prey as well. This one is based on creatures from an original house featured at HHN 21 back in 2011. Next: Depths of Fear. If you’re terrified of being stuck underwater in a tight place, this is the house for you. Add in a terrifying breed of parasitic creature known as the “mouthbrooders,” who slither about infecting the miners trapped under the sea, and this starts to sound like a great claustrophobic adventure. Yeti: Terror of the Yukon is set at a logging and trapping camp in the middle of a horrible blizzard, where the workers have to try to survive more than just the treacherous cold conditions. “The snows will be red with blood,” says the press release, and I couldn’t be more excited. I’m picturing Dead Snow and 30 Days of Night, but with yetis, and this smile is frozen to my face. And finally, we get Graveyard Games, which follows what happens to a couple of teenagers who decided to play in the cemetery late at night. Ghosts and ghouls and skeletons will be around every turn. This one looks to be somewhat interactive as well, with special features through Facebook Messenger that tell more of the story. Graveyard Games also looks to be the Carey, Ohio, tie-in this year, for those familiar with HHNs of years past.

These ten houses will be packed with frights, but that’s hardly all you get for the price of admission. Located around the park are five “scare zones,” open areas to stroll through without waiting in line. Vikings Undead combines zombies and Vikings in what will no doubt be a brutal and scary time. Vanity Ball features mad “artists” who have used their blades to create living works of art. Anarch-Cade will bring an 80s arcade style to streets full of “neon slashers” whose idea of partying is a bit different than normal. Zombieland: Double Tap is based on the hit film Zombieland and the upcoming sequel, and begs you to remember those rules! And Rob Zombie: Hellbilly Deluxe takes the music and videos of Rob Zombie and brings them to life in what will no doubt be a loud rocking, bloody good time. In my experience, you could easily spend an entire night taking in everything going on in the scare zones alone, as there is constantly something going on in each area, so plan accordingly.

The Academy of Villains has once again returned to HHN, and this year brings a new show – Academy of Villains: Altered States – featuring their unique stage show of dance and theatrics. This year, Universal Studios is also adding something brand new. The Halloween Marathon of Mayhem lagoon show will feature music and scenes from some of the scary movies featured at HHN 29, all projected against water from fountains in the lagoon area. Need a break from all the scares? These shows are the perfect way to relax and enjoy something truly special between houses.

Every year, Universal Studios Halloween Horror Nights amazes, always adding something new to the mix. From great houses to engaging scare zones, fantastic shows and a whole lot more, there’s something for everybody here. They recommend no children under the age of 13, as there is unrelenting chaos and terror throughout the park at all times. Add in food and drink specials (pizza fries are a legendary favorite), trivia on the HHN app, and a crowd full of horror-loving maniacs, and it’s really hard to top this annual Halloween celebration.

Have you gone in the past? Are you planning to go this year? What are some of your favorite memories from years past? Let us know in the comments.