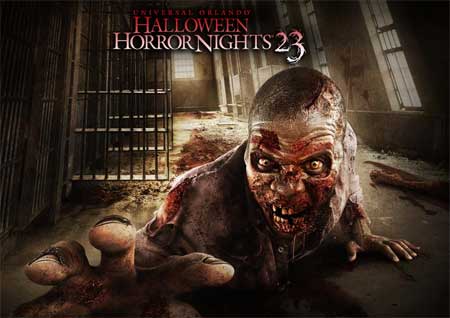 Cabin in the woods 5/5
This house was epic! First house of the night an it blew me away. They stuck to the movies plot and scenery flawlessly and didn’t miss an opportunity for a scare. There was big unexpected scares in this one that had me literally backed into a wall at one point. It’s a win win for me since the house is as badass and intense as its film. This is a Halloween horror nights must see house for me and judging by the reactions of guests an all time favorite.

Evil dead 4/5
I’m a huge fan of both the classic and the new film but classic horror lovers beware this house is based on the newest installment only. Not a bad thing at all because it delivers! This house had my all time favorite make-up. I hope it lasts throughout the entire event because it looked almost movie quality. The “scareactors” were on point with their acting along with the sound effects. More gore would of scored this house easily a 4.5.

The walking dead 3.8/5
I’m sorry to say it but I’m tired of zombies. 2 years in a row feels like too much but they intensified this house greatly compared to last year. To my surprise I had one of the best scares of the night in it. The set design is FANTASTIC but as for scary it lacks a bit. There was an actor that I thought was a normal guy until the sound effect kicked in, the makeup was that bad on him. Fans of the show should be very happy but everyone else seems to be on the same “been there, done that” page.

La LLARONA 3.4/5
When I heard that we were getting this house I was beyond excited. The first couple of scenes in this house are very strong and full of so much potential. As soon as you hit the half way mark its kind of like seeing the same thing again and again. Some creepy end scenes but not enough to bring it back to life or do the beginning justice.

Havoc 4.2/5
Spectacular, this house had the most frequent amount of scares. You can easily imagine moving on a high speed train which had me mesmerized. I walked in with low expectations but left with an ear to ear grin. It was refreshing to see an original house be on par with an IP this year. When the train derails the house maintains its intensity down to the last scare. It easily deserves the score given. And yes their is a derailing train effect and it’s amazing!

Awil 2.8/5
If this was a beauty pageant this house would have the first place ribbon. The set was breathtaking and the old fashioned sound effects were unbelievably cool. But sadly the scare factor was not there. The entire first 2 minutes I didn’t even see a single actor. I hope that is just due to the fact it’s a preview. I heard lots of complaints about that first scene. If your a fan of the movie it’s very cool to walk through but not otherwise. The transformation scene is a must see though! 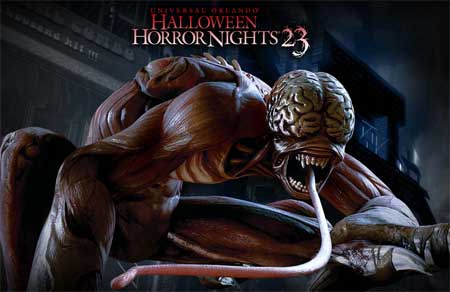 Resident evil 4.5/5
Holy s***! This house kicked so much ass! It was unique, beautiful and full of amazing actors. The sounds were very realistic and loud. It’s based on the video games only and if your a big fan I think this house will have a perfect rating for you. I’m not going to give it away but some unique video game related scenes stole the show. And during all of this is a high frequency of killer scares. This house is a must do! The only complaint I have is the short length of this house. Otherwise my hats off to you universal.

Afterlife 2.5/5
The story behind this house is amazing. You look through the eyes of a killer getting tourmented in the afterlife by all his victims. Awesome right!? Nope. This house was very boring and pointlessly 3D. The scares were so predictable and nothing nothing felt new to me. This house could be avoided in my opinion, especially if its over a 30 minute wait. I don’t have much hope for this unmemorable cheap looking house but who knows. Maybe the actors will step it up a notch.

Scare zone 1/5
Terrible makeup, and terrible acting zombies. I acted like a zombie and personally got A better crowd reaction. Even with the giant props everywhere I didn’t care to look around. I actually enjoyed last years more which isn’t saying much. I really miss the way they used to be but atleast the houses make up for it this year.

Thank you for reading! Follow me and let’s discuss in more detail!
-Michael Grise