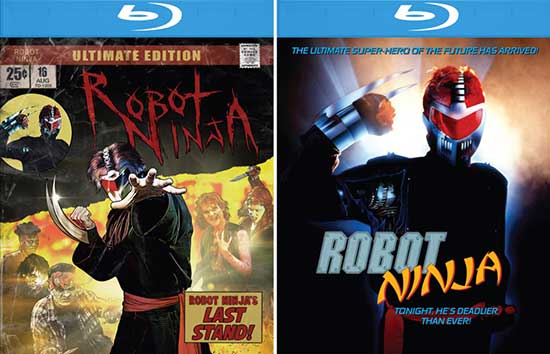 Tempe Digital announces a 2-Disc Ultimate Edition Blu-ray/DVD for the 1989 vigilante superhero horror film “Robot Ninja” will be shipping in late March, marking the high-definition debut of this vintage direct-to-video shocker. Orders can be placed exclusively from the Tempe Online Store until April 1 and include a reversible 18×24-inch poster while supplies last.

Shot and released in 1989, writer/producer/director J.R. Bookwalter followed up his ambitious debut feature “The Dead Next Door” with this dark thriller about a comic book artist who dons the persona of his most famous superhero character to battle a gang wreaking havoc upon a small town. Out of print since the original VHS release from Cinema Home Video, “Robot Ninja” remains a popular cult title with collectors three decades later.

For this one-of-a-kind release, Tempe Digital has painstakingly restored “Robot Ninja” from a 2K scan of the original 16mm A/B roll cut negative film elements with a dynamic new 5.1 surround remix. To celebrate the 30th anniversary of the film’s home video debut this year, collectors and fans will be able to enjoy the movie in 1080p HD (4:3 aspect ratio, 1.33:1) together with the standard-definition master used for the VHS release, now with original stereo mix for the first time ever.

Available separately is the Official Comic Book Adaptation, with an Original Motion Picture Soundtrack arriving March 15 on iTunes and other major digital music platforms, followed by a CD release on April 19. A separate manufactured-on-demand (MOD) DVD version of the 2K restored version with bonus features will be available April 23 from Amazon.com and other retailers.

A 16:9 widescreen version of “Robot Ninja” is now available to rent or own from iTunes, VUDU, Vimeo on Demand, and other digital retailers, with theatrical bookings handled by AGFA. Every Friday leading up to the release of the Ultimate Edition, a new bonus feature will be added exclusively for Vimeo on Demand customers; this week is “Contemplating Coleslaw,” an interview with actor Scott Spiegel (director of “From Dusk ‘Til Dawn 2: Texas Blood Money”), which joins prior #NewFeatureFriday additions “Rebuilding the Robot” (a 21-minute look at the 2K restoration) and “Thank You Miss Barbeau,” an interview with actress Linnea Quigley. Vimeo is the only streaming provider to offer both 16:9 and 4:3 versions of the 2K restored feature together with Ultimate Edition extras, priced at only $4.99 for a limited time.

Vimeo on Demand screeners available for review purposes; a limited number of Ultimate Edition Blu-rays will also be available to select outlets by request only.

SYNOPSIS:
Late one night, frustrated comic book artist Leonard Miller witnesses the brutal rape and murder of a young couple at the hands of ruthless small-town thugs. Seeking vigilante justice, Miller decides to become his most famous character, stalking the night intent on spilling the blood of any criminal who stands in his way! Written, produced, and directed by J.R. Bookwalter (“The Dead Next Door,” “Ozone”), “Robot Ninja” slashes, stabs, guts, pokes, and jabs its way to a climactic finale, putting a unique imprint on the superhero genre. 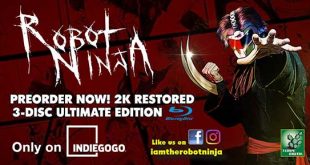