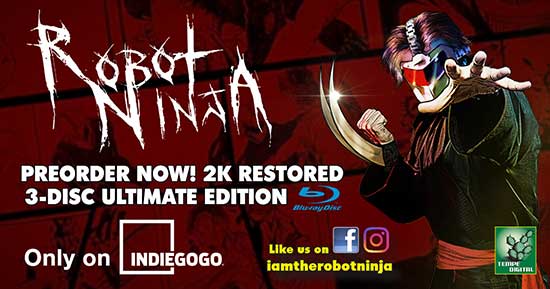 Shot and released in 1989, writer/producer/director J.R. Bookwalter followed up his ambitious debut feature “The Dead Next Door” with this dark thriller about a comic book artist who dons the persona of his most famous superhero character to battle a gang wreaking havoc upon a small town. Out of print since the original VHS release from Cinema Home Video, “Robot Ninja” remains a popular cult title with collectors nearly three decades later.

For this one-of-a-kind release, Tempe Digital has assembled three unrated versions of the film, two created from a brand-new 2K restoration using the recently discovered 16mm A/B roll cut negative film elements. To celebrate the 30th anniversary of the film’s home video debut next year, collectors and fans will now be able to enjoy the movie in 1080p HD 4:3 original aspect ratio or 16:9 widescreen, alongside the standard-definition master used for the original VHS release. 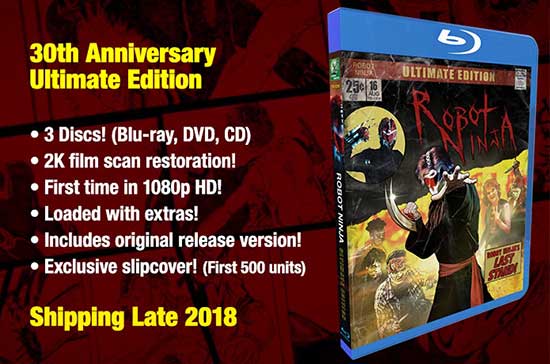 The release is capped off with reversible artwork and a full-color booklet including behind-the-scenes photos and comprehensive liner notes. The set is available bundled with a variety of optional perks including a comic book adaptation, limited edition VHS, reversible theatrical poster, books containing the original screenplay and artwork created for the film, and a Vimeo Digital HD copy which can be streamed to televisions, smartphones, tablets, and other devices worldwide.

The first 500 units of “Robot Ninja” Ultimate Edition Blu-ray include an exclusive slipcover; 1,000 numbered and signed editions will be produced for the 60-day Indiegogo campaign. Preorders are scheduled to ship in late 2018, with a limited theatrical release for the restored 16:9 version planned for this fall. 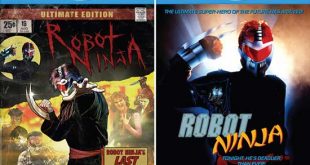