I admit that I am not sure how to approach a review of the kid-friendly, animated “Howard Lovecraft” movies, so I’m thinking maybe lumping them all together would be best as they act like episodes in a weekly series. The basic elements, both good and bad, of all the films stay consistent throughout the trilogy with the individual movies varying only in that they have different stories and voice actors who come and go with each film.

Overall, the films tell the story of a young Howard Lovecraft. His father starts out in an insane asylum, his mind broken from his travels in another dimension. Not that anyone believes what he says, except Howard, of course. When given a book his father compiled during his other dimensional trips, Howard opens a similar doorway.

In doing so, he sets in motion a likely reawakening of the Great Old Ones, ancient evil entities who seek to corrupt, enslave, and devour all life and are locked away from Mankind in another dimension. He also activates a series of (as they are referred to in video games) fetch quests which see Howard sent after the remaining two volumes of his father’s notes so that they can be combined into the Necronomicon which can open the dark dimension. 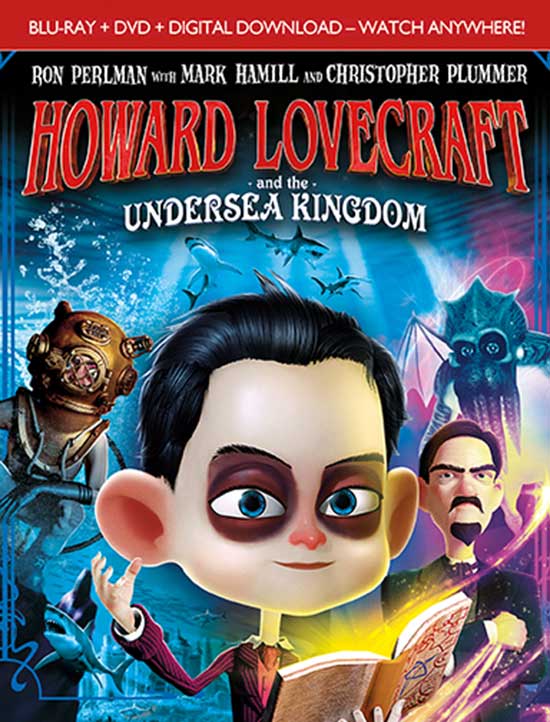 As he moves through the movies, Howard learns there is a group who oppose the coming invasion of evil. He is trained by one of its members who also joins in the adventure (primarily so they can explain all the convoluted information that fuels the Cthulhu mythos through conversations with other adults in the films).

Like I said, it would be a decent premise for a TV/streaming series. Each week, young HP Lovecraft meets new elements of the whole dark universe full of the Great Old Ones, the Outer Ones, and so on. Instead, we get them in movie-length segments released roughly a year apart, which isn’t a bad idea as 80+ minutes gives the filmmaker’s more time to, ideally, expand on a rather dense and somewhat confusing universe full of characters with difficult names. When Cthulhu and Shoggoth are the two easiest names to pronounce in the Lovecraft Universe, you know young kids may have trouble wrapping their mouths around a lot of the terms to be used.

Confusing, hard to articulate, and, then, the worst part of it all, the consistent and pervasive darkness of the tales which are full of horror, loathing, insanity, and pure evil. Not something you expect The Backyardigans to tackle on an average episode. And someone wants to make a series of kids’ movies built around this universe? Why not make a series in which Dora becomes a school shooter; it might be easier to understand. 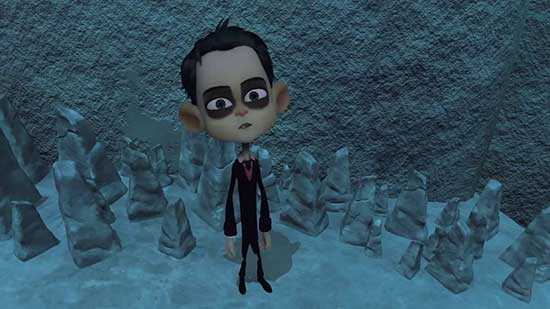 Unless your kids are already soaked in the knowledge of horror stories, monster films, and twisted television, you might consider that, in spite of the rather tepid treatment, the trilogy includes scenes that may spark fears in younger viewers with possessed parents and friends who try to hurt or kill when overwhelmed by the evil attempting to escape. The third film is the biggest problem in this area with Cthulhu killing an entire planet alongside images of human bodies like grains of sand and a few tormented “things” squirming in the background.

Issues with the subject matter aside, how does the whole thing work as an animated kids’ movie? Hit and miss would be the best way to describe the results. The films swing from loading you down with exposition so that the plot makes some level of sense to scenes that can be described as attempting to pander to children with, I kid you not, “squid kids” and other cute characters doing cute things. With the rather dull character of Howard Lovecraft as your anchor in this uneven presentation, you end up feeling a bit like a damp mop being dragged across a wooden floor by a person with a limited and uncoordinated gait – a bit dirty and wishing you could just be done. 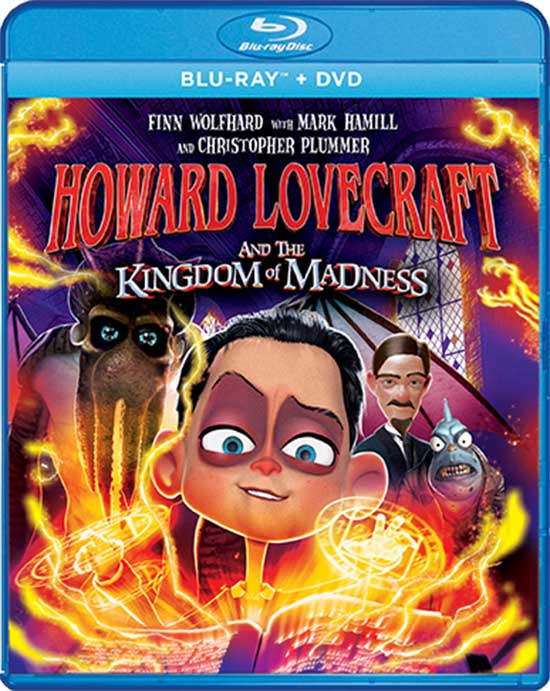 The animation/visual style gets in the way of letting yourself be full immersed in the films. At least with the first film, you can take almost any given screenshot and it could work as a comic book, or graphic novel, panel. Unfortunately, once the camera and characters begin moving, you are left with visuals that look cheap, like a budget 3D-graphics game from the mid-1990s. Yes, it does lend itself to making the whole film look wonky and off-kilter that the blending of multiple dimensions could explain. Or it could just be the animation software was inherited from the film “Foodfight!” The follow-up films do not improve on the animation, although it appears they attempted to incorporate some stylistic touches from “A Nightmare Before Christmas”. Unfortunately, most of the objects, moving or not, do not seem to actually inhabit their environment, meaning they look inserted into whatever “set” created for the scene instead of appearing to actually be a part of the world you are looking into.

Finally, you have the voice acting. What a mixed bag! You have professionals such as Christopher Plummer, Doug Bradley, Jane Curtain, Mark Hamill, Jeffrey Combs, and Ron Perlman who do uniformly solid work. On the other side of the line, you have nearly every member of the O’Reilly family filling in most of the average roles, and the results are not warm and fuzzy. The non-notable cast tries from time to time, but the energy in the performances seems to be missing in action. Howard ranges from bored to indifferent with the occasional burst of shouting. Howard’s mother has odd pauses in her dialogue that I have no explanation for. Finally, the “squid kids” are monotonous and squeaky in an attempt to snare – really young kids? Anime fans? I have no idea to whom these very annoying voices are intended to appeal. 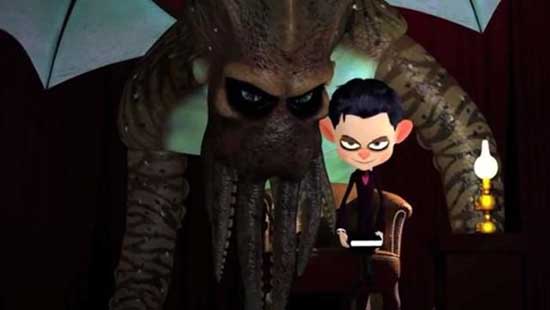 I would spend some time discussing how the movies differ from the graphic novels, but I have only read the first one and frankly do not intend to spend $30 for the remaining two graphic novels. In quick terms, the graphic novel is much, much darker, especially the ending in which Howard is actively hiding his father’s journal so that he can possess the power of the Necronomicon. In the film, we get a story that spends a lot of time developing the “squid kids” family. They were not in the first graphic novel, so that should give you an idea of the large rewrite the story underwent to make it more kid friendly.

“Howard Lovecraft and the Frozen Kingdom” is the first film. It is the most primitive-looking of the three, especially when the characters and camera are moving, but it is interesting enough to keep you watching, at least until the “squid kids” show up, causing the entire film to slam to a halt. Howard learns of his father’s travels and that he is touched by the legacy of madness and traveling to different realities. 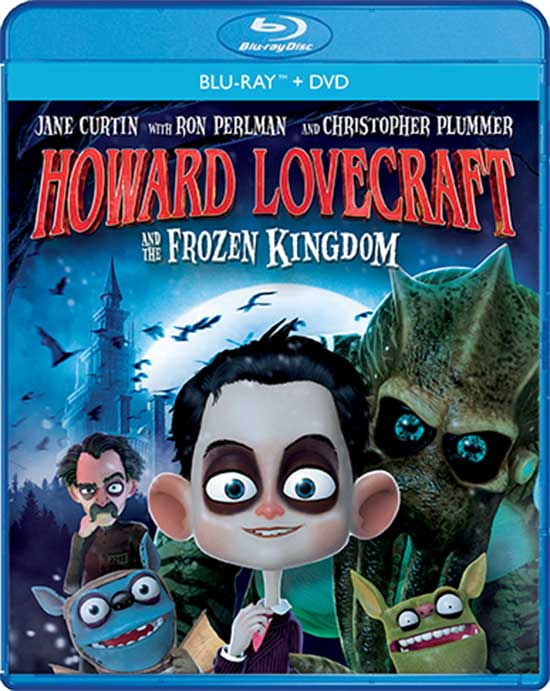 “Howard Lovecraft and the Undersea Kingdom” introduces Dagon and King Abdul to expand the lore and to provide a new primary antagonist as Abdul holds Howard’s family in thrall to force the boy to recover the next journal that has been hidden away. The narrative is somewhat more complex, but the animation still feels cheap, and the voice acting is still only halfway appealing. Before you ask, the “squid kids” return to stomp the brakes on an already slow-moving movie.

“Howard Lovecraft and the Kingdom of Madness” is the final film, at least for the present. A relative that no one seems to remember (RED FLAG, people!!!) shows up to help young Howard as the barriers between the different realities begin to grow thin. The biggest difference this film brings is the insane level of disturbing images floating around, so this may not be a great time for any kid unless they are hardcore horror fans. The film is padded with enough filler to choke a hungry horse. Admittedly, the detail in some areas of the animation has improved, but it still looks cheap. And, need I say it? SQUID KIDS!!!!!

Is the “Howard Lovecraft” trilogy worth your time? Only if you are a hardcore Lovecraft fan and must possess everything thing related, or if you really want to give your kid the most basic grounding in the Cthulhu Mythos in a moderately-okay candy version. Otherwise, if you can see them for free, give them a try. Personally, I intend to keep my copies handy; I have yet to find ANYTHING that will put me to sleep faster than these movies. 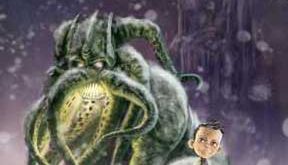