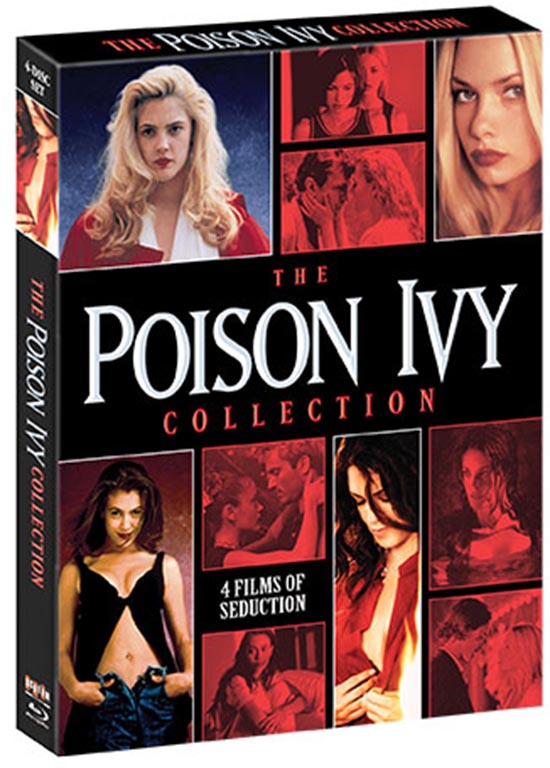 The delightfully sleazy neo-noir Poison Ivy films make their Blu-ray debuts February 12th, 2019 as a four disc Blu-ray box set from Scream Factory. This collection of sinister psychodramas also includes a new audio commentary with co-writer/director Katt Shea, as well as both the rated and unrated versions of each film. Fans can pre-order their copies now by visiting ShoutFactory.com

Tempestuous young Ivy (Drew Barrymore) befriends introverted teen Sylvie (Sara Gilbert) and seduces her way into the lives of Sylvie’s wealthy family in Poison Ivy. In the piquant follow-up, Poison Ivy 2: Lily, a sheltered art student (Alyssa Milano) finds Ivy’s diaries and, after reading them, is lured into uninhibited risk-taking to become a wild woman! Then Ivy’s sister (Jaime Pressly) visits the Greer residence in Poison Ivy: The New Seduction, and it doesn’t take long for her to use her skills of manipulation to throw the household into a slate of panic and deceit. A college freshman (Miriam McDonald) is invited to join an exclusive campus sisterhood, where cold blooded ambition causes the group to seduce, blackmail or do away with anyone that gets in their way in Poison Ivy: The Secret Society.