Praised as an “intriguing and bloody psychological thriller” (Amos Lassen) that is “thrillingly unpredictable” (Gay Essential) with “a plot that has seemingly never-ending twists and turns” (queerguru), DEVIL’S PATH held its world premiere at FilmOut San Diego, where it won awards for both Best First Narrative Feature and Best Supporting Actor. The film went on to have a healthy festival run, including screenings at NewFest, Atlanta Out on Film, Cinema Diverse Palm Springs, Chicago Reeling, and both qFLIX Philadelphia and Worcester, where it won the First-Time Director Award at the latter.

DEVIL’S PATH stars Stephen Twardokus (An American Ghost Story) and JD Scalzo (The Broken Rose), and is proudly produced by Steve Callahan and Jon Gale, both who also executive produced alongside Deborah Bashur and John Scheve.

“Montgomery has crafted a clever, taut, thriller that has an incredible amount of twists, yet never loses its terrifying grip on its audience”, said Richard Ross, Co-President of Breaking Glass. “Devil’s Path is a perfect hybrid for both the LGBTQ and genre audience, and an excellent addition to our catalog.”

In the early 90’s, two strangers meet in a wilderness park where gay men cruise for sex. What seems like an innocent and random meeting quickly descends into a horrific nightmare. With recent disappearances and attacks, the two men soon find themselves in the terrifying position of being the next victims in a deadly game of cat and mouse. As they flee further into the woods to escape the danger, they begin to understand that the greatest danger of all may be closer than either of them realizes. Will these two strangers be able to work together to defeat the darkness that has settled in on Devil’s Path? Or will their own secrets and lies lead them to be the next two missing persons in this perilous park?

“We are thrilled to be working with Breaking Glass Pictures and having Devil’s Path
added to their impressive list of titles”, said Montgomery. “They are known for their strong relationships with independent filmmakers and providing all genres of content. I’m excited that we get to be part of that family.” 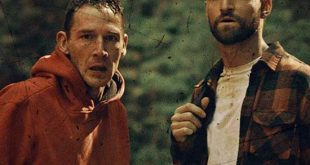