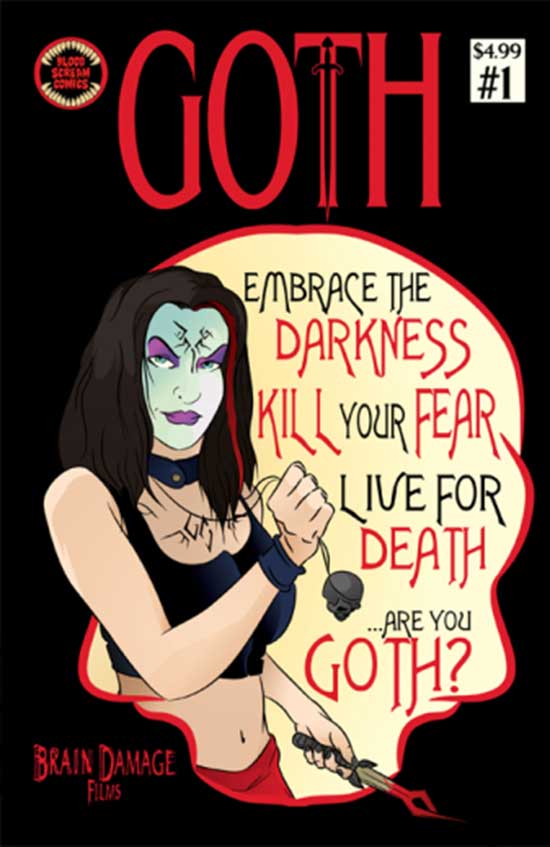 In this comic book prequel we find out what Goth was up to before the events that occurred in Brad Sykes’ 2003 film of the same name and get a few hints about her mysterious past.

I feel in love with Goth when I saw it back in 2003 and think that it is one of the most underrated films ever, so I was very excited when I heard that Blood Scream Comics was doing a comic book series based on the movie. I was even more excited to get my hands on the first issue and was really expecting some great things before I dove into it. I am happy to say that it met all my expectations and I enjoyed the hell out of it for several reasons.

I thought that it was a very interesting comic and I am really digging the premise so far. It starts out with Goth agreeing to kill the wife of a man that she knows only to discover that there is more to her intended victim than she realizes. Both Goth and the readers are in for a surprise when she confronts the woman and I thought that it was a nice little twist that I didn’t see coming. We also get a few clues about the title character’s past and I also thought that this was a cool idea as well. I had always wanted to know more about Goth’s background and this issue sets all that up for us with a nice supernatural element that is quite awesome in my opinion.

It is obvious that writer Natalie Claude gets the character as the comic is extremely well-written. In the past I have read comics that were based on movies where the writer had the characters act entirely different and it just didn’t work but that is not the case with this issue. As I was reading it, I kept hearing the voice of the great Phoebe Dollar (who played the character in the film) in my head whenever Goth spoke and that helped me enjoy things even more. As I said earlier, I dug the fact that Claude put a cool supernatural spin on Goth’s origin and I think that it works and makes her even more interesting than she already was (which is impressive as she is an amazing character for many reasons). Claude is a talented writer that just gets it so to speak and I am glad that someone who is apparently a fan of the movie and understands the character got the opportunity to work on this book because I’m afraid it wouldn’t have worked otherwise since Goth is so unique and different (in a good way). 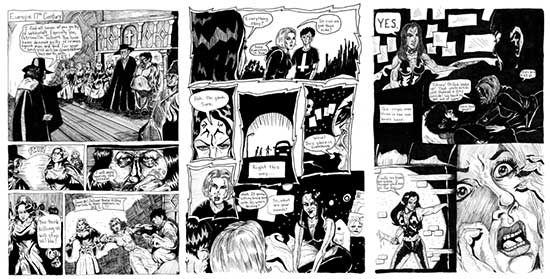 The artwork looks great as well. Artist Damien Brunk did an excellent job with pencils and as a result Goth looks like she’s supposed to look. I remember reading the Buffy the Vampire Slayer comics back in the day and not really being able to get into them because none of the characters looked like their TV show counterparts. That wasn’t an issue with this comic as Goth looks like Phoebe Dollar thanks to Brunk’s talented hand. I just thought that the artwork in general was top notch and everything looks great in general. I also love the fact that the comic is in black and white as opposed to color as it really helps capture the overall tone and I don’t think that this would have been as effective had it been in color.

I really loved Goth Issue 1 and can’t wait for the next installment. This issue ends when things are really getting interesting and left me wanting more. I can’t wait to see what happens next and I am sure that everyone that picks up this issue will feel the same way. If you are into the movie then you will really be into this comic too and will not be let down. I am really hoping that this comic is a huge hit and that Sykes decides to adapt it into a film somewhere down the road as a result because I would love to see Goth in a movie again soon. Grab a copy of this comic when you get the chance, I think you will dig it as much as I do.

You can find Goth Issue #1 at
bloodscreamcomics.com/
While you are there check out all their other great comics as well! 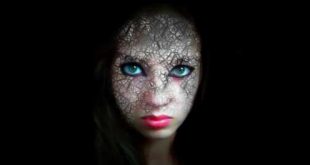