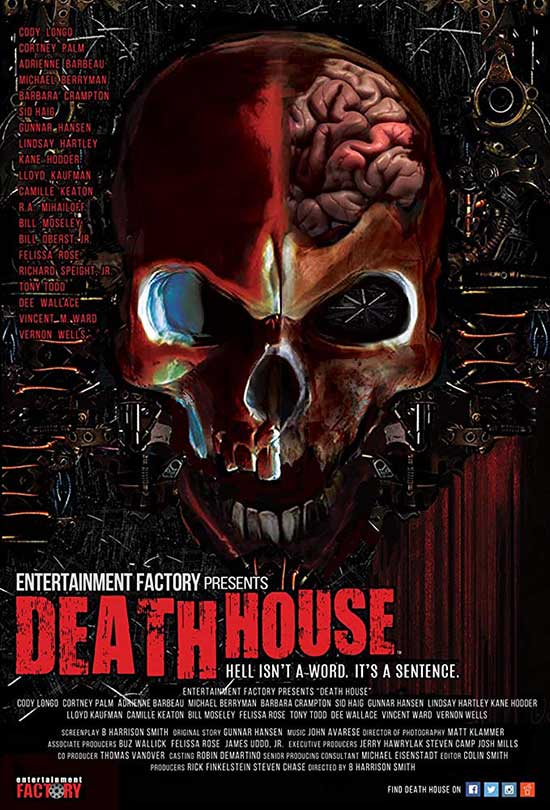 During an exclusive tour, a power breakdown inside a secret prison known as the Death House sends two agents fighting through a labyrinth of horrors while being pursued by a ruthless army of roaming inmates. As they fight to escape, the agents push toward the lowest depths of the facility where they learn a supernatural group of evil beings is their only chance for survival.

Back in 2014/2015, the legendary Gunnar Hansen (the original Leatherface from 1974’s The Texas Chainsaw Massacre) began writing a script for a feature film that would bring a number of horror legends together in the same cast. Unfortunately, as we all know, Hansen passed away in late 2015. But the idea was just too good to let slip away unfinished, so writer/director B. Harrison Smith (see Camp Dread, Zombie Killers: Elephant’s Graveyard, and Garlic & Gunpowder) took what Hansen started and added his own touches. A trailer appeared at a 2016 Days of the Dead convention, and projected release dates came and went. Now, close to four years later, we finally have the much-awaited release of what has been affectionately nicknamed “The Expendables of Horror”: Death House. 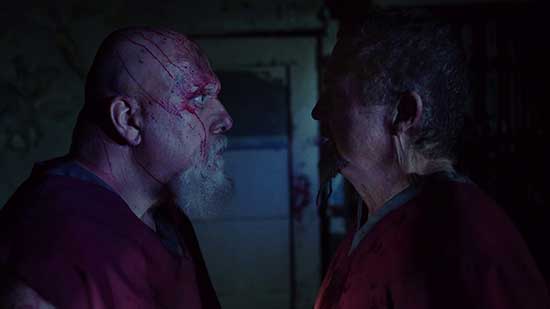 The eponymous Death House is a high-tech, top secret prison complex where the worst of the worst are held and studied in a variety of controversial ways, some of which may be traced back to WWII Germany, if you catch my drift. While on a tour of the compound, our protagonists Agent Boon (Cortney Palm; Sushi Girl, Zombeavers) and Agent Novak (Cody Longo; Piranha 3D, Days of Our Lives) are introduced to a number of doctors and researchers, given a behind the scenes look at some of the experiments, and end up trapped in an elevator with Dr. Fletcher (Dee Wallace; The Hills Have Eyes, Cujo, The Howling) when a device goes off inside the complex and knocks out power and communications. The idiom “all hell breaks loose” is normally an exaggeration (as well as the title of a great Misfits song), but in this case it’s a pretty accurate description of what happens when the devices and safeguards designed to subdue the nastiest, most vicious killers around simply stop working. 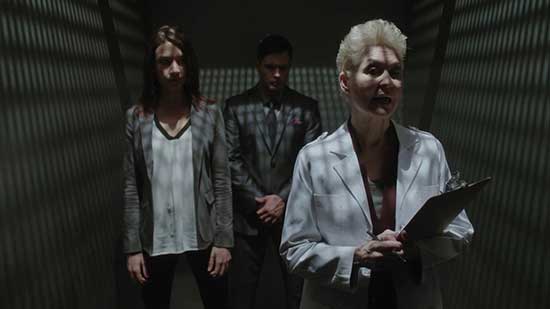 While the first half of the film is all about the specifics of the Death House, dropping an infodump of whos, whats, whens, and whys, not to mention introducing a number of the criminals held within the walls (special mention to “the 3 Satans,” played by Sean Whalen [The People Under the Stairs], Bill Oberst, Jr [Nude Nuns with Big Guns and the upcoming 3 From Hell], and Bernhard Forcher [The Man in the High Castle]), the second half is non-stop action with the inevitable prison riot. The inmates get loose, they start killing the guards (and each other), and soon, neo-nazi thug Sieg (Kane Hodder; both Jason from many Friday the 13th films and Victor Crowley from the Hatchet films) takes charge and leads the pack on a mission to eliminate the staff and find “the Five Evils.” Things get a little muddled here, but Bill Moseley (Otis of The Devil’s Rejects), Michael Berryman (Pluto of The Hills Have Eyes), Lindsay Hartley (soap opera veteran, from Passions to Days of Our Lives to All My Children), Vernon Wells (Wez from The Road Warrior), and Vincent M. Ward (Oscar from The Walking Dead) play the worst of the worst, and we’ll hopefully have a bit more light shed on these characters in Dawn of 5 Evils, the Death House prequel currently in pre-production. 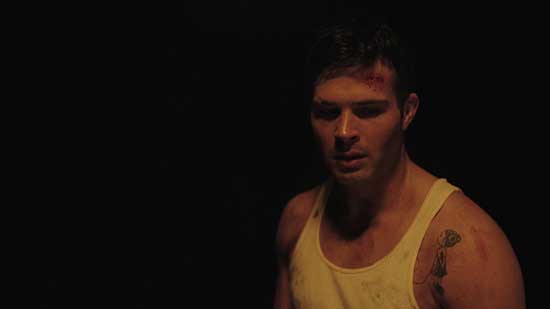 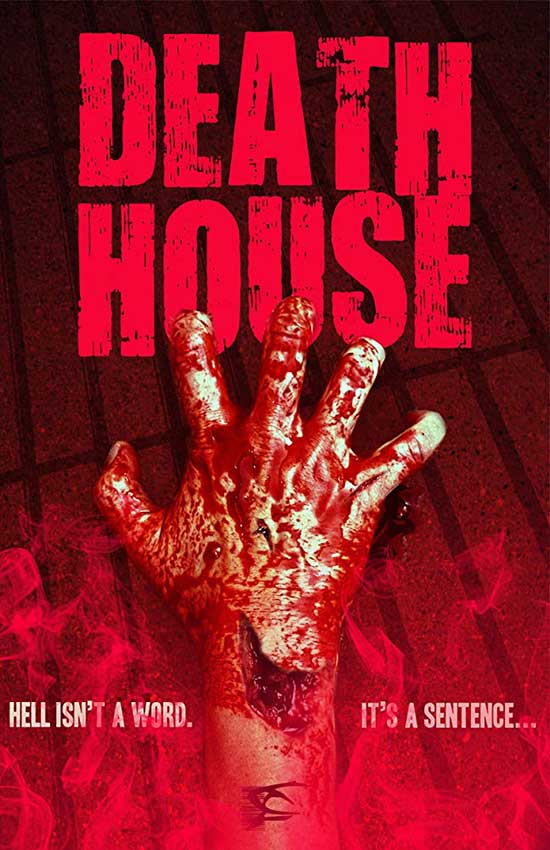 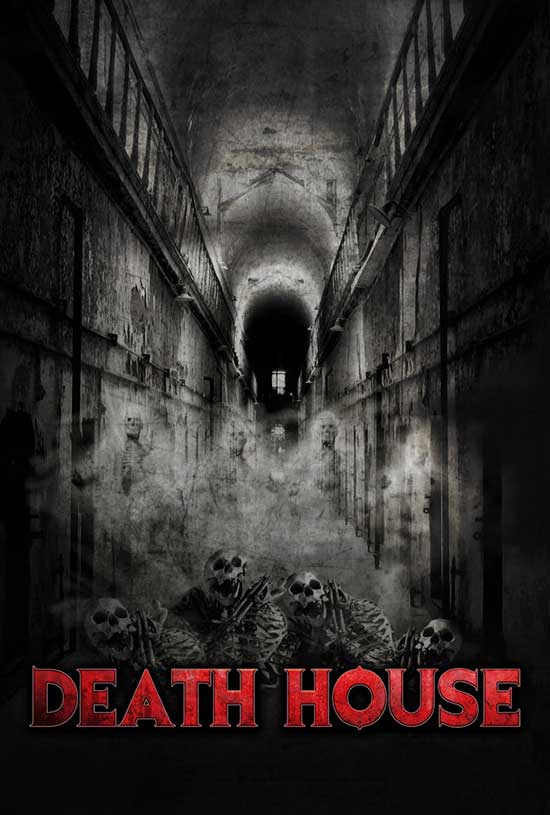 There is so much going on in this film, it’s hard to touch on every facet without laying down page after page of spoilers. Unfortunately, this also means that the story becomes a bit hard to follow at times. Sometimes this confusion leads to moral questions: the doctors are working on a system of instilling morality into these criminals, but whose definition of “moral” is “correct”? There’s even a bit of a twist thrown in, something that is hinted at as early as the first act, but it raises even more questions that the story is unable to answer. There are characters we have to assume a lot about in order to make sense of them, i.e. Tony Todd (Candyman) in the opening scene, but we never know for sure if we’re right. A lot of the film feels off, a bit disjointed, and whether that is due to being written by two separate people at completely different times, or the studio requesting changes/edits, or the sometimes-stiff acting, it’s hard to say. Suffice it to say, it’s understandable that this film didn’t end up perfect, but we still wish it had. 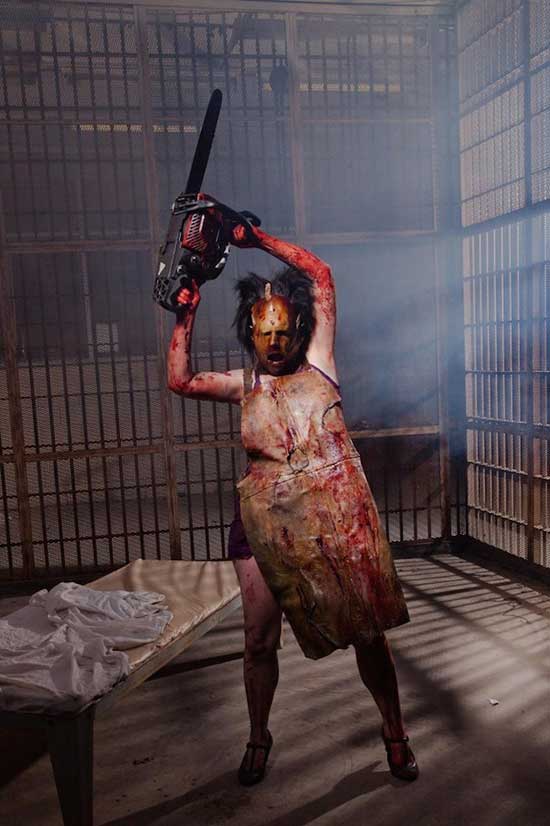 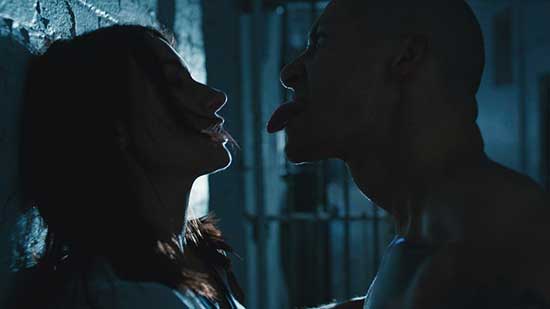 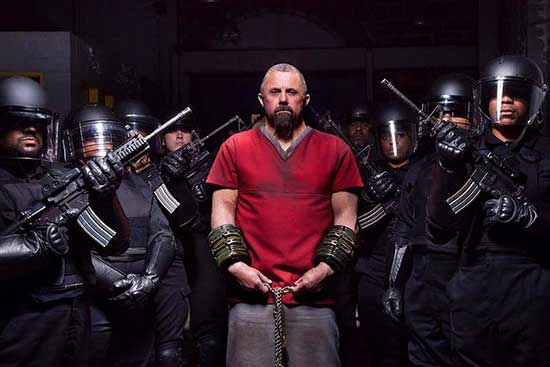 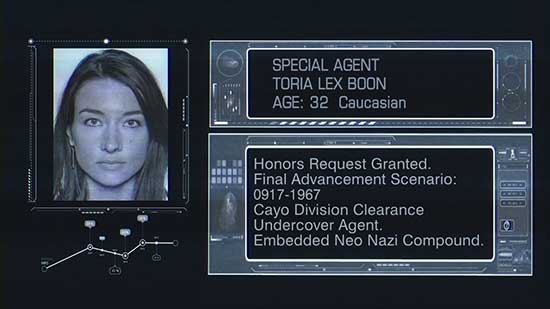 But let’s be honest here: the majority of people checking out Death House are die-hard horror fans here for the legends, playing “Name That Star” as they watch. Yes, there are a ton of familiar horror faces here, at times exhibiting more star power just in the extras in a given scene than other films do over 90 minutes. Aside from those already named, there’s Barbara Crampton (Re-Animator) as Dr. Redmane, Sid Haig (House of 1,000 Corpses) as the Icicle Killer, Felissa Rose (Sleepaway Camp) as Dr. Angela Freeman, Lloyd Kaufman (Troma) as Dr. Chalice, and even Adrienne Barbeau (The Fog) as the narrator. There will be a lot of temptation on the part of the audience to question the filmmakers – Why wasn’t (fill in your favorite horror icon here) in this film? Why are legends like Debbie Rochon, Tiffany Shepis, Camille Keaton, and Brinke Stevens playing bit roles, while soap opera stars are in featured roles? Where’s Robert Englund? In answer to these questions and more, I can only remind audiences that we can’t always get what we want, and maybe the actors we’re looking for couldn’t do it, or didn’t want to do it, so let’s make sure to evaluate what is on screen, not what isn’t. Because really, if nothing else, we got a big movie with OUR stars in it, and while there are plenty of problems, there are just as many (if not more) bright moments. 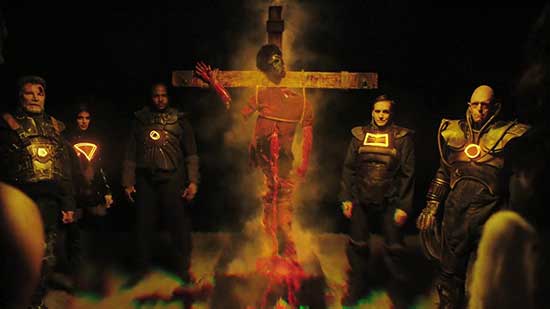 It’s not perfect, but Death House is recommended for horror fans who love action as well as audiences who come up with drinking games to go along with their favorite B-movies.