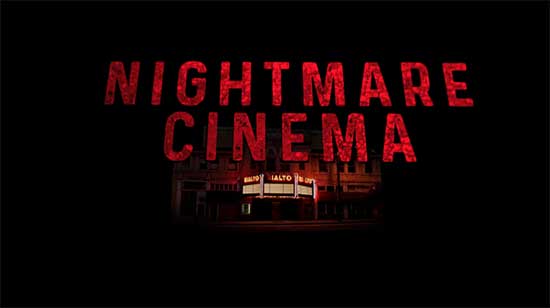 NIGHTMARE CINEMA follows a series of five unlucky individuals who, after stumbling upon the dilapidated Rialto Theater, are trapped and tortured by the mysterious Projectionist as he plays each of their greatest fears on the theater’s silver screen. Good Deed Entertainment has been involved with the title since 2015, developing the project in-house, co-producing and now distributing. Mark Canton and Courtney Solomon’s Cinelou Films boarded the film in late 2016 to finance and produce. The movie premiered at 2018’s Fantasia Film Festival, where it was the Opening Night film, earning strong positive reviews from critics and audiences alike. It will have its US festival premiere at the NY Horror Film Festival on November 29th, 2018. The film is set to be released in Theaters and On-Demand in 2019.

Mickey Rourke stars as the ghost-like Projectionist who serves as the common link for each of the five twenty-minute shorts. Rourke is best known for his role as Randy ‘The Ram’ Robinson in THE WRESTLER, for which he was nominated for an Academy Award, and 9 ½ WEEKS in which he starred opposite Kim Basinger.

Each segment of the film is directed by a different horror great from around the world, from Japan to Cuba to the US. Mick Garris, represented by Echo Lake and Paradigm, and Alejandro Brugues both directed and wrote their respective shorts DEAD and THE THING IN THE WOODS. Joe Dante directs the short MIRARI written by Richard Christian Matheson and Ryuhei Kitamura directs MASHIT written by Mexican author and filmmaker Sandra Becerril. Lastly, David Slade is at the helm of THE WAY TO EGRESS, based on the short story Traumatic Descent written by Lawrence C. Connolly. Connolly co-wrote the short film with Slade.

“We have been involved in this film for 3 years, and we couldn’t be more excited to continue working with our partners at Shudder and Cinelou to give NIGHTMARE CINEMA the release it deserves,” said Scott Donley, Founder & CEO of Good Deed Entertainment.

Courtney Solomon and Mark Canton Co-CEO’s of Cinelou Films have stated, “We knew when this project first came to us that it was something special. Not just the unique concept, but also the supremely talented group of directors, made this a film we wanted to get behind and produce. We couldn’t think of better hands for it to end up in than those of Good Deed.”

Good Deed Entertainment’s Brandon Hill and Paradigm brokered the deal along with Ian Brereton from Cinelou Films. Fortitude is currently selling the foreign distribution rights at the American Film Market.