Home | SHUDDER streaming Unveils its Scary Collection of Movies and Series for October! 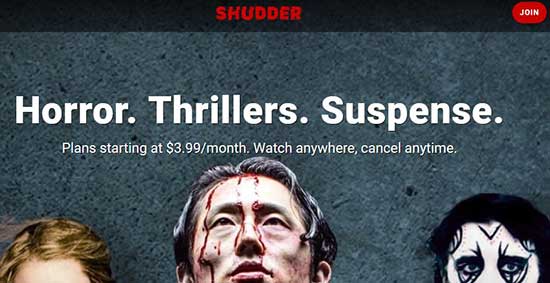 Before you experience David Gordon Green’s 2018 Halloween—a direct sequel to Carpenter’s original set 40 years later—revisit the classic that popularized the “slasher” genre and introduced the world to Michael Myers.

Each episode tells one real horror story, based on true testimonies, brought to life through straight-to-camera documentary interviews and beautifully scripted drama. The spine of each film is the gripping retrospective narrative of a series of traumatic events and horrifying happenings — inexplicable paranormal activity and weird ghostly goings-on — which happened to real, ordinary people. A SHUDDER EXCLUSIVE SERIES

The third installment of the hit Creepypasta anthology series introduces Alice and Zoe Woods, sisters who have moved to a small town to start over—but instead encounter the hellish neighborhood of Butcher’s Block, home to sinister Joseph Peach and his eerily charismatic family. Directed by Arkasha Stevenson, starring Holland Roden, Olivia Luccardi, Rutger Hauer, Krisha Fairchild and Brandon Scott. ONLY ON SHUDDER

Director: Joko Anwar, Cast: Ayu Laksmi, Bront Palarae, Tara Basro
After her ill mother passes away, evil entities start to terrorize and even possess Rini’s family. To protect her little brothers, Rini traces back the roots of the evil and learns the horrifying truth. A remake of the 1982 film of the same name, Satan’s Slaves was the highest grossing release of 2017 in Indonesia.

Director: Demián Rugna, Cast: Maxi Ghione, Norberto Gonzalo, Elvira Onetto
No one can explain what is going on in an ordinary suburban neighborhood in Buenos Aires. Voices are being heard from kitchen sinks. Bodies are levitating. Evil is here. It is up to a doctor, her colleague, and an ex-cop to get to the bottom of this neighborhood nightmare.

Director: Andy Mitton, Cast: Alex Draper, Charlie Tracker
A separated father and his estranged twelve-year-old son head to Vermont to repair an old farmhouse —and, hopefully, their relationship—until a terrifying encounter leaves him doubting whether he can protect his son from an evil making its way into their heads, and hearts.

Summer, 1984: The perfect time to be 15 years old and free. But when young conspiracy theorist Davey Armstrong begins to suspect his police officer neighbor might be the serial killer all over the local news, he and his three best friends begin an investigation that soon turns deadly.

Halloween 4: The Return of Michael Myers (1988, Dwight H. Little) Ten years after his original massacre, the invalid Michael Myers awakens and returns to Haddonfield to kill his seven-year-old niece on Halloween.

Halloween 5: The Revenge of Michael Myers (1989, Dominique Othenin-Girard) One year following the events of Halloween 4, Michael Myers returns to Haddonfield with a vengeance.

Fido (2007, Andrew Currie) When Timmy’s mom brings home a zombie servant, he discovers a new best friend and is determined to keep him, even if his zombie ate the next-door neighbor.

American Psycho 2 (2002, Morgan J. Freeman) An aspiring criminologist (Mila Kunis) kills anyone who stands in the way of her success.

Open Your Eyes (1999, Alejandro Amenabar) Cesar is a handsome playboy who has it all, until he falls hard for the beautiful Sofia (Penelope Cruz) and a jealous ex involves him in a car accident that disfigures his face.

Right at Your Door (2007, Chris Gorak) With Los Angeles under siege by toxic bombs, Brad and Lexi struggle to survive with few supplies, limited time and no information.

Late Phases (2014, Adrián García Bogliano) When deadly beasts attack, it is up to a grizzled veteran to uncover what the residents of a secluded retirement community are hiding.

A Girl Walks Home Alone at Night (2015, Ana Lily Amirpour) Strange things are afoot in Bad City. The Iranian ghost town, home to prostitutes, junkies, pimps, and other sordid souls, is a place that reeks of death and hopelessness, where a lonely vampire is stalking the towns’ most unsavory inhabitants.

The Old Dark House (1932, James Whale) Stranded travelers stumble upon a strange old house, and find themselves at the mercy of a highly eccentric and potentially dangerous family.

The Awakening (2012, Nick Murphy) Hoax exposer Florence Cathcart (Rebecca Hall) discovers a terrifying truth at a boarding school, and soon the ghost hunter becomes the hunted in this shocking mystery.

AMC Networks’ SHUDDER is a premium streaming video service, super-serving fans of all degrees with the best selection in genre entertainment, covering thrillers, suspense, and horror. SHUDDER’s expanding library of film, TV series, and originals is available in the US, Canada, UK, Ireland and Germany on most streaming devices for 4.99/month or 49.99/year. To experience SHUDDER commitment-free for 7 days, visitwww.shudder.com.