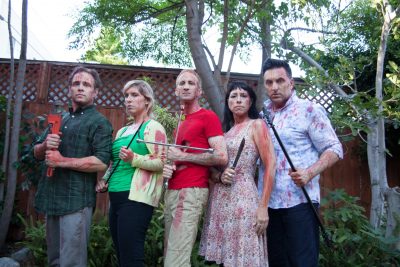 The Lucky Strike Films Studio and Festival is the brainchild of multi-talented and acclaimed filmmaker Romane Simon. Simon created the event to honor excellence in the arts from newer, rising stars to those that have been in the industry for over many years. 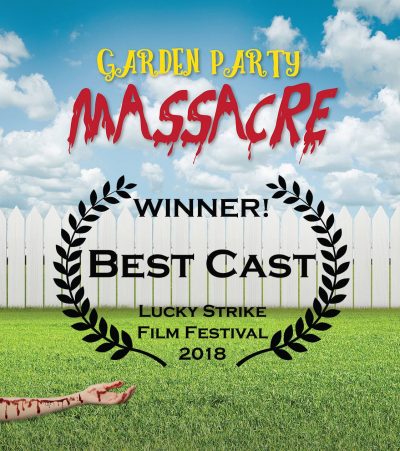 The film is a fast-paced, wacky spoof in the vein of ‘Shaun of the Dead’ and ‘Tucker and Dale vs. Evil’. The fun begins when a friendly backyard gathering goes hilariously awry as an unexpected guest arrives. With a pickaxe. And an attitude. It’s a madcap brew of murder, mirth and mayhem starring Andy Gates (“Grimm”), Nichole Bagby (“On The Rocks”), Lise Hart (“Deadly Revisions”), Gregory Blair (“Escape The Night”), Dawna Lee Heising (“Revenge of the Samurai Cop”), Matt Weinglass (“Jimmy Kimmel Live!”) and David Leeper.

The crowd-pleasing screwball comedy meets slasher spoof will hit the market in the coming months via SGL Entertainment. This is the second film from writer/director Gregory Blair and the second collaboration with SGL Entertainment–Blair’s award-winning, slow-burn psychological thriller DEADLY REVISIONS being the first.

GARDEN PARTY MASSACRE is a PIX/SEE Productions film and will be released only on Blu-ray and DVD for a limited time prior to rental and streaming options via such platforms as Comcast, Hulu, iTunes, Amazon Prime, Google Play and more.