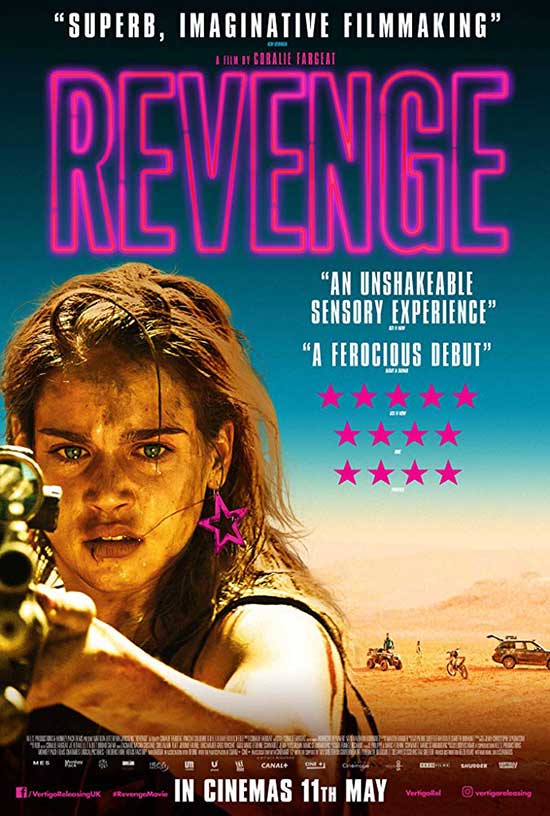 Never take your mistress on an annual guys’ getaway, especially one devoted to hunting – a violent lesson for three wealthy married men.

Jen sits alone in a bedroom. Alone despite the man who sits with her, needling her for reasons as to why she does not find him sexually attractive. In spite of herself, she has to be apologetic in tone to stop his pathetic pride from being hurt. She is beholden to his impotent rage. She walks that precarious tight rope of ensuring she keeps him docile enough that he’ll get bored and leave her alone.

And then he rapes her.

That scene in Revenge, directed by Coralie Fargeat, is unfortunately going to resonate with too many people. It’s going to make a lot of people very angry. It’s a film that really needs to be watched.

Before her sexual assault happens in the film, Jen (Matilda Lutz, Rings) is introduced to us as a bubbly 20-something embarking on a dirty weekend with her married boyfriend, Richard (Kevin Janssens, The Ardennes). Based on how he pampers her, she’s clearly an object of lust. It’s an unlikely coincidence that in her big rimmed sunglasses, sucking on a lollipop, she is reminiscent of Sue Lyon in Stanley Kubrick’s Lolita. This objectification reaches its apex (or should that be nadir) when Richard’s two friends, Stan (Vincent Colombe) and Dimitri (Guillaume Bouchède), arrive at his house a day for a pre-planned hunting trip.

Disappointed her weekend with her beau is cut short, Jen makes the best of it; drinking, laughing and dancing with the men during a boozy evening. Sadly, one of them takes her kindness too far, leading to them raping her. After confessing to her boyfriend about what has happened, Richard tries to pay her off. After all, we can’t call the police, his wife will find out. And so, he tries to kill her setting off a chain of violent events.

Much has been by detractors of the film that it wallows in fantasy. They use one of the key set pieces in which Jen survives being impaled on a tree as their case in point. Rambo can take on an army, John McClane can wrestle a fighter jet, Charles Bronson can clean up the Bronx, but a woman can’t survive anything less it seems. The truth is Revenge is a fantasy in the same way Kill Bill is. Fargeat’s use of blood and violence is especially cartoonish, but to berate this film for logical fallacies that are championed in dogeared franchises highlights the problems bubbling loudly within the real world, as well as arts and culture.

Symbolism runs rife through Revenge from Stan and Dimitri spying on Jen through literal rose tinted Windows, to Jen being branded with a phoenix, through to the blood splattered corridor which sees a naked man slipping and sliding around in anger. That last example is telling as Jen also loses the majority of her clothes by this point as well, but whilst her victim looks stupid and vulnerable, she glows with vital anger and dominance. There is no titillation here. To quote Hannah Gadsby’s spectacular Nanette: There is nothing stronger than a broken woman who has rebuilt herself. 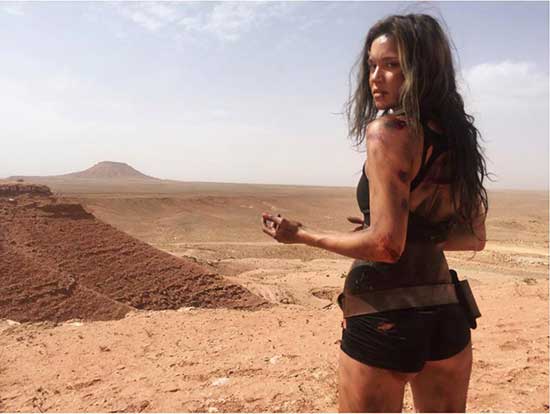 As Jen, Lutz convinces as she evolves from victim to emboldened perpetrator. Meanwhile, her nemeses are creepy simply by how normal they look. Handsome, funny and dopey in that order, they shatter the Hollywood trope of rapists all looking suspicious from the minute you meet them.

Vibrant, violent and essential, Revenge is the kind of film to be expected in this current climate. Get on it now.