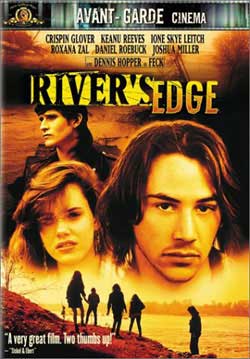 A high school slacker kills his girlfriend and shows off her dead body to their friends. However, the friends’ reaction is almost as ambiguous and perplexing as the crime itself.

Hell-o, everyone. I have a special review for a somewhat lost gem of a film for you. This film is based off of the actual events of a horrifying murder in California. That and a group of friends that the Writer had grown up around and gone to school with. There is also an amazing cast that entertains in their own way throughout the film… River’s Edge.

As much comedy as the film appears to have, it is also obscuring the darkness that lies between the plot. As dark as some of the subject matter may be, there is brilliant comic relief (for those of you that need it) throughout the film. The characters are hilarious themselves as well and very well acted out and delivered. It is one of my favorite characters of each of the well knowns today ( Keaunu Reeves, Crispin Glover and Dennis Hopper). The rolls of the film which are unforgettable in my eyes.

Keaunu Reeves (Constantine) plays the part of the burn out teenager “awesomely (as he usually does… or did back then).” He argues with his mother, picks on and protects his bother and watches after his sister all within the duration of hiding the secret of a dead girl by the river. He is almost comparable to Ted Theodore Logan or his character in Parent Hood… only a little more out there. Of my favorite Reeves Teen character, this would have to be it. His name is Matt in this one. He is torn between keeping a friend’s dark secret locked away inside or turning him in as well as turning his back on a friend.

Crispin Glover (Willard, Friday the the Thirteenth IV: The Final Chapter , Wizard of Gore re-make and now in production, The Ice Cream Man) is his other stoner burn out friend and does a laughably well job (I mean that in a very good way) at portraying it. He is a paranoid best friend who is always looking for pot. He can also bring his friends to get it, for a fee in gas money. He even cons them into riding with him, just for the taxi gas fee. He is out to help a friend that he grew up with from going down for murder. He will also pick a fight with other friends that are not willing to do so. His verbal delivery is one of the most memorable I’ve seen. He makes George McFly seem normal by comparison. My favorite delivery of his consists of taking the signature cry… “God Dyamiiiiiiit!”

Finally, closing out the list of stellar performances of the insane, we have someone that knows these rolls all too well. He was a wack job, almost as crazy as the chainsaw slinging family themselves as Lefty Enright in Texas Chainsaw Massacre II. He was psychotic in Blue Velvet as Frank “Don’t you f*cking look at me!” Booth. He was a lunatic on an explosive power trip that could snap at any time as Howard Payne in Speed (where he teams up with Keaunu Reeves once more, this time not to sell him drugs, but to kill him). He also showed us his directional talents in Colors. He is a dude of many colors himself, Dennis Hopper. His character as Feck is no exception to his ability to be weird and crazy… or homicidal for that matter.. Fleck is an aged man that freely gives marijuana to the teens as they seek him out to support their habit. He also tells them repeatedly of how he shot a girl once. Fleck is paranoid in his own blacked out word within his home. Once more, Dennis does not disappoint in a roll that you would almost think he was actually crazy, if you didn’t know his name already… Which you should by now. He’s been around and I doubt his career will end anytime soon, which is a very good thing.

Besides the heavy hitters of the acting field, the rest of the cast put on convincingly well performances. This film has contributed samples to the metal band Distopia’s album Human Garbage as well. The dialog is quite crazy at times and at other times, quite shocking. Sometimes it can be disturbing and then funny in a dark… or even lightening since. The Gore Score is quite low, but it is a good movie all the same. There is one decaying corpse throughout the feature’s running time. The DVD only has one trailer, but the extras will be added on a re-issue, I’m sure. They should be anyway. This classic film needs to be revived and reviewed by another generation… and NOT as a re-make, but as a re-issued DVD of the original version. It is a fantastic not to be missed and never to be revamped or regurgitated as so many others have. The half way cheesy hair metal sets the time piece and tone of the group perfectly. I give this film, River’s Edge,