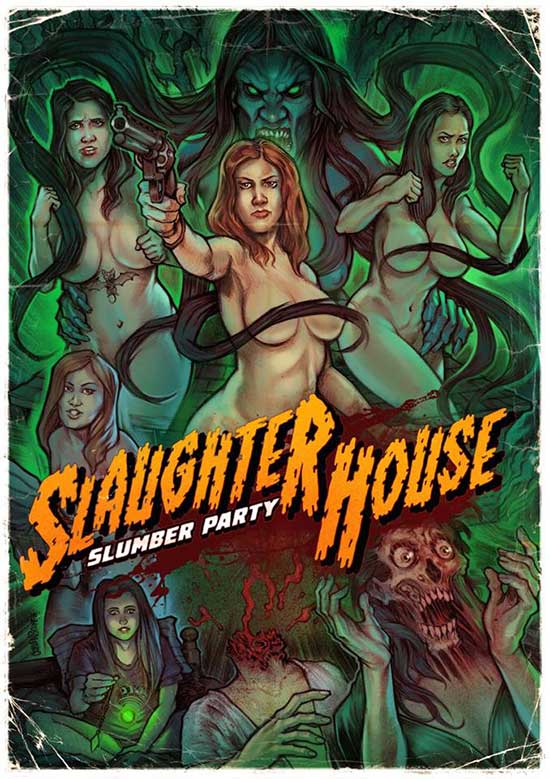 The films of Dustin Wayde Mills tend to go in one of two directions. On one hand, he has directed some of the more unique films in the genre of the last 10 years, combining an experimental, nonlinear approach with raw, visceral images and a violent sexual angle. Films like Applecart, Her Name was Torment, and A Black Heart in White Hell scrape their way into the audience’s brain and linger there for a long time. On the other hand, Mills also has a sense of humor, albeit a very dark one. Whether it’s Bath Salt Zombies or an angry Peter Cottontail in Easter Casket or the killer puppets of The Puppet Monster Massacre, this director isn’t afraid of adding laughs to his blood and guts. With Slaughterhouse Slumber Party, Mills is again looking to deliver the blood-soaked chuckles, and he’s hoping to go all out to do so.

“I think that the world of horror needs a movie like this,” said writer/director Mills. “I perceived a niche and am trying to fill it. Stuff like this isn’t being made, but I don’t think it’s because no one wants it. Things are getting a little too serious in the world. Slaughterhouse Slumber Party is unbridled, unfiltered fun. It’s all girls, gore, ghouls, and guffaws. I truly believe we need some of that right now … I am a fan of 80s horror. It was an imaginative era and a really good time for special fx. It should be obvious that Slaughterhouse Slumber Party draws a lot of inspiration from the films of Jim Wynorski, specifically Sorority House Massacre 2 and Hard to Die. The less apparent inspirations would be supernatural comedies like Beetlejuice, Ghostbusters, Big Trouble in Little China… Evil Dead II is another big inspiration. I like the whimsical horror of those films. The creatures are cartoonish, and there are lots of great hand-drawn optical fx as well as very theatrical horror atmospheres. I’m kind of trying to mash together the concept of a ‘sexy slasher’ and an 80s supernatural comedy. Weirdest of all, (this is) shot like an episode of Parks & Rec. It’s one of my favorite shows of all time, and I love how the faux documentary style adds to the humor and aids the timing of the jokes. It worked really well for What We Do in the Shadows, and I think it will work well here.”

There are some very familiar faces involved with this film, and some maybe not-so-familiar ones to keep an eye on. “I’ve worked with pretty much my entire cast before in some capacity,” added Mills. “They are all lovely and incredibly talented ladies, and I am really excited to give them the opportunity to be funny and gross and do silly stuff. Working with a large ensemble cast is pretty difficult at times, but it’s really rewarding. I trust them, and they trust me. There’s an understanding that we’re working on something bigger than all of us. When we shot the proof of concept trailer, there was some drinking on set. That probably won’t happen for the full film. Lesson learned on that one.” Erin R. Ryan (Skinless, Primordial) and Haley Jay Madison (In Memory Of, Space Babes from Outer Space) are no strangers to fans of Mills’ previous work, and both return for Slaughterhouse Slumber Party. Also gracing the screen will be Kayla Elizabeth (New Blood Rising), Joni Durian (Babysitter Massacre), Brittany Blanton (Don’t F*ck in the Woods), Kenzie Phillips (Human Nature), Roni Jonah (Volumes of Blood), and Melissa Zahs (2014’s Night of the Living Dead). Rounding out the cast are newcomers Ariel Jarchow, J. Ania Lupa, and Eve Moreau.

Given this cast of actresses, along with the writing and directing of Mills and the effects work of Marcus Koch (100 Tears, We Are Still Here, and the American Guinea Pig films), this movie seems like a no-brainer. Unfortunately, that’s not the indie horror business anymore, and Mills has had to resort to crowdfunding. “The amount we’re trying to raise is exactly the amount we need to make the movie. None of that is my salary. I’m not getting paid. It all goes to the actors, the fx, my crew, and the location. I don’t have that kind of cash, and I’m not connected enough to get the money from investors. Distributors don’t really pay for movies anymore. It’s tough to raise a budget. I know it probably seems like a filmmaker who’s been working for almost a decade with 20 some credits to his name might be able to pull together $14k easily, but that’s not my situation. I’ve run a few successful campaigns in the past. Really crossing my fingers that this one will work out.”

As with most crowdfunding campaigns – the good ones, anyway – Mills has included a lot of great perks for his backers: signed BluRays, thank yous, posters (the movie poster is by Corlen Kruger, and it is pretty damn amazing), producer credits, and even access to the uncensored trailer, which is definitely NSFW even in its censored form. Not because it is violent, or bloody, or gory, but because of nudity, something that seems a bit ridiculous in this age of terrorist attacks and school shootings and almost constant threat of war. Dustin Mills thinks so as well: “I think it’s silly that nudity is still such a taboo in our culture, (and) I don’t like the idea that it always has to represent vulnerability in horror films. Sometimes it can, sure. It can also be used to convey honesty, intimacy, and even strength. When I’m shooting nudity, I try not to be intentionally flattering with my shots and I don’t encourage my actors to stand or pose in certain ways. I like to shoot it in a very honest, matter of fact kind of way. Slaughterhouse Slumber Party has a lot of nudity and it is meant to be sexy and beautiful, but I have a set of rules pertaining to how the nudity happens in the film. There are no voyeur shots. There are no moments of the characters being forcefully disrobed. No sexual assault. The nudity in the film is almost always the choice of the characters. They are in control of their own bodies and their own sexuality. They get naked because it’s their idea. It’s never forced on them, and by the end it becomes a symbol of strength. I’m not trying to justify objectification here. I’m just trying to see if we can be sexy and kind of dirty without demeaning the characters or the actors. The actors seem to be on board with that. So, hopefully I have my head in the right place about this. As far as nudity in the genre as a whole; sometimes I like it and sometimes it gives me the willies. I think it can be cute and fun in a movie like Space Babes from Outer Space, and sometimes it can serve a darker purpose well, but there’s a whole host horror films where the circumstances of the nudity are kind of despicable.” He doesn’t name names, but I think I’ve reviewed a handful of them.

Slaughterhouse Slumber Party has the potential to be something really fun, in the vein of movies like Slumber Party Massacre (obviously), Sorority Babes in the Slimeball Bowl-O-Rama, and any combination of 1980s sex comedies and light-hearted slashers. For more information, including interviews with a number of the actresses, and to become a part of the crowdfunding campaign, please visit the Kickstarter page and donate to help make this amazing idea become a reality.