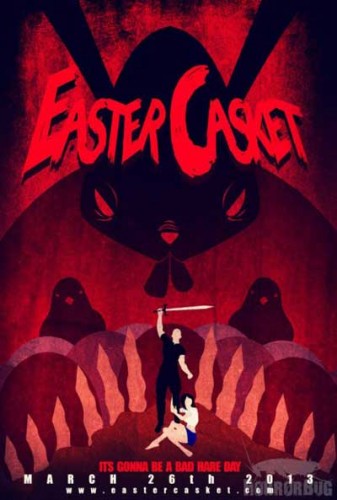 All hell breaks loose when Peter Cottontail aka The Easter Bunny hears that the Catholic Church is about to do away with all Easter rituals not pertaining directly to the resurrection of Christ. With Father Asher (A warrior priest) hot on his trail Cottontail starts a rampage leaving the bodies of the clergy (and a few schoolgirls) in his wake. Can Asher stop him before its too late?

Dustin Wayde Mills, the creator of “THE PUPPET MONSTER MASSACRE“, “BATH SALT ZOMBIES” & “ZOMBIE A-HOLE” is back with his latest no budget extravaganza and it’s his most warped film to date! “EASTER CASKET” tells the story of Peter Cottontail AKA The Easter Bunny and his displeasure with the Catholic Church because of it’s decision to cancel all Easter celebrations that don’t involve Christ’s resurrection. So what does he do? He gathers himself a posse of ninja bunnies & angry chicks in an effort to procreate with a human female so that the resulting offspring can just take the world down! By the way…Peter Cottontail is played by a puppet.

Didja get all of that? OK, just checking cuz’ it is a lot to swallow isn’t it? 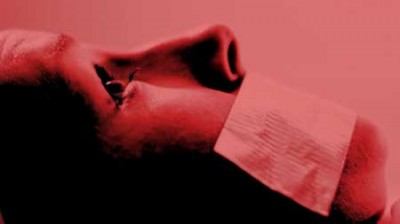 So what we have here is a rampaging bunny puppet (Voiced by director/screenwriter Mills) that sounds a bit like Ed Wynn that’s slaughtering nuns, catholic schoolgirls & priests while searching for the one woman who will bear his child. while all of this is going on the “Mega Pope” (Steve Rimpici) has sent forth a warrior priest, Father Asher (Josh Eal), to stop the maniacal bunny at any and all costs. The “Mega Pope” is a giant, glowing, floating head that reminded me of the big floating head (Zordon) that used to tell the Mighty Morphin’ Power Rangers what to do back in the day. Along the way, Asher meets a innocent young lass, Aubrie (Erin Ryan), who falls in love with him and he has to defend her as Cottontail has decided that she is the perfect vessel for his child to come into this world (After he gussies her up with some bunny ears & a bow that is). 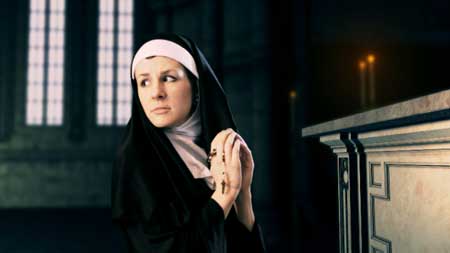 Lines like “He is the fuzzy doombringer! The fluffy harbinger of the apocalypse! The Easter bunny is the GODDAMNED ANTICHRIST” had me laughing myself right off of my sofa! All of the actors recite their lines with a straight face which couldn’t be easy but they all do a good job of it. Acting against a bunny puppet with a pervy laugh had to be hard work! Josh Eal stands above the rest as Father Asher though, he has to display no emotion at all as he mouths dialog like “Be very quiet. I’m hunting rabbits…”. I really liked all of the performances here. 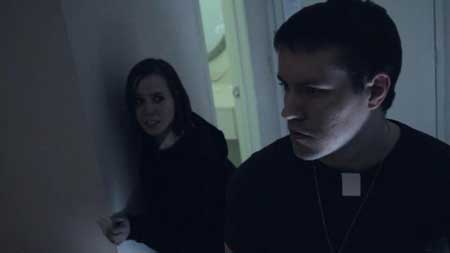 There is a copious amount of full frontal female nudity in this film which while fine by me, might not be by any of you. Especially considering the religious aspect of it all so if you’re easily offended I would stay away…far away from this film, the pope would catch a fit if he saw this. And just because the main protagonist is a puppet doesn’t mean that any little ones should see it either. Peter Cottontail is a vicious, violent, foul mouthed, misogynistic bunny rabbit that kills people in graphic fashion (I can’t believe I just wrote that!), Easter eggs that are bombs, horny members of the clergy & puppets abusing cocaine are also part of the mix here so listen to me when I say that this movie ain’t for kids.

The movie isn’t perfect of course. The performances (While quite good) are still amateurish & some of the effects lean on some ersatz CGI which didn’t look all that good (I hate CGI blood splatter) but what more could I expect on a film that cost next to nothing?

Mills runs roughshod over all taboos with reckless abandon & he’s created the best film of his career with “EASTER CASKET”! The man has more talent in his little finger than most of us have in our entire bodies. He cranks out his films on budgets of only a few thousand dollars yet they all look like they cost a lot more. I shudder to think of the awesomeness he could create with a budget in the low six figures & I wonder why some enterprising small studio hasn’t taken him on as of yet? The lunkheads at The Asylum could really use a guy like Mills on their roster. His imagination & creativity are boundless and the only thing holding him back is a lack of funds. I suspect that situation will change in the near future but I think it’s a crime that he isn’t working with bigger budgets now. 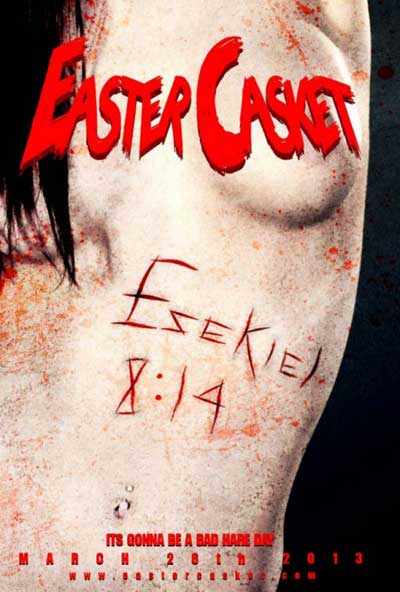 All in all “EASTER CASKET” isn’t going to win any awards anytime soon but that doesn’t mean that it isn’t a shitload of fun to watch. I am a big fan of indie horror films and if they have a sense of humor to them all the better. “EASTER CASKET” is all of that and a side of fries and I enjoyed it immensely! It’s inadequacies only serve to make it more charming if you ask me & you could do a lot worse than this on a lazy Sunday evening. Mills promises a sequel to be called “EASTER CASKET 2: Resfurrection” and I can hardly wait to see the continued adventures of Father Asher & that wascally wabbit!