PERFECT OBEDIENCE – A Horror Film of the Sexual Kind – Latest! 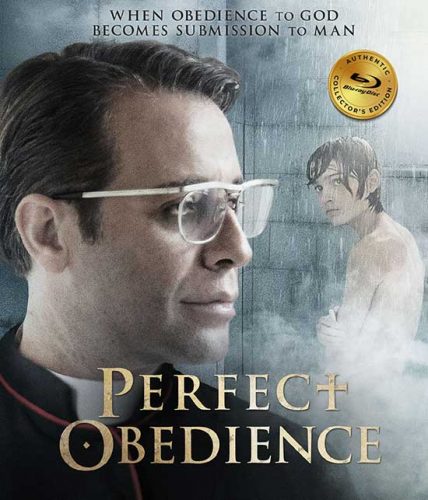 Far from being a horror film in the traditional sense, PERFECT OBEDIENCE nonetheless has its moments of shock as it tackles the dark topic of Catholic priests and their decades-long sexual abuse of boys. Artsploitation Films will release the film on DVD and Blu-ray on July 10th.

Based on true events, the film is set in 1960s Mexico and follows the impressionable 13-year-old Julian as he enters a seminary. A seminary whose code of conduct is the complete unquestioning obedience to authority. The boy soon becomes the target of desire for the seminary’s charismatic head who takes the boy under his wings. But instead of religious training, Julian soon realizes he must obey the older priest’s every command. A lurid tale told in deceptively pop, and at times even humorous, fashion.

The Catholic Church’s pedophilic sex scandals are given an explosive, controversial but oddly wildly entertaining look with this 1960s-set drama based on a true story about Legion of Christ founder and child abuser Marcial Marcial. Julian, an innocent and impressionable 13-year-old, is sent to a seminary to train for the priesthood. He is immediately immersed in this new world of religious training with the over-riding philosophy being, not so much the love of Christ, but the complete obedience to authority. The seminary, with its coterie of older priests beset with sexual tension and ever-so tempted by its young students is lorded over by the handsome and charismatic Father Angel de la Cruz. When the seemingly kindly pastor invites the attractive boy to leave the dormitory to stay at his home to continue his “training,” he feels honored, but soon realizes there is a price: his complete psychological and inevitably, physical surrender to the older man. First-time filmmaker Luis Urquiza, imbues this lurid tale with an oddly pop style (the 1960s fashions are especially impressive) and with a memorable soundtrack featuring religious music, Spanish rock and even a bacchanalian scene set to the Rolling Stone’s “Sympathy for the Devil.”