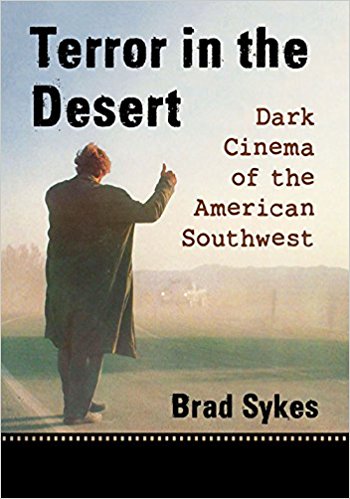 This book looks at a variety of “Desert Terror” films (movies that take place in the American Southwest) such as The Hitcher, Trip with the Teacher, The Hills Have Eyes, Fleshburn, Tremors, and many, many more.

In addition to being a very talented filmmaker, Brad Sykes also shows us that he is one hell of an author as well with his book Terror in the Desert.  I have always been interested in desert terror films such as the likes of From Dusk Till Dawn and The Hitcher (because let’s face it, the desert can be a mighty scary and isolated place), so I was very excited to check out Brad Sykes’ new book on the subject and I can say without a doubt that it is nothing short of awesome. This book is essentially an encyclopedia of films that take place in this setting (as well as the filmmakers behind these movies) and I thoroughly enjoyed reading it as Sykes knows his stuff when it comes to these movies. I had a blast reading this book and if you are into these types of films I guarantee that you will too.

One of the things that I liked the best about Terror in the Desert is that Sykes does a great job including several films that take place in this setting. Not only does he cover the better- known ones such as The Hills Have Eyes, Tremors, and The Hitcher, but he also discusses lesser known ones such as Trip with the Teacher (one of my personal favorites), Fleshburn, and Chopper Chicks in Zombietown. Sykes does a great job of taking an in-depth look at these movies and lets the reader know what they are all about. There were a few included in the book that I have never seen (and maybe even a couple that I have never ever heard of), and after reading about them it makes me want to check them out because the biggest majority of them sound very interesting and right up my alley. I thought that it was cool that he included these more obscure films in the book as I have a feeling that it will make a lot of readers out there check out these movies as a result (I know that after I am doing writing this review I am going to try to hunt some of them down).

I also dug the fact that the book is broken down into categories as each chapter focuses on a different aspect or subgenre of the desert terror movies. For example, several chapters take a closer look at films that involve death drivers, hitchhikers, and murder machines (such as Duel and The Car-which is another of my personal favorites). Other chapters discuss movies that have some sort of creatures, animals, or monsters in them including Tremors, Kingdom of the Spiders, and Rattlers just to name a few. He even devotes a chapter to the franchises that take place in the desert setting such as the Vampires and Joyride series, and at one point takes a moment to look at the Indie films that fall into this category of movies such as Route 666, Detour, and Hell’s Highway (have I ever mentioned how much I love Hell’s Highway and how underrated it is? If you haven’t seen it do yourself a huge favor and run, don’t walk, to grab a copy of it as it is a great little indie flick that I adore for several reasons). It was hard for me to pick a favorite chapter as I dug them all equally and thought that they were all very informative.

I think that the book is very well-written as well and it is obvious that Sykes put his heart and soul into it. I really enjoy his writing style as he is without a doubt an excellent writer and as I said earlier he knows his stuff when it comes to these movies. It is apparent that he did a ton of research while he was working on the book and that he worked very hard on it in general. Sykes proves that he is a very intelligent person as well as a talented writer who is very passionate about the desert terror films. To be honest, if you ever have a question about a movie that takes place in the desert all you have to do is pick up a copy of this book and you’ll find your answer very quickly because that is how well put together and comprehensive this book is. It is a who’s who of desert terror films and Sykes should feel proud because he really did a terrific job writing this book and putting it all together.

I loved Terror in the Desert and am so glad that I got the opportunity to check it out for myself. There is a lot to like about it if you are into these films, and even if you’re not I still think that you will dig this book and it will make you a fan of these movies. This book is a love letter to films such as The Hitcher, The Hills Have Eyes, The Car, and a slew of other similar films with a desert setting and is a must-read for a number of reasons. If you’re looking for a great non-fiction book about a certain genre of film that is well-written, interesting, and just a great read in general then check out this book as soon as possible. You won’t be disappointed.

You can get your copy at www.mcfarlandpub.com or by calling the order line at 800-235-2187. Terror in the Desert was published by McFarland. 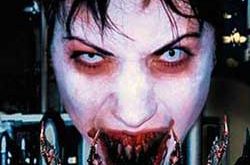