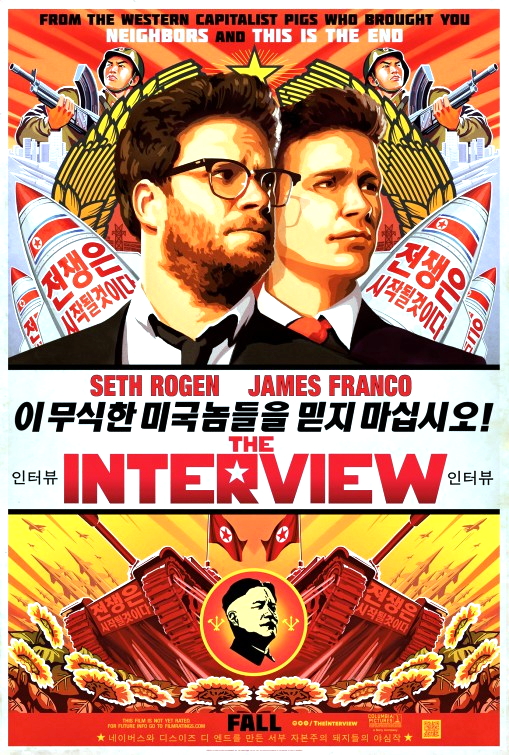 “In the action-comedy The Interview, Dave Skylark and his producer Aaron Rapaport run the popular celebrity tabloid TV show ‘Skylark Tonight’. When they discover that North Korean dictator Kim Jong-un is a fan of the show, they land an interview with him in an attempt to legitimise themselves as journalists. As Dave and Aaron prepare to travel to Pyongyang, their plans change when the CIA recruits them, perhaps the two least-qualified men imaginable, to assassinate Kim Jong-un.” (courtesy IMDB)

Freaks And Geeks (1999), the cult television show produced by Judd Apatow and created by Paul Fieg, was about gifted teenager Lindsay who befriends a gang of freaks, and her younger brother Sam who befriends a group of geeks. Cancelled after only eighteen episodes, the series was considered by some (including Time Magazine, Entertainment Weekly, TV Guide, etc.) to be one of the best television series ever made, and kickstarted the careers of several young actors including James Franco and Seth Rogen. Together with Rogen’s childhood friend Evan Goldberg, the three have collaborated on a number of films, like Superbad (2007), Pineapple Express (2008), The Green Hornet (2011), This Is The End (2013), as well as one of the most controversial films of this century, The Interview (2014). Rogen and Goldberg developed the idea in the 2000s with Kim Jong-il as the original assassination target but, after Jong-il’s death in 2011, they re-worked the script with Kim Jong-un as North Korea’s new leader. 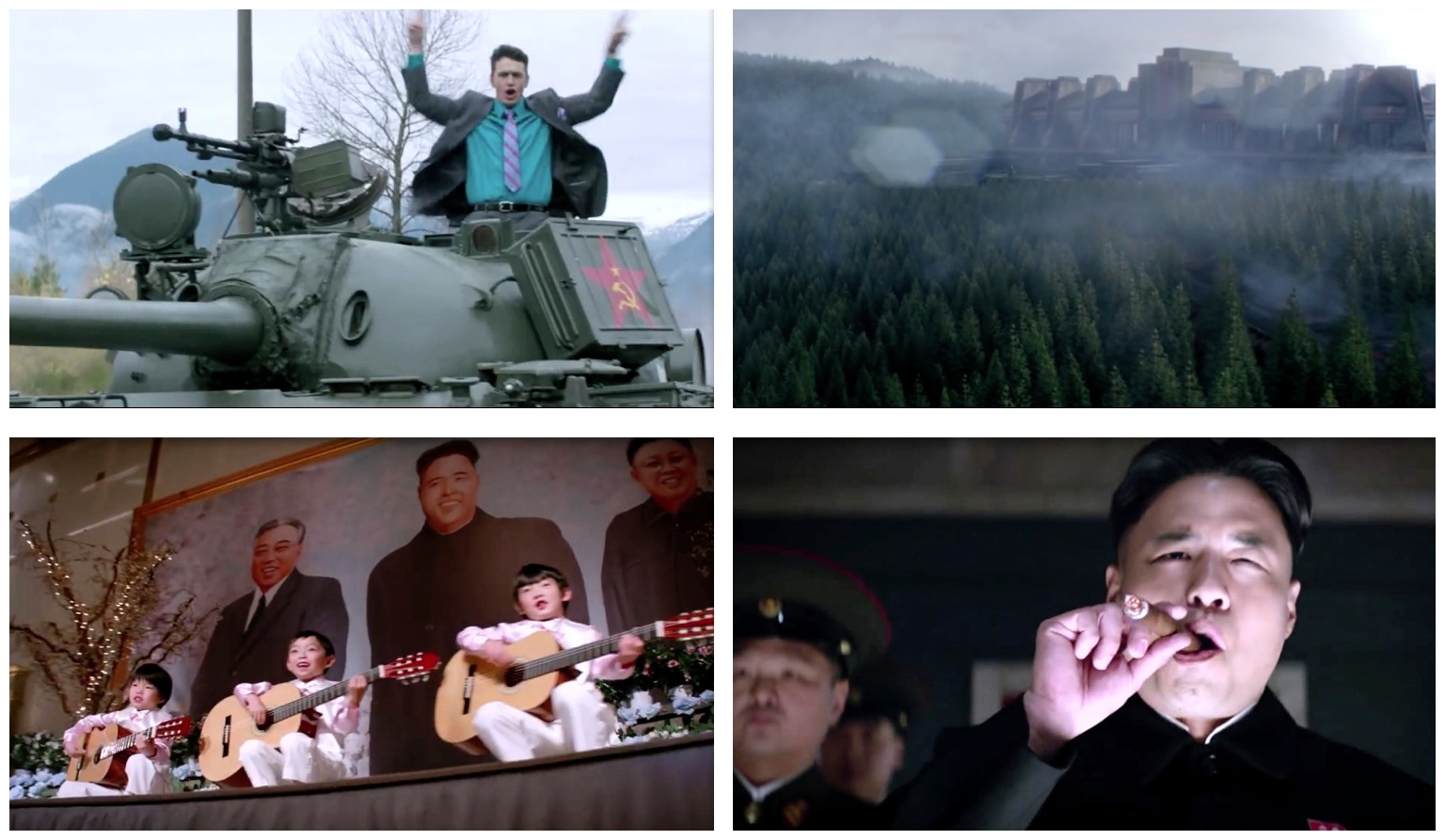 The film was given the go-ahead mid-2013 and, a year later, the North Korean government threatened action against the United States if the film was released: “Making and releasing a film on a plot to hurt our top-level leadership is the most blatant act of terrorism and war and will absolutely not be tolerated.” The fiasco scared 20th Century Fox so much they shelved the film Pyongyang, which was to be directed by Gore Verbinski starring Steve Carell. Sony Pictures changed the release date of The Interview from October to December and re-edited the film to make it more acceptable but, in November, Sony’s computers were hacked by a North Korean group called Guardians Of Peace. Confidential corporate information and several unreleased complete movies were posted for public consumption, and the FBI announced it had credible evidence that the hack was orchestrated by North Korea in retaliation for the film’s storyline, a claim that was quickly denied by the North Korean government. 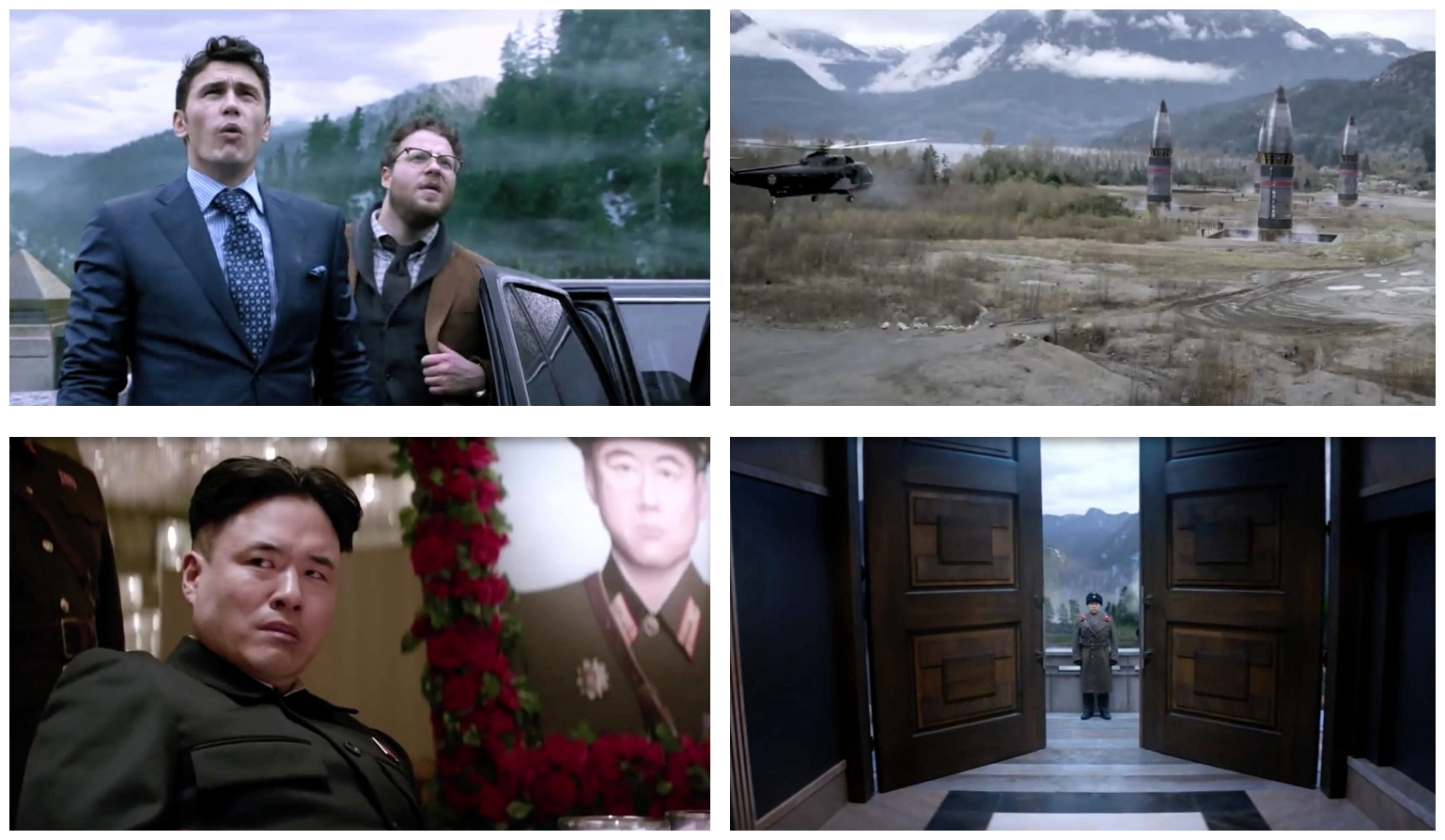 The group also threatened to attack cinemas that showed the film, so Sony decided to release it online first on the 24th of December 2014 (with full support from celebrities like George Clooney, Sean Penn, Michael Moore and even President Barack Obama) then screen it at selected cinemas the next day, as planned, threats or no threats. The Interview depicts Rogen’s and Franco’s ‘bro-mance’ in its most crystalised feature form so far – you simply can’t fake rapport like this. Dave Skylark (James Franco) is the anchor of a late-night talk show called Skylark Tonight, and his show’s producer is Aaron Rapaport (Seth Rogen). Like most other late-night talk shows, Skylark Tonight focuses on celebrities, Hollywood gossip and silly comedy sketches, and is hugely successful. Soon after reaching episode one thousand – and celebrating the milestone with lots of sex, drugs and rock’n’roll – Aaron and Dave receive correspondence from a North Korean propagandist (Diane Bang) informing them that North Korean leader Kim Jong-un (Randall Park gained fifteen pounds for the role) is a huge fan of the show. 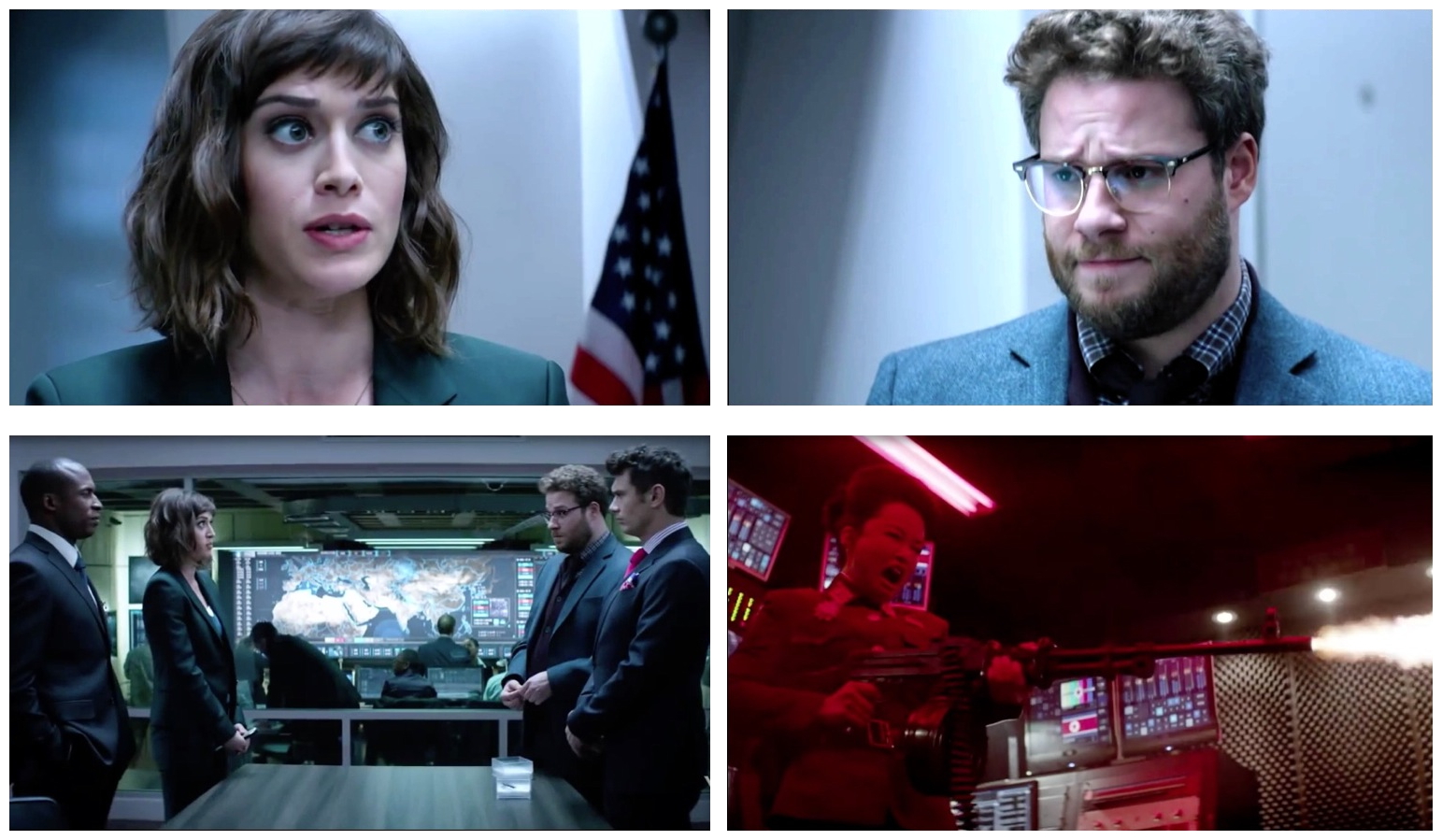 Aaron leaps at the opportunity to arrange an interview, which is accepted by the Korean dignitary. When the news of this unprecedented access spreads, the hapless pair are soon contacted by CIA agent Lacey (Lizzy Caplan) who convinces them that they’re in the perfect position to assassinate Kim Jong-un, putting years of conflict to bed and potentially saving much political and humanitarian grief in the future. The boys agree to the mission and are given strips of paper coated in ricin (you might remember that particular poison from the TV show Breaking Bad) which, when carefully stuck to their palms, will transfer the toxin to the North Korean leader upon shaking his hand. But Dave – much like Dennis Rodman – decides that Kim is actually a super-misunderstood dude, and the two play basketball and hang out, while Aaron is left alone to run errands. Dave decides to sabotage the plan, to the chagrin of Aaron and agent Lacey, but has Dave really become hoodwinked by the wily Peerless Leader, Glorious General, Bright Sun of Juche and Saviour of the People? 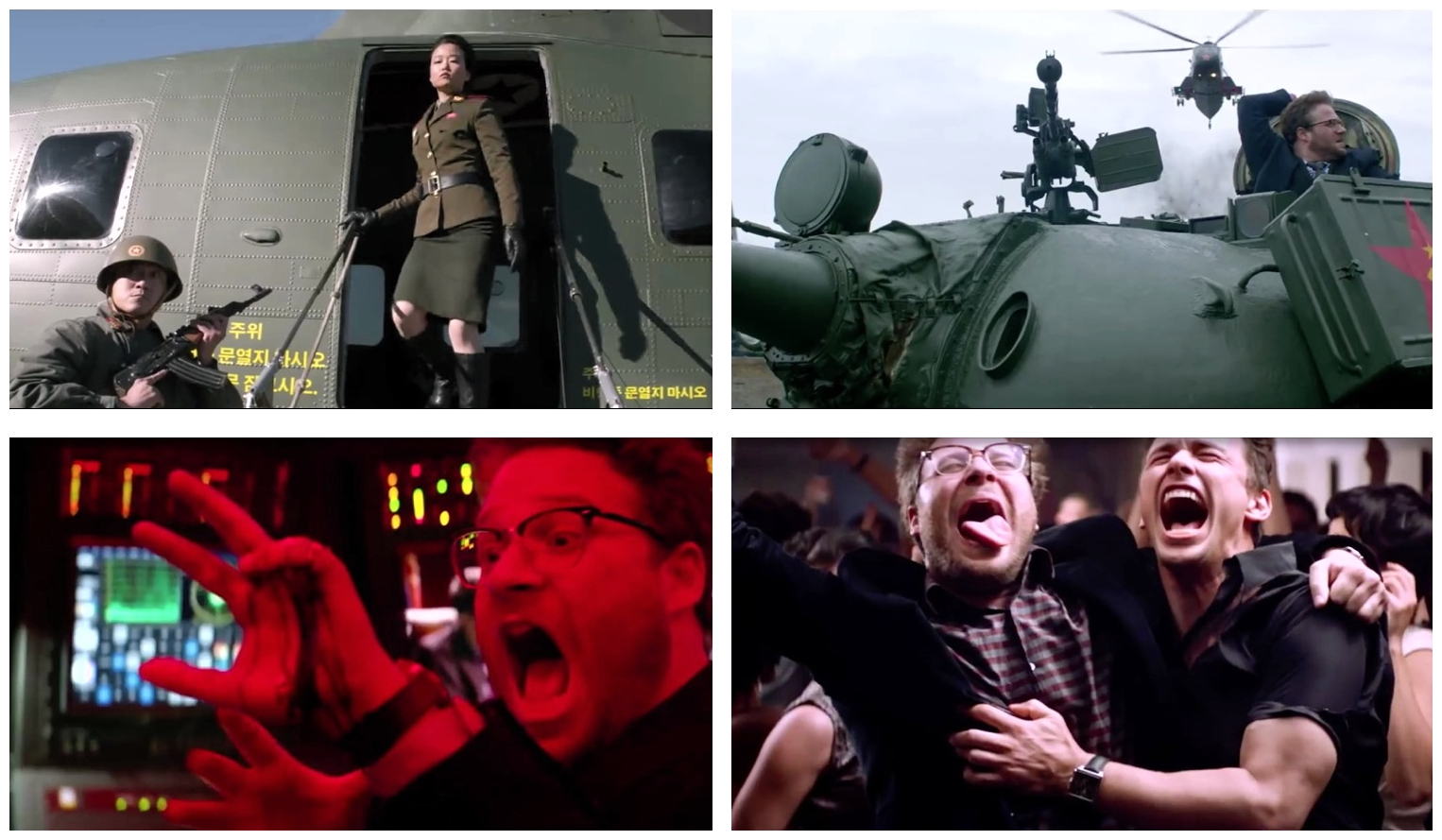 Almost completely overshadowed by the controversy surrounding its release and the infamous Sony hacks, The Interview is a highly entertaining albeit goofy gambol from a duo who know each other inside-out. Making more than US$40 million in digital rentals, it became Sony’s most successful digital release, and earned a further US$11 million at the international box office. Seth Rogen predicted that the film would eventually make its way to North Korea: “We were told one of the reasons they’re so against the movie, is that they’re afraid it’ll actually get into North Korea. They do have bootlegs and stuff, maybe the tapes will make their way to North Korea and cause a revolution.” As a matter of fact, it is illegal to watch this film (and most other foreign media) in North Korea, but a black market exists and many citizens have private access to DVD players and other media. A group of South Korean political activists intended to purchase a hundred thousand DVDs of the film with Korean subtitles and smuggle them over the border attached to helium balloons. 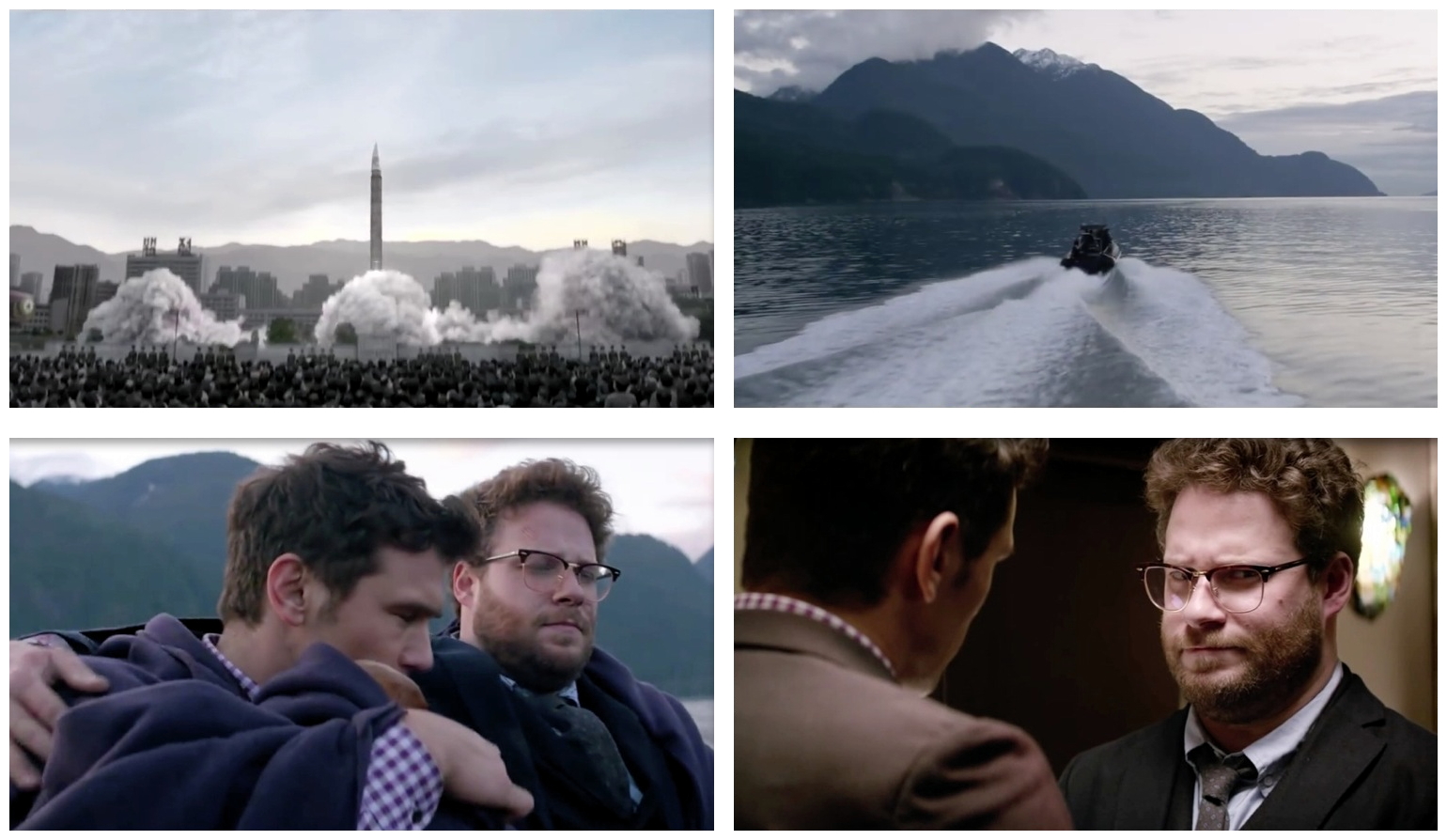 Many critics praised the lead performances, but reviews for its subject matter and humour were understandably mixed – the Korean-language tag-line on the poster acts as a warning: “Please Do Not Believe These Ignorant Dishonourable Americans!” The result is a work of ambitious comedy by one of the smartest comedic teams of this century and, whether you wipe the hacktivist embroilment aside or keep it with you as a reminder of the film’s contemporary effect, it should be enjoyed by many. Funny, rude, clever and idiotic, often at the same time. Before you have time to digest that crummy nugget of knowledge from a very special source, I’ll quickly say my goodbyes and disappear into the night, but not before inviting you to return next week to sacrifice more minutes of your precious life to witness dark depravities never before realised (well, almost never) with…Horror News! Toodles! 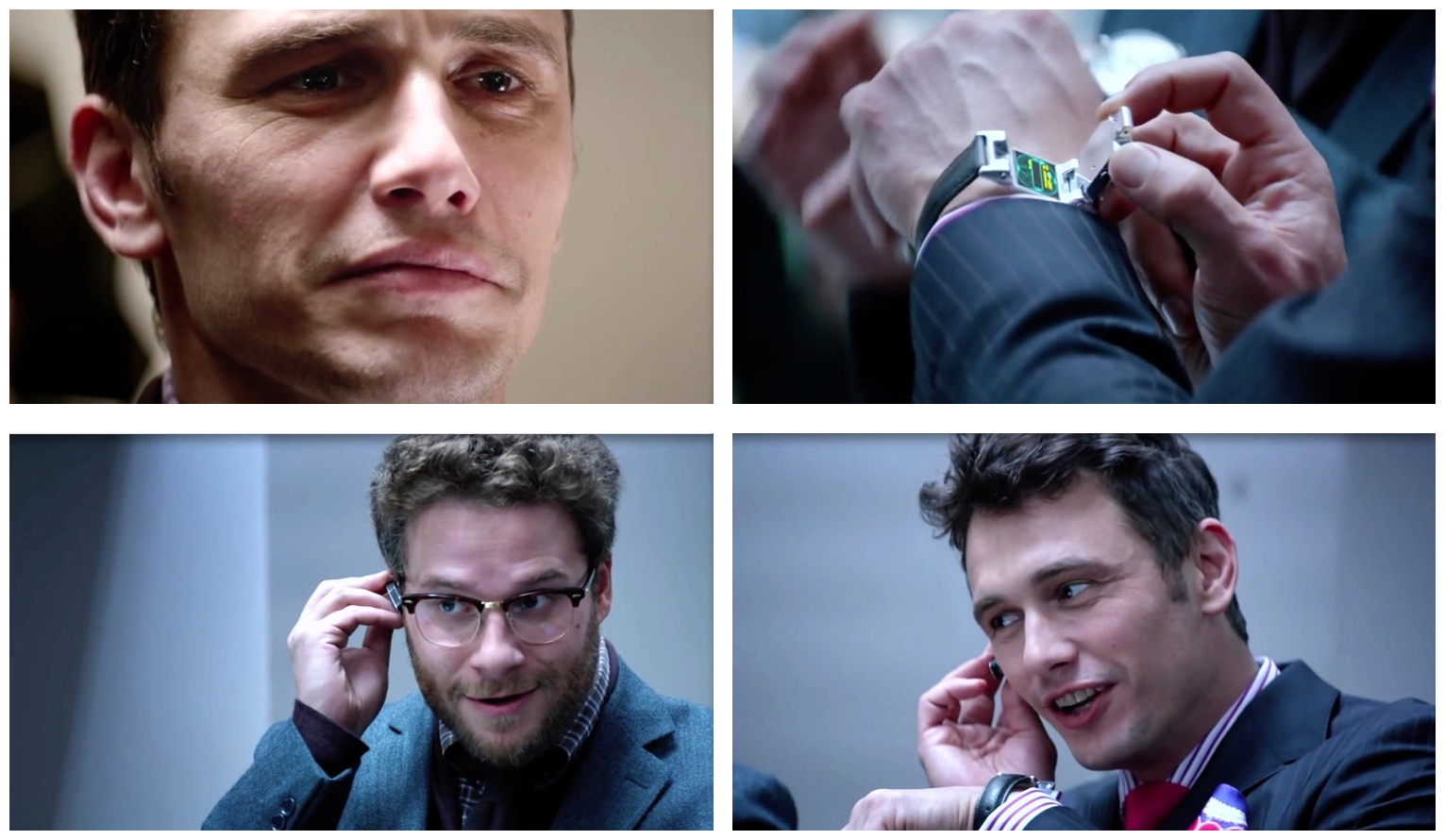