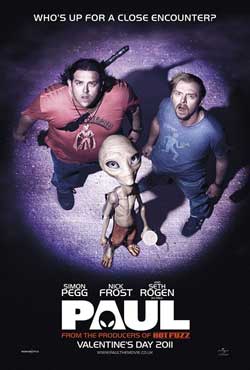 Two sci-fi geeks take a pilgrimage to America’s UFO heartland. While there, they accidentally meet an alien who brings them on an insane road trip that alters their universe forever. For the past 60 years, an alien named Paul (voiced by Seth Rogen) has been hanging out at a top-secret military base. When he discovers he’s been taken prisoner, the space-traveling smart ass decides to escape the compound and hop on the first vehicle out of town-a rented RV containing Earthlings Graeme Willy (Pegg) and Clive Gollings (Frost). Chased by federal agents and the fanatical father of a young woman that they accidentally kidnap, Graeme and Clive hatch a fumbling escape plan to return Paul to his mother ship. And as two nerds struggle to help, one little green man might just take his fellow outcasts from misfits to intergalactic heroes.

The Black Saint got up really early today to give all of you the lowdown on a new film called “Paul”. Let me make something abundantly clear, The Black Saint does not enjoy getting up early. For anybody or anyone…especially his loyal acolytes. Nothing against my loyal ones but they know I don’t like to get up early. I don’t eat breakfast, not crazy bout’ lunch either. I enjoy my slumber immensely but I went & watched this for all of you because I care. And you know what? I’m glad I did because “Paul” is the best film I’ve seen so far this year.

“Paul” is about two lifelong friends from England who happen to be geeks as well. They’re visiting America for the first time to attend Comicon & travel across country in a rented RV to visit certain spots where there have been alien sightings. They plan to end their trek at the famed Area 51, where the U.S. supposedly has an actual alien that was captured back in the 40’s. Amazingly enough, the alien decides to make a break for it just as our two protagonists, Willy (Pegg) & Clive (Frost) are driving by. The alien escapes in a car that he can’t drive & promptly gets into an accident in front of the RV & when they stop to investigate, they can find no one in the car. But Paul (Voiced by Seth Rogen) is standing there on the side unharmed & promptly greets them. At this point Clive passes out & wets his pants while Graeme is left speechless. Paul convinces him to let him in the RV so he can tell them his tale. You see, Paul has been experimented on for the last 6 decades or so & has overheard that he is no longer useful to the government, so they were planning to remove his (Large) brain. All he wants to do is to go home (remind you of anything)? And the only way to do that is to travel back to the spot where he crashed decades earlier. He has already sent a signal to his people & they will be there waiting for them. But he needs their help to get to that spot.

Once the two of them get used to the fact that they have an actual alien riding with them & they hear his story, they agree to help him. But they are being pursued by three literal “Men In Black”. Two who aren’t too swift (Bill Hader & Joe LeTrugio) & one who is VERY sharp indeed (Jason Bateman). They are all taking orders from “The Big Guy” who is supposed to be a big secret but as soon as you hear her voice you know it’s Sigourney Weaver. Paul & his new friends stop off at a RV camp for the night where they meet Ruth Buggs (Kristin Wiig) & her dad Moses (John Lynch) who are religious fanatics. Ruth inadvertantly sees Paul that night & the next morning when she asks about him, he reveals himself to her & they have to kidnap her lest she spill the beans. Wigg is fantastic in the film, making me laugh continuously as she learns to curse with Paul as her teacher (She’s led a sheltered life all of these years). There is also a surprisingly deep subplot in the film regarding God & Darwin’s theory of evolution. She refuses to believe that there is life on other planets because the bible doesn’t say that & Paul tries his hardest to convince her otherwise. It gets pretty deep on occasion & is actually a welcome respite from the comedy every so often.

Now in addition to the men in black following them, so is Moses. So a lot of the film is spent in the RV with our heroes being chased by those who would harm them. All the while, Paul seems to be helping his saviors learn how to be a little more human. He certainly isn’t your usual cinematic alien. He smokes weed, knows a lot of dirty jokes. Has a (apparently) large penis & can turn himself invisible (by holding his breath). He can also transfer all of his thoughts & knowledge into someone by touching their heads & concentrating (Much like Spock on Star Trek). This is how he convinces Ruth of life on other planets. He also has the ability to revive the dead although this taxes him greatly. It also plays a large role at the end of the film.

“Paul” is so full of in jokes that it has to be seen more than once to get them all but I can say that there are bits of “Close Encounters”, E.T., “Raiders Of The Lost Ark”, “Star Trek”, “Star Wars”, “The Wizard Of Oz” & even a long forgotten Nick Nolte film which will remain unnamed here in this review but is a great line when uttered, you’ll have to trust me on that one. It even mentions “Mac & Me” a film from the 80’s that might jog some memories in a couple of viewers. It has so many references to films both uttered & seen in the background that a lot of the time I was watching the background to hopefully see something I might have missed. I’m sure I did miss a couple, that’s why I’ll be back this weekend to see it again. “Paul” is wonderfully acted as well. Pegg & Frost go together like Ham & Eggs. First “Spaced” then “Shaun Of The Dead”, “Hot Fuzz” & now this? These guys need to make a film every year (From Dusk Till Shaun anyone)??

Edgar Wright didn’t direct them this time out though, Greg “Superbad” Mottola did & does a bang up job here. The film is never boring, endlessly fascinating & hysterically funny as well. All of the actors bring their “A” game to the proceedings & the character of “Paul” is so well animated he might as well have been an actor in a suit. Seth Rogen is a scream in the role as well. I wonder how much of his dialogue was ad libbed? A lot of it sounds like it was off the cuff. No matter, it all plays wonderfully. Like I said in the beginning of this review “Paul” is the best movie I’ve seen this year so far & if half of the summer movie onslaught we’re all waiting for is as good as “Paul” it’s going to be a great summer for movie fans all over.

“Paul” is the first film this year to get a five shroud rating from The Black Saint. I f*cking loved every second of it & I’m pretty sure you guys will as well. I command all of my acolytes to see it immediately!! And all the rest of you stragglers as well. If you’re a fan of genre movies in general, you must see “Paul”. It is a marvelous 100 minutes or so of entertainment. You will leave the theater with a smile on your face, I guarantee it. And with that, The Black Saint has a premiere to go to tonight. Stevan Mena’s “Bereavement” opened officially today in NYC & I’m off to see the best film I saw last year again this year. If you’re in the NYC area, check your local listings & go see a great horror movie. Lord knows there haven’t been too many of those this year so far. I leave you with my usual farewell, Say your prayers…I’m always listening. I’M ALWAYS LISTENING PEOPLE!!

And by the way, if you haven’t done so already, make a donation to the Red Cross to help our fellow horror lovers (& everybody else) in Tsunami ravaged Japan. They need all the help they can get from all of us. I even sent some money & The Black Saint is the tightest of tightwads!! Give whatever you can, you never know when you might be the one in need. Thanks.