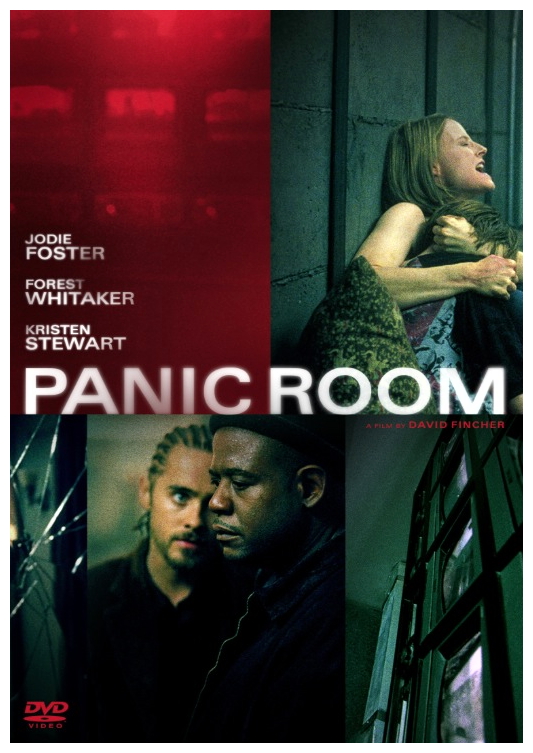 “Meg Altman – emotionally estranged from her cheating ex-husband, pharmaceutical magnate Stephen Altman – and their street-wise pre-teen daughter Sarah Altman are spending their first night in their just purchased converted brownstone in the Upper West Side of Manhattan. The conversions, which include a functioning elevator and secure panic room, were made by the now deceased former owner, a wealthy recluse whose family is now fighting over the whereabouts of his vast estate. What Meg does not know is that part of that estate – supposedly $3 million – is hidden in a safe in the floor of the panic room, something that Burnham, Junior and Raoul know. Junior is the grandson of the previous owner, Burnham works for the security company that monitors the security system for the brownstone including its panic room, and Raoul is Junior’s gun-toting hired hand. The three plan on retrieving the money. Believing the brownstone still empty, the three criminals break into the brownstone and quickly find that it is not as empty as they believed. When all five realise there are others unexpected in the house, Meg and Sarah are able to make it into the panic room, but one that as of yet has no functioning telephone, which Burnham knows. Burnham also knows there is no way for him or his partners to get into the panic room. The five are at a standoff as Meg and Sarah will not leave the panic room, while the three criminals won’t leave until they get the money. As Meg and Sarah try to figure out how to get a message to the outside world – specifically either to the police or Stephen – they are working against time as Sarah is a diabetic who does not have access to her insulin. And the three criminals may have other foes besides the Altmans, the three who are differing personalities and thus have different motivations in stealing the money. Each may have different thoughts on how far they should go to get it.” (courtesy IMDB)

After working in special effects for George Lucas‘s Industrial Light & Magic, David Fincher won acclaim with a gruesome cancer awareness ad featuring a baby smoking a cigarette while still in the womb. He first made a name for himself in music videos, directing iconic works for Billy Idol (Cradle Of Love), Michael Jackson (Who Is It?), George Michael (Freedom ’90), The Rolling Stones (Love Is Strong) and Madonna (Express Yourself, Oh Father, Vogue). These videos show Fincher’s influential style, characteristically shot in dark saturated tones, using low-key lighting in order to create a high contrast between light and dark that accentuates certain aspects of a scene or shrouds the image in mystery. The use of low-focus wide-angle photography leaves many of his images out of focus, and he has been known to experiment with subliminal one-frame images flashing on screen. Fincher has combined this style with a meticulous attention to detail, a passion he shares with his most memorable characters. 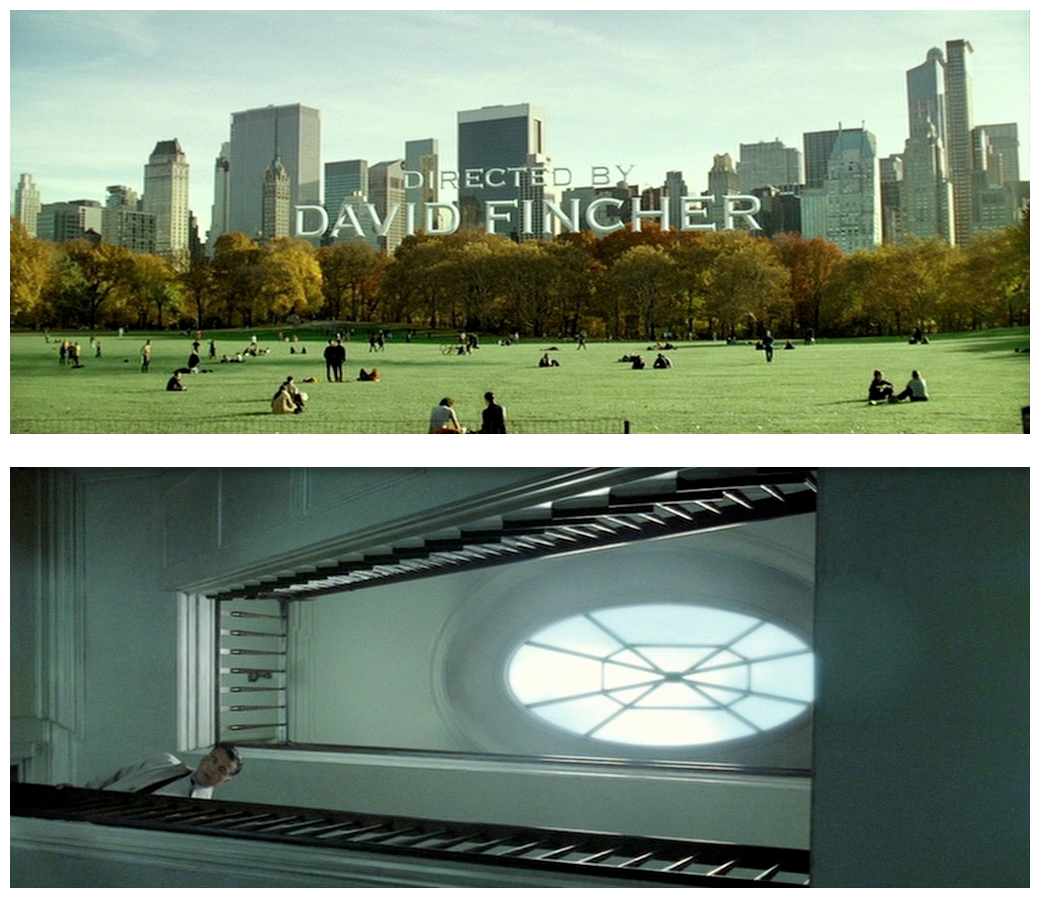 Nominated for Best Director Oscar for The Curious Case Of Benjamin Button (2008) and The Social Network (2010), and co-creator of the television series House Of Cards (2013) and Mindhunter (2017), he is also known for the thrillers Seven (1995), The Game (1997), Fight Club (1999), Zodiac (2007), The Girl With The Dragon Tattoo (2011) and Gone Girl (2014). Panic Room (2002), starring Jodie Foster and Kristen Stewart, concerns a newly divorced mother and her daughter who find themselves in peril from a trio of thieves when they move into a multi-storey New York apartment. On their first night in the house however (cue crack of thunder), a trio of bungling thieves break in seeking money believed to be hidden inside the house’s ‘panic room’ – a customised high-tech concrete-walled bunker with a separate phone line and steel-reinforced doors designed to keep the occupants safe from intruders. For mother Meg (Jodie Foster) and daughter Sarah (Kristen Stewart) the room offers safety but, fortunately for us (and scriptwriter David Koepp, paid a record-breaking US$4 million), not all the room’s safety features are fully functioning, otherwise there would be zero suspense – Foster and her daughter would simply sit the film out playing Monopoly or Twister until the cops arrived. 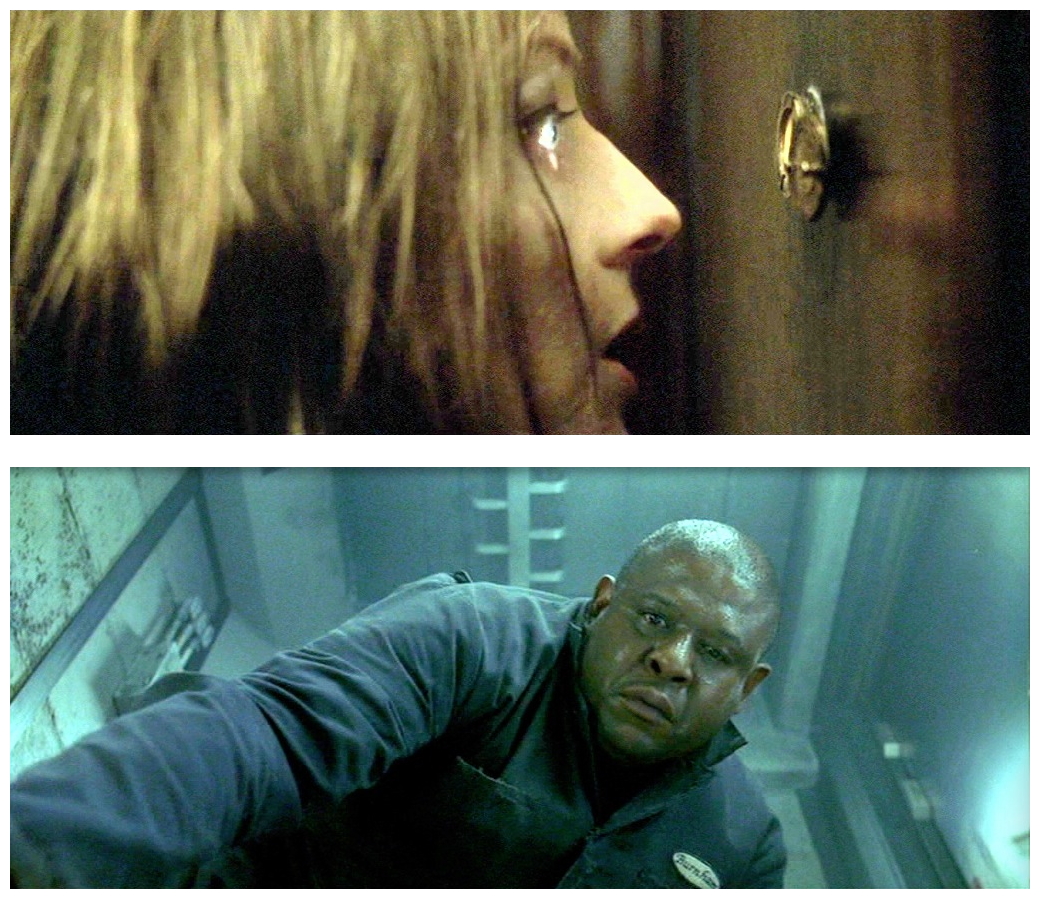 To avoid that dull eventuality, Koepp does everything in his power to keep Foster and company out of the room as much as possible, and the lack of motivation from virtually all of the film’s characters proves irritating in the extreme, but no one could accuse the filmmakers of not pulling out all the stops. Fincher, his cinematographer Conrad W. Hall and a team of effects artists threw themselves headfirst into this project as if their lives depended on it. Surprisingly, somebody believed Koepp’s script warranted this kind of Rolls-Royce treatment, but the reasons why remain a mystery. Though entertaining enough, closer examination reveals Panic Room as a disappointingly straightforward forgettable thriller that ultimately proves as empty as its setting. Despite Fincher’s exhausting enthusiasm to lift this Hitchcockian wannabe out of the ordinary, Koepp’s script keeps shooting him (and his predictably cast players) in the foot. 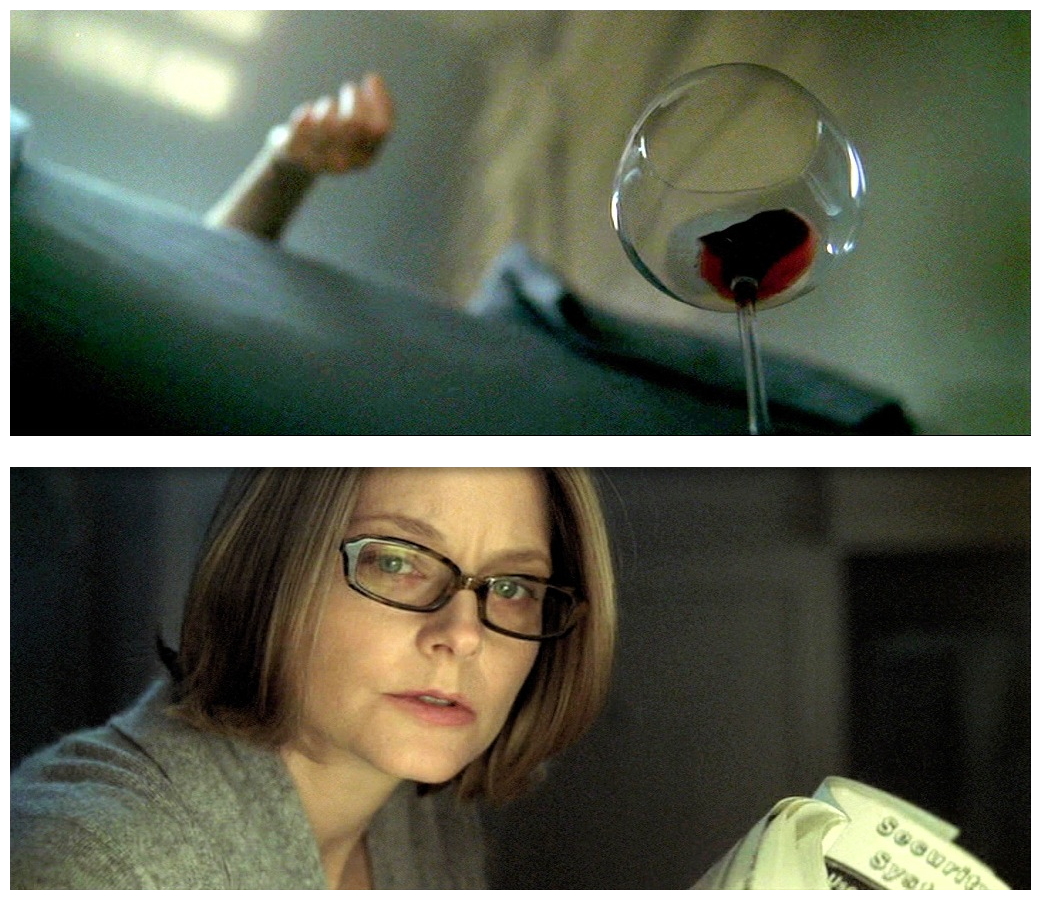 The shifts between dumb humour and acts of extreme violence are rather clumsy and tend to jar more than thrill, and the script manipulates in ways that induces groans rather than gasps. Foster, whose eyes have always had a nervous caught-in-headlights quality, does her best and makes an adequately sympathetic lead. Nicole Kidman was originally cast in the role of Meg but, only eighteen days into filming, she had to leave due to a recurring knee injury suffered during the filming of Moulin Rouge (2001). Fincher suggested that the studio close the production and collect the insurance, but the studio decided to go on when Jodie Foster was offered the role, and was given only nine days to prepare for the role (Kidman does appear in the film as the voice of Meg’s husband’s girlfriend). Fincher’s constant deployment of a high-angled camera in the panic room, however, seems gratuitously geared to exploit the tank-topped Foster’s fuller-than-normal physique (she was pregnant throughout the shoot). 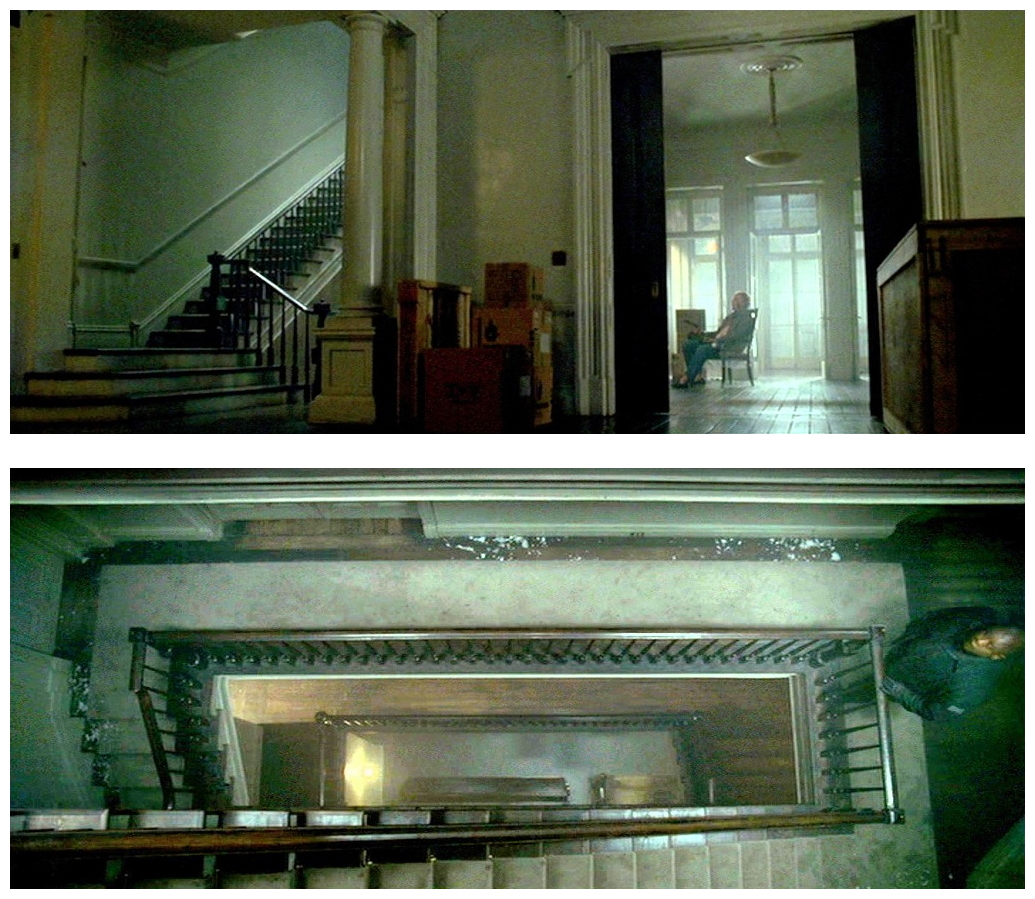 Hayden Panettiere was originally cast as daughter Sarah, but Fincher found her irritating and replaced her with Kristen Stewart, who also does well with what she’s given. Stewart posed a different irritant for Fincher, by growing more than three inches (about eight centimetres) during filming (120 days, the longest shoot in Foster’s career). Stewart was shorter than Foster when production started and towered over her by the time her final shots were done. The bungling trio of villains are poorly developed, with Jared Leto particularly grating as the team’s moronic self-appointed leader (Leto did all his own stunts, including being set on fire). His dealings with the psychotic Raoul (Dwight Yoakam is almost unrecognisable) are played for laughs and seriously undermine the trio’s threat. Especially when you’ve also got cuddly Forest Whitaker along as a security expert with a conscience, but stupid enough to wear his work overalls with his name-tag stitched on the front. 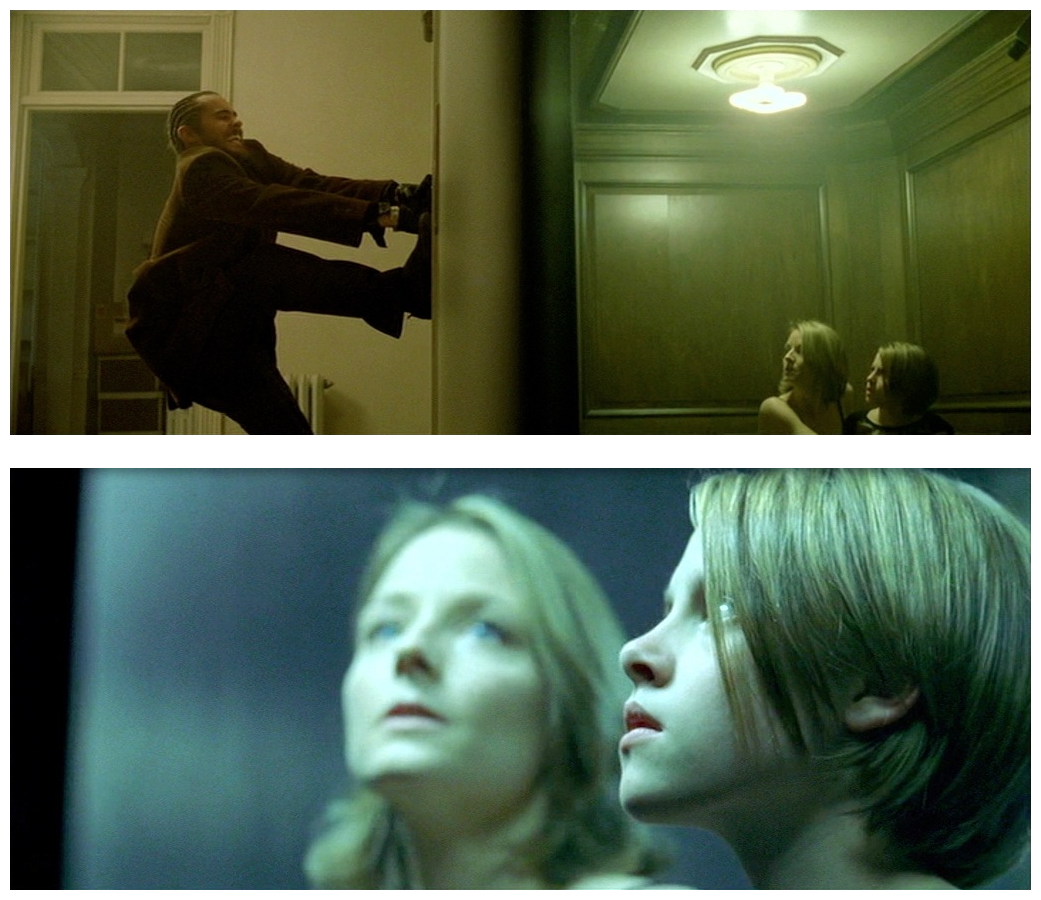 Whitaker has played this conscience-stricken character so many times now it’s obvious from the start how the film will resolve itself, although Koepp’s decision to replicate the finale of Stanley Kubrick‘s The Killing (1956) came as a surprise. But it’s not all bad news though, being a Fincher film it contains probably the best opening credits of the year. Inspired by the opening of North By Northwest (1959), this genuinely classy sequence featuring various buildings adorned with the towering letters that spell out the title, cast and crew has an astonishing 3-D quality and took a full year to complete. Accompanied by Howard Shore‘s throbbing Bernard Herrmann-like score, it’s a sequence that would have thrilled Saul Bass himself – an undeniably nice piece of work but promising far more than the film ever delivers. As expected, Panic Room is full of the dizzying, sometimes astonishing camera-batics that we’ve come to expect from Fincher, shots that defy gravity (and sometimes logic) but very impressive all the same. 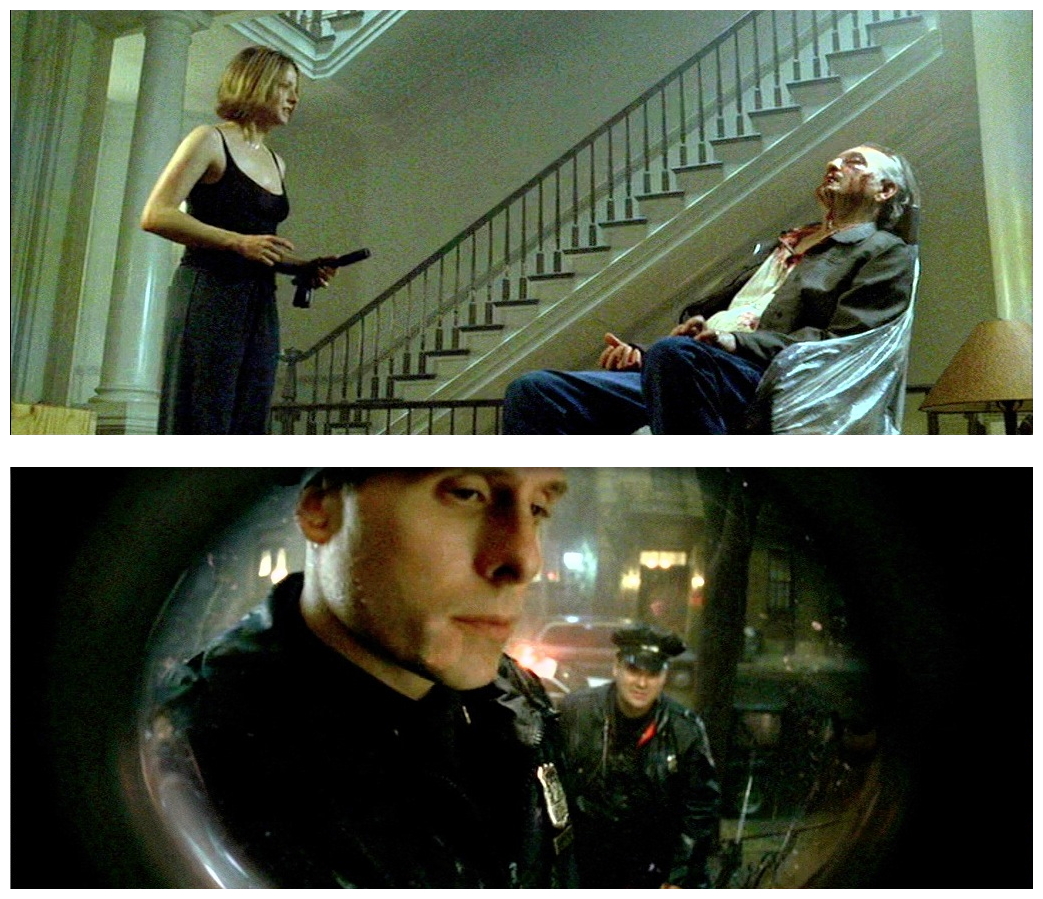 As Fincher’s hyperactive lens forever swoops down stairwells, races through jug handles or whooshes through pipes, you’ll find yourself hoping that, when Foster sits on the toilet, the camera doesn’t rush through the S-bend to meet her private parts. Technically, Panic Room is state-of-the-art and is best enjoyed on that level. While one can admire its virtuosity, the cliches and clunky attempts at humour only depress. This is a Fincher film after all but, since Seven (1995), we’ve come to expect a lot more from this particular filmmaker, and I get the distinct impression that Fincher considered Panic Room as a bit of a lark between more serious projects. I shall leave you with this deep thought in mind, and ask you to join me again next week when I’ll have another opportunity to inflict upon you the tortures of the damned from that dank bottomless pit formerly known as Hollywoodland for…Horror News! Toodles! 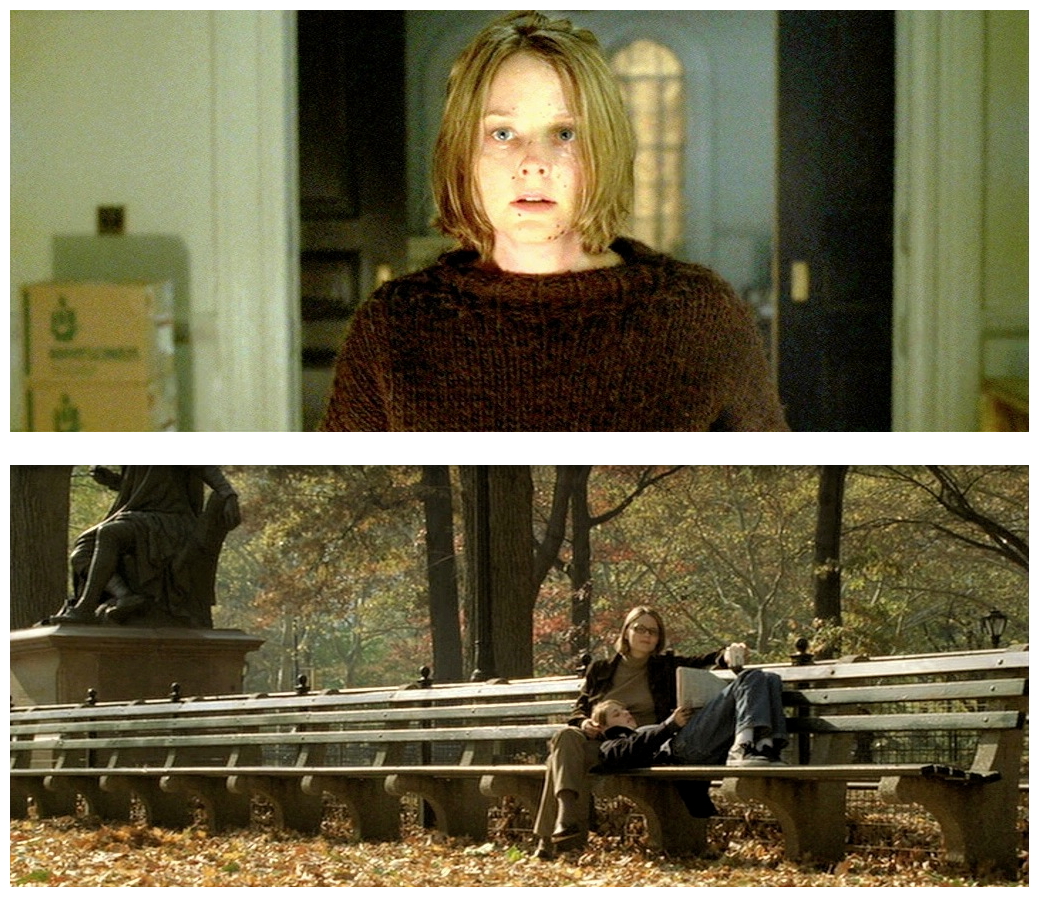