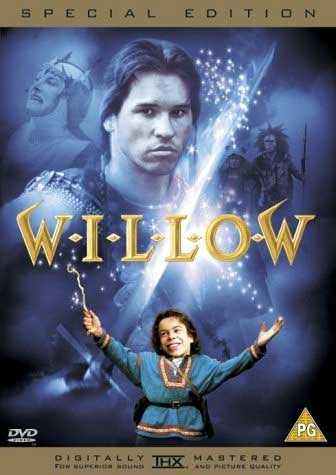 SYNOPSIS:
“In the dungeons of the castle of the evil sorceress Queen Bavmorda, a prisoner gives birth to a child who, according to an ancient prophecy, will put an end to the reign of the Queen. A midwife saves the child from the wrath of Bavmorda, but is forced to throw her cradle in a river when reached by the Hounds of the Queen. The river brings the child near a village of Nelwyns, and little Willow finds and adopts her. When the Hounds reach the village, Willow begins a difficult journey to bring the baby back to her people and to fulfill the prophecy.” (courtesy IMDB)

REVIEW:
Written and produced by George Lucas! Midgets! Crazy witches! Gorgeous New Zealand locales! Big Industrial Light & Magic special effects! Pre-Batman Val Kilmer (when he actually seemed interested in acting)! And at the helm, nice guy Ron Howard, a long way from his meagre beginnings as director of modestly budgeted fare for Roger Corman. It’s just so crazy it might just work! Or not, as the case may be.

As a film student at the University of Southern California, George Lucas was exposed to Frank Herbert’s Dune trilogy and J.R.R. Tolkien’s The Lord Of The Rings trilogy (as were most students in the late sixties/early seventies). It is these books in particular that form the basis of much of George’s fantasy and science fiction. George conceived the idea for Willow (1988) – originally titled Munchkins – way back in 1972, after he discovered that acquiring the film rights to The Lord Of The Rings was nigh on impossible for a young filmmaker like himself. Much later, during the production of Star Wars VI: Return Of The Jedi (1983), Lucas approached Warwick Davis, who was portraying Wicket the Ewok, about playing Willow Ufgood. Five years passed before he was actually cast in the role. George told me “I thought it would be great to use a little person in a lead role. A lot of my movies are about a little guy against the system, and this was just a more literal interpretation of that idea.”

Willow, played by Warwick Davis, is a farmer living in a picturesque community of little people known as the Nelwyns. One day he finds he’s inherited a baby that arrives on his doorstep, Moses-style. But as it turns out, the baby sports the dreaded birthmark which evil Queen Bavmorda (Jean Marsh) fears most – a mark linked to a prophecy foreshadowing her demise. Following a town meeting, the Nelwyn community decide that it’s up to Willow to undertake the perilous quest of delivering the baby to the castle of good Tir Asleen where the little tyke can fulfill her rightful destiny. It’s on this quest that Willow encounters Val Kilmer and his future real-life missus Joanne Whalley, trolls, brownies, and a two-headed dragon that make up much of the film’s long running time which, to be fair, is to be expected nowadays. 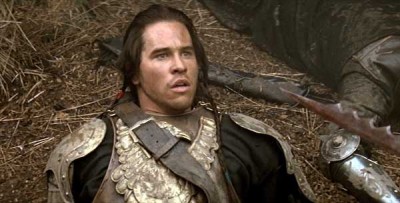 While the production is handsomely mounted, the slightness and episodic nature of the story, the lumpy pacing, dated special effects (though the go-motion two-headed dragon known as an Ebersisk is actually quite good, named after film critics Siskel and Ebert), and the muted cinematography from the usually reliable Adrian Biddle fails to really generate much excitement. But it’s amiable enough and of course, like all fantasy films, Willow has its rabid supporters who won’t hear a word against it. But then, so does Howard The Duck (1986).

To be completely straightforward, I found the special features on the DVD far more interesting. The commentary from the film’s pint-sized star Warwick Davis might sound like a chore, but it actually turns out to be one of the best I’ve heard in a while. The erudite Mr. Davis has obviously come to the microphone very prepared and provides plenty of amusing and interesting anecdotes. The Making Of Willow featurette is a fairly good example of those extended promos that you find televised nowadays in the wee hours of the morning – you know the sort, rapid-paced clips of the film punctuated with grabs of the actors and producers telling us how much they loved working with one another (yep, even Mister Kilmer) with a narration that suggests they were pitching the film to eight-year-olds.

As if to make up for such a mediocre Making Of featurette, another featurette entitled From Morf To Morphing is a fascinating look at the groundbreaking techniques designed by effects artist Dennis Muren, showing one of the creature transformations. Apparently, Ron Howard didn’t want to resort to using a bunch of dissolves – an effect that had been in use since Frederic March turned into Mister Hyde in 1931. Muren’s early morphing breakthrough might seem laughably primitive, but it’s here that the seeds were sown for the CGI wonders crammed into every other film these days. What’s mind-boggling is that this was only five short years before Jurassic Park (1993). And it’s on that note I’ll wrap-up this week’s burnt offering, and respectfully request your presence next week, when your leg will be crudely humped by another cinematic dog from Hollywood for…Horror News! Toodles! 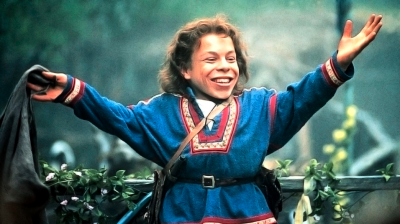