THE RED CARPET FOR HOLLYWOOD ICONS THIS OCTOBER

Additionally, the convention will celebrate the Hollywood classic, Sixteen Candles, with the reunion of

ORLANDO – Spooky Empire, who hosts one of the most coveted and recognizable thriller conventions in the nation, announces the reunion of the Hollywood classic, Sixteen Candles, with the attendance of Molly Ringwald, John & Joan Cusack and Anthony Michael Hall on October 27 – 29, 2017 at The Hyatt Regency Orlando. The convention will also celebrate the 30th anniversary of iconic American horror comedy The Lost Boys with the attendance of Billy Wirth, Jamison Newlander and G Tom Mac. The convention has also added an array of new activities for guests to enjoy including a Charity Casino Night, an expanded Kid’s Zone, Special FX Makeup classes, Literary Guests & Creators Track, Fast Pass photo-op option, and many more to be announced through October.

As a bonus to the Spooky Empire family, doors will open earlier on Friday, October 27 at 12 p.m. to begin the weekend-long festivities.

All advance tickets, now on sale, are discounted. Prices increase after October 8th and at the door. In advance, three-day passes are $60, one day passes on Friday and Sunday are $30, and one day passes on Saturday $35. Limited VIP Packages are available for $225 and include early entry to all three days, raffles, T-shirts, autograph line fast-pass, exclusive VIP party access on Saturday night with guest celebrities in attendance. Tickets for children under ten years old are free.

Rooms are available at The Hyatt Regency Orlando for a discounted price of $119 per night. Rooms can be reserved online or by calling 1-407-284-1234. Mention ‘Spooky Empire’ for special rate.

For more information regarding the schedule and to purchase tickets, visit www.spookyempire.com.
Stay tuned as more activities, special guests, celebrities and more will be announced in the coming weeks. 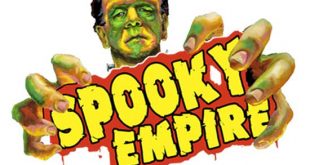