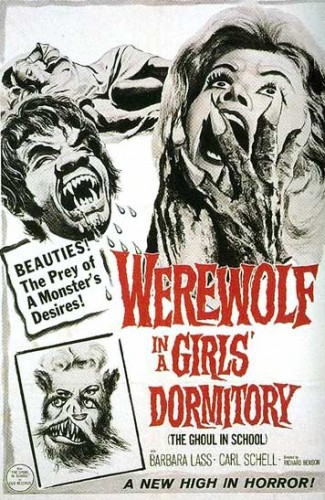 “The new science teacher Doctor Julian Olcott with a mysterious past arrives in an institutional boarding school for troublemaker girls. Along the night, the intern Mary Smith, who is blackmailing another teacher – Sir Alfred Whiteman – with some love letters, is slaughtered by a werewolf. The detective in charge of the investigation attributes the crime to a wolf, while her mate Priscilla believes she was killed by Sir Alfred. On the next days, other deaths happen in the school, reducing the list of suspects.” (courtesy IMDB)

I have a confession to make – I love old movie trailers. I’m not talking about the thirties Universal movies here, I mean the real stuff, authentic exploitation – the science fiction horrors of the fifties and sixties. The powers-that-be that allowed such films to flourish developed an amusing, but effective system. First of all, the producers would first come up with a marketable title. Then the poster art would be created around said title. Next the poster art would be run by film distributors. Only if they showed interest in booking such a film would the actual movie be written and produced, resulting in films like The Beast With A Million Eyes (1955) and I Married A Monster From Outer Space (1958). Of course, such titles are still being produced, but now it’s for camp value, like Snakes On A Plane (2006), Kids Go Into The Woods, Kids Get Dead (2009), or The Lights Have Gone Out, Let’s Split Up. In our enlightened era such titles are uttered with tongue firmly implanted in-cheek. Not so in the golden era, back when the films tended to be a straightforward presentation of what the title promised, like I Was A Teenage Werewolf (1957) and Attack Of The Fifty-Foot Woman (1958).

Director Paolo Heusch was a rather ordinary filmmaker of rather ordinary films, such as A Violent Life (1962), about Italian juvenile delinquents, and What Ever Happened to Baby Toto? (1964) – I’ll let you work out what that one is about. His only other genre effort was the disaster movie The Day the Sky Exploded (1958) in which the sun…catches on fire – they didn’t really think it through, did they?

Doctor Alcott is played by Carl Schell. You may not tell from his performance tonight, but he comes from awfully good stock, being the lesser-known brother of award-winning actors Maximillian Schell and Maria Schell, and cousin to beautiful Catherine Schell from the Gerry Anderson series Space: 1999 – she played Maya, the shape-changing alien, and was the first woman on television to make sideburns sexy. Apart from minor roles in dozens of American television shows, Carl Schell’s most important role was probably as the Red Baron in The Blue Max (1966), opposite a young George Peppard.

The most familiar face among the cast might belong to the school’s director, Mister Swift, played by Curt Lowens. He’s appeared in more than a hundred American television shows, from Combat in 1966 to Babylon Five in 1994 to Cold Case just a few years ago. Yes, folks, this one’s still alive! He can also be spotted in films like The Mephisto Waltz (1971), The Hindenburg (1975), Firefox (1982), and most recently Angels And Demons (2009) with Tom Hanks.

Leonor is played by Maureen O’Connor, the biggest role of her blissfully short, but nevertheless unusual film career. About this time, in 1961, she appeared in only two other films, both credited as ‘girl’, after which she vanished from the silver screen. Two decades later, in 1983, she popped-up seemingly from no-where to play detective Matt Houston‘s secretary in the television show of the same name, a Magnum PI wannabe, followed by small roles in Manimal and The Man Who Loved Women (1977) with Burt Reynolds – maybe she had a thing for facial hair? Anyway, Maureen finally retired after a film career that spanned twenty years – and only a half-a-dozen minor roles.

Then, of course, there’s the beautiful Barbara Lass, here playing Priscilla. Barbara was only twenty years old at the time, and just looks absolutely smashing. No matter how many beautiful women I see in movies, now and again one really catches my eye and then throws it back to me. Barbara is one. Her biggest brush with fame was her brief marriage to director Roman Polanski – maybe she was too old for him. Her only English-language film was the rather mediocre made-for-television movie Hauser’s Memory (1970), starring David McCallum and written by Curt Siodmak. Unfortunately, Barbara passed away in 1995 at the terribly young age of 55.

I have to admit, compared to many of the films I’ve presented, this one isn’t so bad. For instance, the film is only eighty-three minutes long, and the filmmakers put some work into it, supplying us with a large number of suspects and making sure that everybody is acting suspiciously at all times. The only practical way to figure out who the werewolf is, is by simply waiting until everyone but the villain has been killed off.

Werewolf In A Girls Dormitory provides us with six corpses, but I feel a little ripped-off that only one of them was the work of a werewolf. And what happened to that Ghoul In The School song they promised in the opening credits? Ripped-off again! It’s the 21st Century and I still don’t have my flying car! Can’t this movie deliver anything? Oh well, better luck next week, when I discuss another roadkill on the motorway of mediocrity for…Horror News! Toodles! 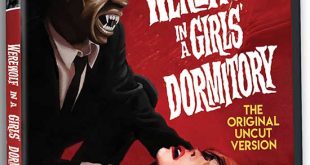