Film Review: Voyage To The Planet Of Prehistoric Women (1968) 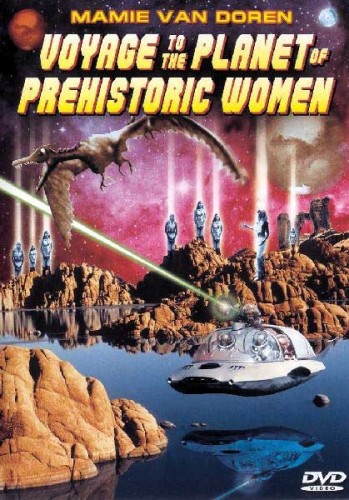 “In the distant future of 1998, six months after the collision of a meteor and subsequent explosion of a rocket sent to Venus, the team composed by the astronauts Kern and Sherman with the robot John is launched to explore Venus. They arrive in the Space Station Texas for refueling but they have problems while landing in Venus. Without communication, another rocket is launched with Commander Brendan Lockhart, Andre Ferneau and Hans Walter to rescue the first team and explore the planet. They use a vehicle to seek Kern and Sherman, but they are attacked by a flying reptile. They kill the animal without knowing that it is worshiped and considered the God Terah by Venusians women that use their powerful connection with nature to destroy the invaders. Meanwhile John helps the two cosmonauts to survive in the hostile land.” (courtesy IMDB)

This week I have a film from an Academy Award-nominated director, though not for this film – even though they gave one to Titanic (1997). Anyway, this week’s film is more of a montage than a film, which I’ll explain later, and bare in mind that none of the exciting space hardware seen at the beginning of the film is actually in the film proper. At the moment, all you really need to know is welcome to Voyage To The Planet Of Prehistoric Women (1968)! Hmmm, you’d think that once they discovered a planet of prehistoric women there’d be less of a voyage and more of a queue.

Have you guessed the Academy Award-nominated director yet? Go on, I’ll give you a few more minutes – oh, all right then. Derek Thomas, the credited director, is none other than Peter Bogdanovich, the director of The Last Picture Show (1971) – and you were wondering why Voyage To The Planet Of Prehistoric Women looked so familiar – the black-and-white photography, the blonde girl, the fascinating study of small-town alienation…

Yes, Bogdanovich is one of these directors who only has a certain amount of talent in him, that he saves for the special films. That’s why, after making this, he was able to make the great horror film Targets (1968) with one of Boris Karloff’s best last performances, and then go on to make The Last Picture Show, that unfortunately exhausted his talent supply. So he had to build it up again by making What’s Up Doc (1972) before he could make Paper Moon (1973), and that drained him so much he had to make Daisy Miller (1974) and At Long Last Love (1975), before he could even squeeze out Nickelodeon (1976).

His wife at the time, Polly Platt, is the production coordinator of Voyage To The Planet Of Prehistoric Women, and it would have been her job to select the prehistoric women, which is why they’re all lesbians – no, that’s not true. The Bogdanovich’s were a very broadminded couple open to lots of things – at least according to Peter Bogdanovich’s testimony at the divorce hearing.

Speaking of divorce hearings brings us to the only real star in the film – well, more of a white dwarf than a star, really – Mamie Van Doren. Mamie had been married five times, sometimes even longer than a year, and was a popular sex symbol of the time, which was 10.51pm January the eighth 1957. Mamie, real name Joan Lucille Olander, had been in such films as Born Reckless (1958), High School Confidential (1958), and the perennial favourite, Francis Joins The WACS (1954) with Francis The Talking Mule. But despite the gossip, she didn’t sleep with all her co-stars. In some films she was on so quickly she only had time for a quick hand job – or so I’ve witnessed. Those who have heard her talk thoroughly agree with Bogdanovich’s decision to make all the women telepathic.

Now, you must agree that at least the film has some impressive special effects, or did have until 2001: A Space Odyssey (1968) came along in the same year. But it does have impressive special effects for the year it was actually made – 1964. What am I talking about? Remember at the beginning of the show I said this was more of a montage than a movie? No? Do you remember Australia’s first Prime Minister? Well, anyway, most of the film, the bits with the men in them, is from a pretty good Russian film called Planet Of Storms (1964). Because Russia wasn’t a signatory to the Berne copyright convention, Roger Corman got his hands on the film cheaply and made it into two films – Voyage To The Prehistoric Planet (1965) and Voyage To The Planet Of Prehistoric Women. Unfortunately the one time they were on a double-bill together, the patrons couldn’t enter the cinema because the marque blocked the entrance.

Now, not only did Corman make two films out of one, but he also made the Russian footage crappier, fulfilling his patriotic duty as an American. So this explains why an American rocket has a Russian star on the side, and why the robot looks less like Robby The Robot and more like a product of the Russian constructivist movement, so at least which bit comes from where is easy to figure out. If there are men or special effects on screen, it’s footage from Planet Of Storms. If it’s Mamie Van Doren and the sea-shell lingerie girls, it’s Peter Bogdanovich’s stag film.

My God, it’s devoid of stars! So, with Mamie Van Doren made head chef of Venice…I mean Venus, by a dead robot, I bring this week’s entertainment to a close. Please join me next week for a film that will take you to the limits of comprehension the no-where-near-a-classic Prisoners Of The Lost Universe (1983) – pretty clumsy to mislay an entire universe, if you ask me. Thanks for reading, I’m Nigel Honeybone and this has been…Horror News! Toodles! 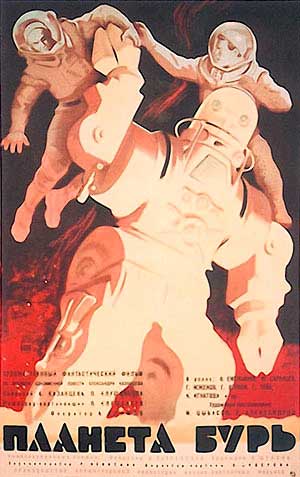 Voyage To The Planet Of Prehistoric Women (1968) 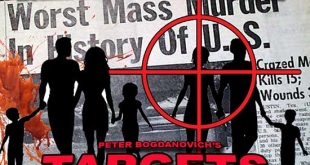