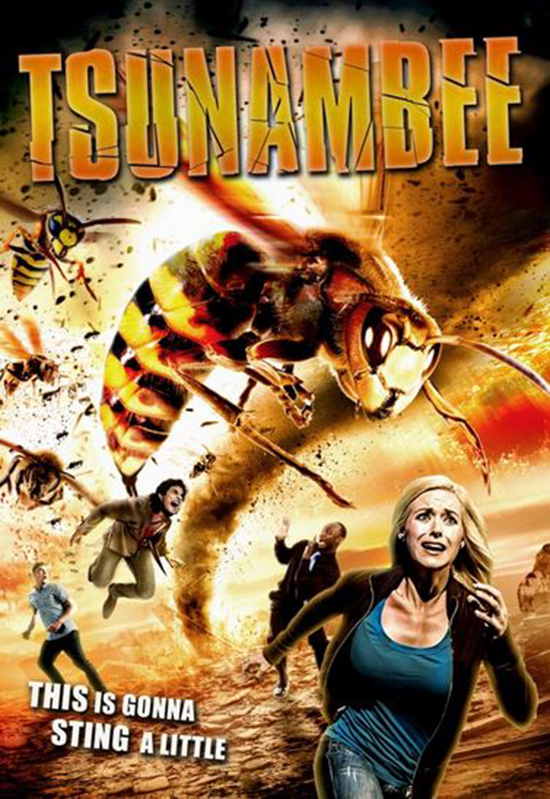 After atmospheric catastrophes send Los Angeles into chaos, three groups of survivors who escaped the city must put aside their differences to face a series of apocalyptic events. As they learn to work together they are faced with an even greater nightmare, giant gravity swells that contain thousands of giant killer bees, intent on ushering in the end of the world.

It is said that, once Pandora’s box is opened, it cannot be closed. Or is that metaphor supposed to include a can of worms? Either way, as a child having my first viewing of Alfred Hitchcock’s 1963 classic The Birds (generally considered to be the first animals running amuck horror movie), I had no inkling of the kind of nature gone mad subgenre which would grow from Hitch’s cinematic seedlings. Well, not only did that plant germinate back then, it continues to thrive and bloom today with new flower buds and just keeps growing. After Hitch’s murderous winged fowlers came psycho bears, bloodthirsty sharks, and more than enough snakes, spiders and other critters on the warpath than many can hand. Even in the 90s and early 2000s when you thought the formula was dead, those folks from the Sci-Fi cable channel (now styling themselves as Syfy) were there to revive it. 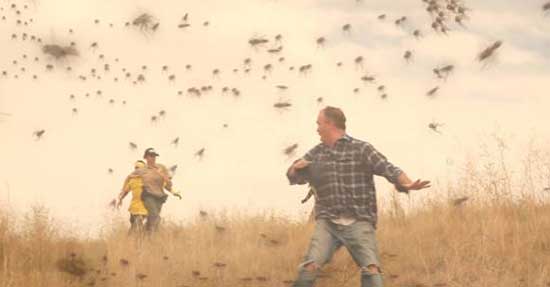 While some elitist arthouse folk ran from it screaming, lovers of bad film and of whichever once-popular star hooked into headlining the marquee of these turkeys clapped with a giddy joy. Fast forward to today, the subgenre is now so firmly alive and in the lexicon of terror viewing that it is taking to expanding its repertoire, so to speak. Movies like the Sharknado series (mixing finned maneaters with tornadoes of all things) are blending themes together for the ultimate bang for your buck. What’s next, earthquakes and mutant octopi? Now, you may think that there will finally be a ceiling on this. That all of the ideas are being played out and there will be no place left to go. The creative team of Thomas Martwick and Milko Davis are looking to shatter that notion right quick. Those guys behind such mashup B-pics as 2007’s Raiders of the Damned and this year’s Z/Rex: The Jurassic Dead, spent 2015 coming up with the first ever giant killer bee/zombie horde invasion/end of days epic manufactured for your pleasure and dollar. It is loopy and action-packed, with variable acting and clichés with biblical apocalypse mumbo jumbo in place of original plot. This is the wild ride that is…..Tsunambee!

After some catastrophes hammer Los Angeles (buildings catch fire, cracks open in the streets etc.), a small group of survivors from different backgrounds try to escape the city without killing each other. Unfortunately for them, their nightmare is just beginning as they are besieged by a swarm of giant killer bees for some unknown reason. Making matters worse, some of the bees victims are inexplicably returning from the dead for more bloody mayhem. Who will survive? What’s behind the bee and zombie attacks?

The script falls in line with The Birds in that, other than the musings of one character that the events are happening because God is angry at humanity for its sins, there is purposely no explanation for either how these mutant bees came to be or how and why the dead are coming back. Like Hitchcock’s classic, none is needed as the meatier aspects of the plot lie in the interaction of the characters and their emotions.

Unfortunately, that is where the similarities in the writing end and a wide chasm forms between the two pictures. Where The Birds had a juicy script by Evan Hunter filled with fleshed out characters and motivations (not to mention a nice pedigree in Daphne Du Maurier’s original story) and a master at suspense in Hitchcock, Tsunambee scribe Davis (doing double duty here) offers only cardboard cutouts in place of characterizations and plot contrivances substituting for motivations.

There’s the young black man who saw someone dear to him killed by police, allowing him to hate cops and just be angry at the world. There’s the lady Sheriff’s deputy who became a cop because she saw her mother killed. And the widower father who protects his daughter because of a promise to his late wife. There’s also a mysterious young African woman who, while her motivations are somewhat vague at first, you know will play a crucial part in the finale and does. Additionally, little help comes from the cast of unknowns. Save for leads Stacy Pederson as the deputy and Ruselus Aumeen Perry as the bitter young hero, both of whom have some charisma and appeal, the remaining support roster is either one-note or just plain ineffectual in bringing any life to their roles. 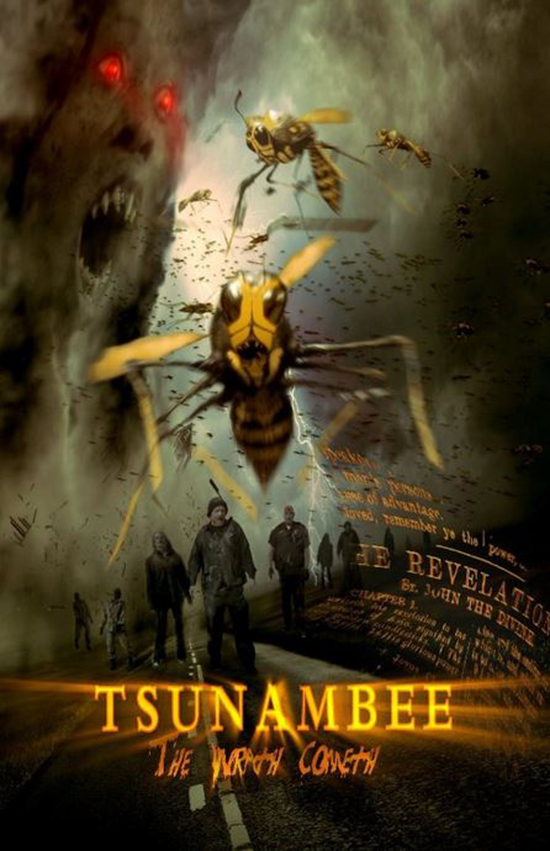 Writing aside, however, Tsunambee is a high treat for fans of action and cgi effects. Davis, perhaps realizing the problems with plot, maintains a breathless pace with several well-staged attack sequences and tight editing (the film clocks in at 82 minutes). Though there are some problems with the varying scale size of the bees (who look normal-sized in some shots and the proportion of a medium size dog in others), the distance visuals of the swarm are cool and the models used in the close-up assaults are realistic compared to other giant insect movies I’ve seen. The ubiquitous blood and gore bits regarding the killings and grotesque makeup for the zombies are well-produced but non-descript for the genre. 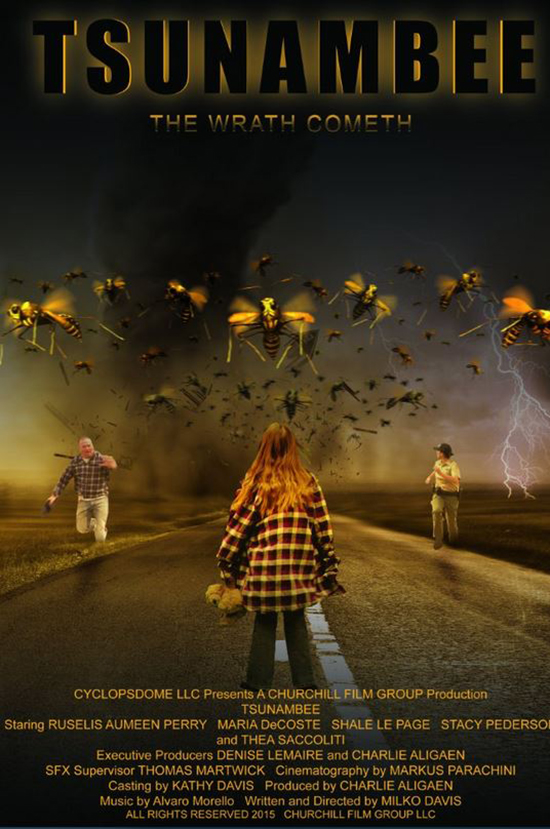 As long as you leave your expectation toward seeing a macabre masterwork ala Hitchcock’s aforementioned avian terror or Spielberg’s human buffet for sharks tale, 1975’s Jaws) at the proverbial door, you should immensely enjoy Tsunambee. You may not know where it’s taking you, but the trip getting to it is a load of fun! 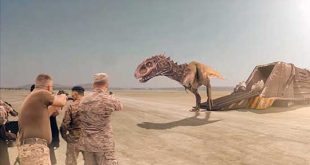