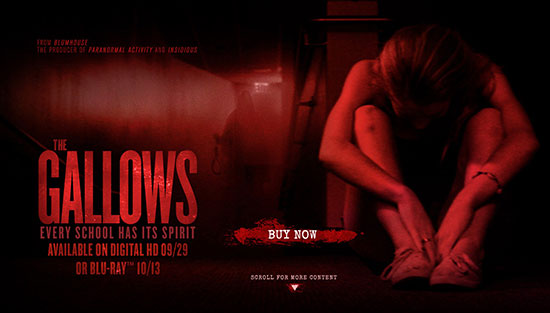 In the horror genre we have films that either thrill and chill us or fail to tap into the core of our psyche leaving us in want for new nightmares. Over the last few years we’ve seen a plethora of films that have tried to terrify audiences and while some hit the mark, not of all of them were particularly good films. The found footage and supernatural tormentor tropes have been particularly hot in the realm of horror as of late and so without any further delay let’s take a look at the top ten reasons why you should not invest your time in watching Warner Bros. “The Gallows.”

Starting in at number ten, the camera shots. Now it should come as no surprise that with a found footage film we have what appears to be an amateurish style of shooting the film. Some films have done this very well in the past, however a great example of this would be the original 1999 film The Blair Witch Project. The Gallows attempts to grab the viewer with an obnoxious young high school student, who is hassling his school chum for trying out for the school play. Throughout the film we have multiple instances where the camera changes hands creating a shaky and disjointed feel to the film. Now while it was likely the intention of the filmmakers to use this effect to jar their audience, it comes off as less startling and more annoying. The shiftiness of the camera hurts the atmosphere of the film and leaves the audience more disoriented than entertained. 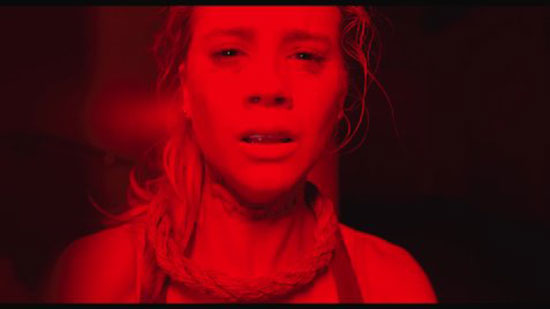 Coming in hot behind the shaky camera at number nine, is the victims aren’t relatable. Some horror films don’t care about whether you like the people they kill and we understand that, but as we watch The Gallows, we not only don’t like our would-be survivors we find ourselves rather bored with them. Horror films often have trope characters the tough, headstrong jock, the scream queen, the mewling and sniveling beggars, and the list goes on. This film’s characters have very little substance and as our young survivors progress that don’t develop overly much. Our leading man Reese Houser, is the only character that shows much in the way of the development as he discovers a dark secret about his past in the film, but ultimately his character remains utterly blinded by his obsession with our female lead Pfeiffer Ross. Our other characters Ryan Shoos and Cassidy Spiker serve as little more than kill-fodder.

The one-dimensional characters would be bad enough on their own, but I promised you ten reasons not to see this film. So here at number eight on our list of movie sins is predictability. The horror genre has its limitations and there is truly only so many ways we can create scenarios that realistically could prove terrifying and tantalizing to its hungry audience. Despite that The Gallows, lacks that heart-stopping factor of unpredictability from one scene to the next the audience can find themselves not only quickly connecting the dots, but seemingly writing the film themselves. From the separation of the characters and their inevitable deaths this film, is a step-by-step instructional video on how not to make a good horror film. The film doesn’t seem to even try to keep you in suspense it drives you headlong into boredom rather than terror. You’ll have to do better than “Oh, no the lights went out,” or “I have no cell phone signal,” to separate yourself from the pack in the realm of nightmares and this film fails on that count. 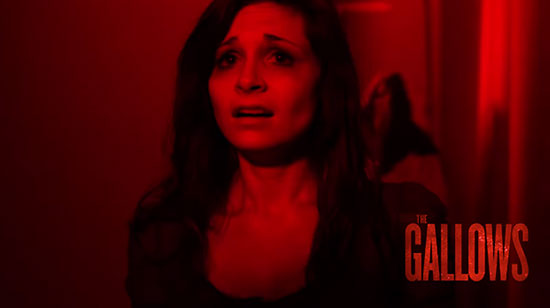 Reason number seven not to watch this film, the killer isn’t scary. We have seen some truly iconic murderers in the horror genre. The genre that gave us Pinhead, Michael Myers, Jason Voorhees and Freddy Krueger somehow unfortunately gave us Charlie Grimille as well. Charlie is the ghost of a cast that had performed the school play twenty years prior to the time of the film. Aside from being a vengeful spirit bent on killing the teens dumb enough to break into school after hours, he’s a pretty bland killer who really doesn’t scare the audience. Not every film has to be bloody or have a high body count to be a screamer, but our ghost here is a burlap-sack wearing, rope-toting slowpoke who rarely appears as anything more than a shadow until near the very end of the film. While this film attempts to tap into the realm of the supernatural and emphasizes off-screen kills to create tension, our killer is so bland that we almost would prefer he never appear.

Aside from our killer being bland, the lack of tension in the film is yet another reason to avoid it. Horror films are meant to entertain us and take us on a tense, roller-coaster that gets our adrenaline pumping. The Gallows utterly and completely fails to do this. Instead of taking us for a ride this film has its audience wanting to get their keys and go for a ride with a slow and almost elementary level plot. Not only does the pace of the film start out at a snail’s pace with our cameraman Ryan poking fun at his classmates as they prepare for the school play, but even after our youngsters have been locked inside their school the pace of the film crawls forward. Our first kill takes place after almost a grueling forty minutes, and even after the first kill the film does very little create an atmosphere that gets our blood pumping. 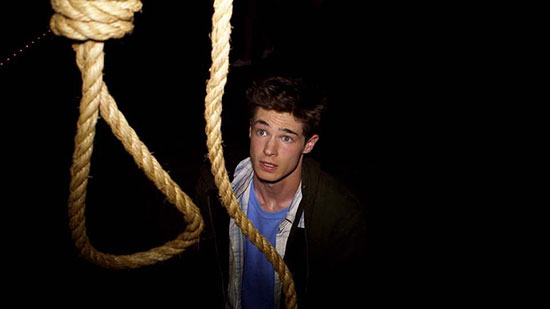 Now that we’ve reached the halfway mark on our list, we can move away from the lack of tension in the film to talk about another big downside to this film: the dialogue. The dialogue in this film is incredibly boring and further contributes to the film’s predictability. We have the early interaction between young Ryan and a member of the original cast from twenty years ago. Aside from that we get an interview style exchange between Ryan and people from the community who warn him of spooky occurrences in the theatre such as lights turning on and off and doors opening or locking on their own. Throughout the rest of the film we get a scrambled and hurried jumble of screams and desperate attempts at consolation between the survivors. These exchanges leave the audience hoping they die before the characters do so they don’t have to endure anymore cliché.

If you’ve stuck with me this far, then you deserve another reason to just pick another movie to watch. Our fourth deadly sin, is the cheesiness of the film’s attempt at foreshadowing. While, I briefly mentioned exchanges between Ryan and the film’s throwaway characters at the outset of the film in a somewhat positive light, their attempt to create some semblance of foreshadowing is weak and lazy at best. We are told through Ryan’s interviews at the film’s outset that the theatre has had a history of paranormal activity and that it’s not a place you want to be after dark, but the lead in our kills is the mentioning of Charlie’s name. On only a few occasions in the film do we have characters chide Ryan or others for saying his name on stage, but it isn’t until Ryan is injured after falling from a ladder that was seemingly shook by “Charlie” that we are given any real sense of foreboding by the invocation of his name. 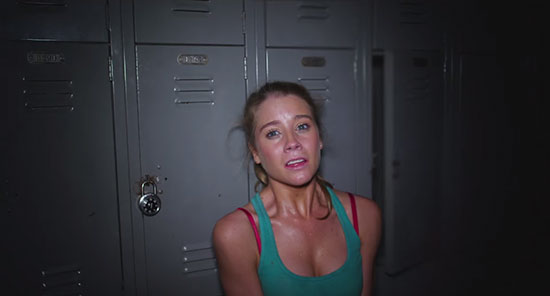 We’re nearing the end together, which is fitting because the third major drawback to this film lies in its conclusion. Horror films are often defined by their endings whether it’s Freddy Krueger jumping out of a mirror for one last scare or Jason Voorhees walking into Crystal Lake, the great films in horror are known for their iconic endings. When The Gallows ends you’re relieved rather than terrified or shocked. We get a cliché showdown between the police and the “collaborators” who played a role in the deaths of our teenage screamers. We enter an isolated maintenance room where Pfeiffer Ross and her seemingly, now deranged mother are watching the video recording of Charlie being hung and finish with the two cops being killed by Charlie’s ghost after a rather lazy warning by Pfeiffer to the officer to not say Charlie’s name. The screen goes black after Charlie’s bag-headed face eclipses the screen briefly in a sad attempt at one final scare. The ending itself is a sad attempt to use a very iconic trope in the horror genre and it fails to make an impact because quite frankly Charlie isn’t scary. A final jump scare with our killer is common in the horror genre and it has been effective in many cases, some of which I have referenced already, but the key to using this tool effectively is having a killer that the audience actually fears.

At number two we have a desperate attempt to gain the audience’s sympathy made by one of the film’s main characters, Cassidy Spiker. Sympathy and a connection with characters in a film, work best when achieved organically. We need to feel bad for the characters not because they are going to die, but because we know them. Cassidy appears as almost a side character with the other three teens taking the lead throughout much of the film. The film tries to shy away from that in one brief moment with Spiker holding the camera up so the audience can see her neck has suffered rope burn from one of Grimille’s attempts to snare her with his noose. While the attempt at shock-value is admirable, the wounds she has are superficial and do little to add to the film. Additionally, the audience can easily see that the reasoning for her shifting the view of the camera to herself is to hide the movements of Grimille from the audience so he can kill her. 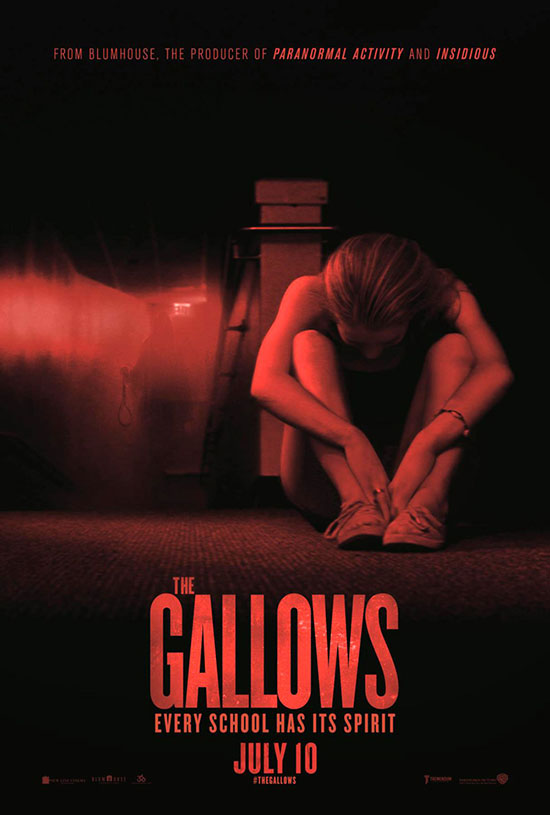 Finally we’ve reached the end of our list and the last reason why you should avoid watching The Gallows. A lack of originality is the final sin on the list of reasons why this film is an absolute waste of your time if you’re a fan of horror. This film attempts to cobble together so many tropes from the horror genre that it ends up being little more than a mish-mash of tropes with little to no real story of its own. We get the attempt at an urban legend meets the found footage trope, but then the story takes a dive into the realm of the paranormal and tries to add in the feel of an old-school slasher film. It fails miserably to do all of this. This film is an amalgamation of squeaky doors, dark corridors and jump scares that would have done better if it had picked one train and rode it. This film’s attempt to cobble together so many tropes should be a lesson to future guests in the genre to pick a theme and stick with it to the end rather than try to shove so many themes down the throat of the viewer. If you are looking for a film that will have you looking over your shoulder or waking up in a cold sweat this film is not for you. The only thing about this film that will give you nightmares is how agonizing it is to watch people fumble cameras. 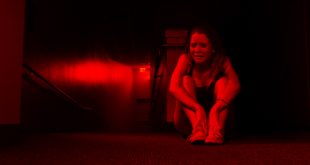