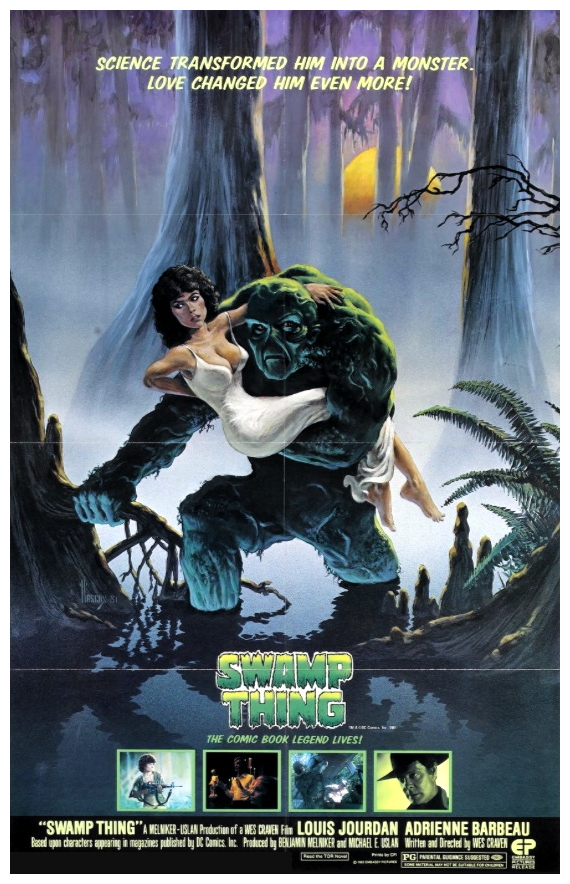 “Doctor Alec Holland, hidden away in the depths of a murky swamp, is trying to create a new species – a combination of animal and plant capable of adapting and thriving in the harshest conditions. Unfortunately he becomes subject of his own creation and is transformed. Arcane, desperate for the formula, attempts to capture the Swamp Thing. An explosive chase ensues that ultimately ends with a confrontation between Holland and a changed Arcane.” (courtesy IMDB)

Marvel Comics introduced Man-Thing in May 1971, while DC Comics introduced Swamp Thing in July, a mere two months later. The two characters are very similar – a scientist accidentally ‘fuses’ with the surrounding swampland to become a large, slow-moving, empathetic, humanoid muck-monster. As you can imagine, there has been much debate about which was first, but the inspiration for both creatures was a 1942 comic character known as the Heap, created by Harry Stein and Mort Leav, which proved so memorable that it was parodied in a 1953 Mad magazine, and revived in the eighties by Eclipse Comics. Swamp Thing, created by Lein Wein and Bernie Wrightson, was a creature that had gained sentience after a man was murdered and dumped in a swamp. The account from their first story in House Of Secrets #92 had scientist Alex Olsen caught in a lab explosion purposely triggered by his rival Damian Ridge in order to get closer to Olsen’s wife Linda. Olsen’s body is resurrected as a swamp creature that seeks vengeance for Ridge’s betrayal. After he murders Ridge, he finds out that Linda knew all about his plans. The monster tries to kill her too, but cannot bring himself to murder the woman he loved. 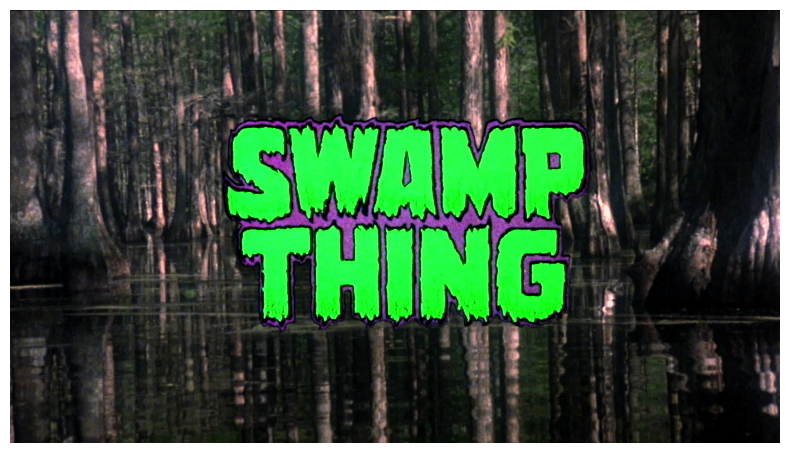 The story resonated with many of readers who called out for an ongoing series so, in October of 1972, the Swamp Thing comic book was born. The revised plot had Alec Holland tinkering with an experimental formula that would change deserts into forests but, when Holland is killed by a bomb planted at his Louisiana laboratory, he mutates into a muck-encrusted mockery of a man known as Swamp Thing. The comic series ran for twenty-four issues until 1976, and detailed Swamp Thing’s efforts to find the men that killed his wife and turned him into a monster, while seeking a way to make himself human again. When sales dived in 1976, every effort was made to revive the series by introducing aliens and other monsters, but it was too little too late. After the series was cancelled, Swamp Thing made a number of guest appearances in comics until the early eighties, when a live-action movie was proposed. During a time when there seemed to be too many movies filled with creatures of horror who let blood with a driving mindlessness, Swamp Thing (1982) lumbered from the murk and mire like a breath of fresh air. 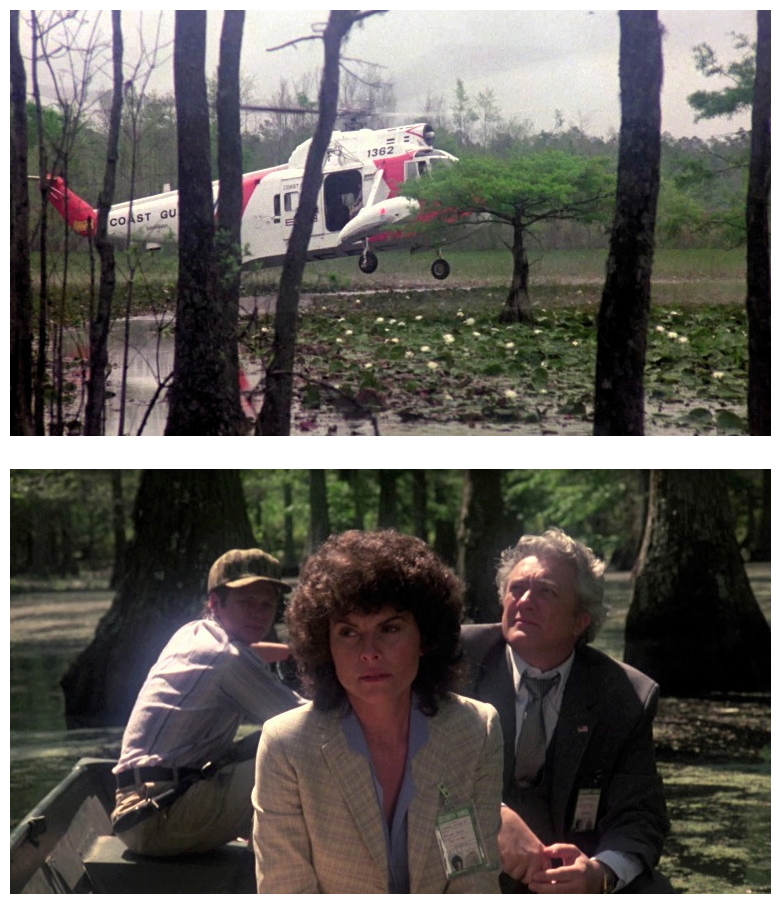 Written and directed by horror maestro Wes Craven – creator of A Nightmare On Elm Street (1984) and Scream (1996) franchises – the film could easily be dismissed as so much swamp gas, but the actual results are a rather pleasant surprise. Craven based Swamp Thing on the comics of course, even though previous combinations of comics and films had (more often than not) produced less-than-desired results, with reactions ranging from indifference from filmgoers, to pure hatred from comic fans. Not so with Swamp Thing which, if not entirely successful, sincerely tries to deliver what it promises. Promises include exciting action, sympathetic characters, beautiful locations, believable situations and, hopefully, a new cult hero. It starts with a prologue which states, “Not long ago, in the unexplored reaches of an unmapped swamp, the creative genius of one man collided with another’s evil dream and a monster was born. Too powerful to be destroyed, too intelligent to be captured, this being still pursues its savage dream.” 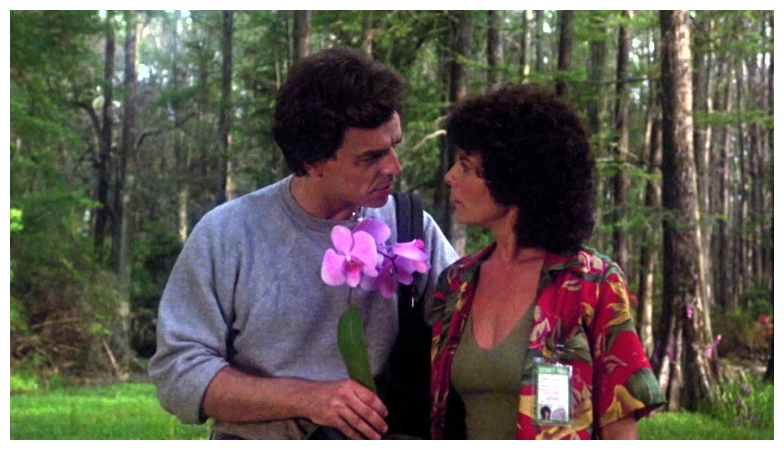 A scientist creates a formula (a hormonal plant bio-restorative developed as part of a top-secret bio-engineering project to create a plant-animal hybrid entity capable of co-existing in extreme environmental conditions) which, while being beneficial, could be dangerous in the wrong hands. Of course, those with ‘the wrong hands’ appear but are done in at the story’s conclusion by the dangerous elements of said secret formula. Ray Wise, veteran of 250 films and television shows, not least being Twin Peaks (1990/2017), plays Doctor Alec Holland, who has been housed by the US government in a secret swamp base where he and his sister Linda (Nanette Brown) are trying to perfect a formula that will combine plant and animal cells. Essentially his first film, Wise is very effective, showing Holland as a dedicated researcher who allows the ‘little boy’ to come out in his character when exciting discoveries concerning his formula are made. 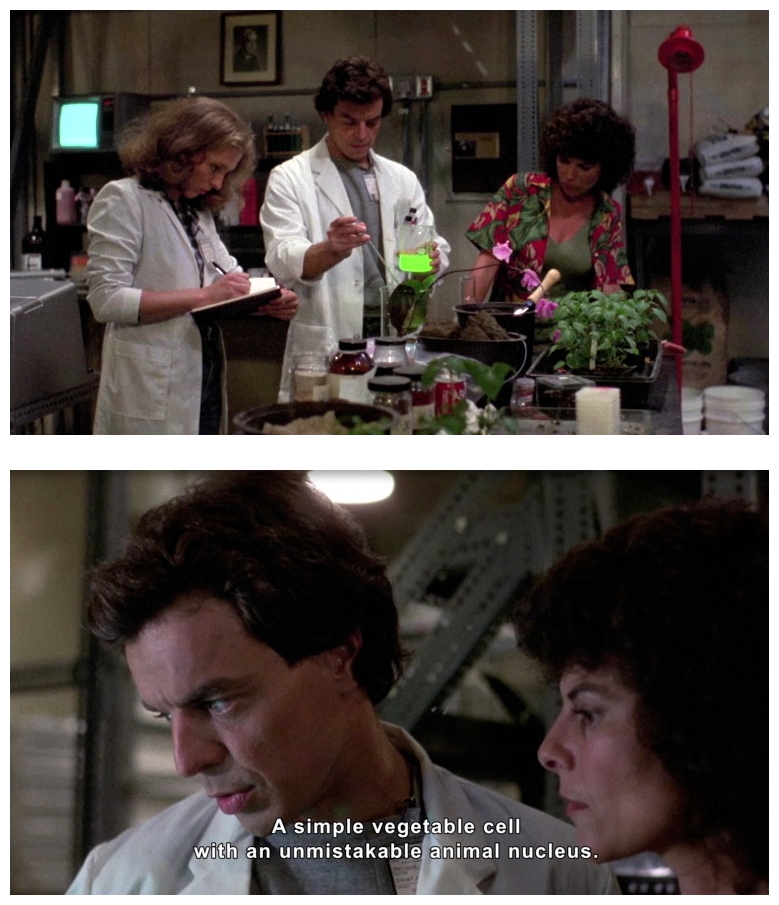 Adrienne Barbeau chalks up a fine performance as special agent Alice Cable (a female version of the DC character Matt Cable), assigned to protect the Hollands. In the course of events, she proves herself to be one tough customer, wielding semi-automatic weapons and karate-chopping her way through armies of armed villains while maintaining a sultry sexuality that makes her love interest role with the transformed Holland actually convincing, despite its bizarre connotations. David Hess, who played a torturer in Craven’s first film The Last House On The Left (1972), returns as Ferret, leader of the commando team that attacks and destroys the Holland outpost in an effort to gain the experimental formula. Hess is impressive as a villain who won’t stay down, and viewers will feel absolutely no remorse when he finally gets his comeuppance in classic Craven fashion. The special effects and stunt work, while not over-used, provides one of the film’s best moments. Bathed in burning chemicals, Holland races from his lab and plunges into murky swamp water, in what might be the most horrific scene in the film. 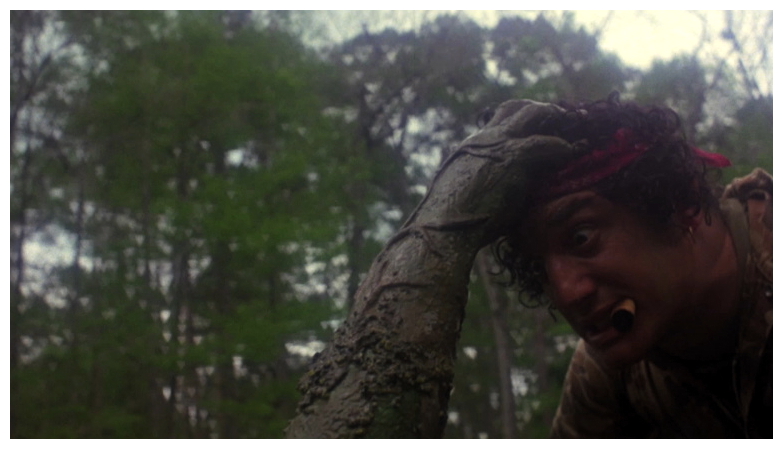 Some might be convinced that an actual actor had lost his life in the scene, while fans who thrive on such sequences will wish the scene was longer. The first two-thirds of the film is dominated by chase sequences through the beautifully filmed South Carolina swamps which are effective enough, but it slows to a halt with the introduction of the main villain, Anton Arcane, played by veteran Hollywood actor Louis Jourdan. Jourdan was known for his romantic roles in The Paradine Case (1947), Letter From An Unknown Woman (1948), Gigi (1958), The Best Of Everything (1959), and later as villains in Count Dracula (1977) and Octopussy (1983). Jourdan’s performance as the evil Arcane is eerily malevolent and contrasts well with the malicious Ferret – while Ferret seems to enjoy his nasty acts, Arcane practices his evil ways because that is the necessary path towards his goal of world domination, a goal he and his elegant entourage of followers seem to believe is a natural and correct one (in the early comic series, Arcane is Swamp Thing’s most notable adversary, and his obsession with gaining immortality drove him to madness). 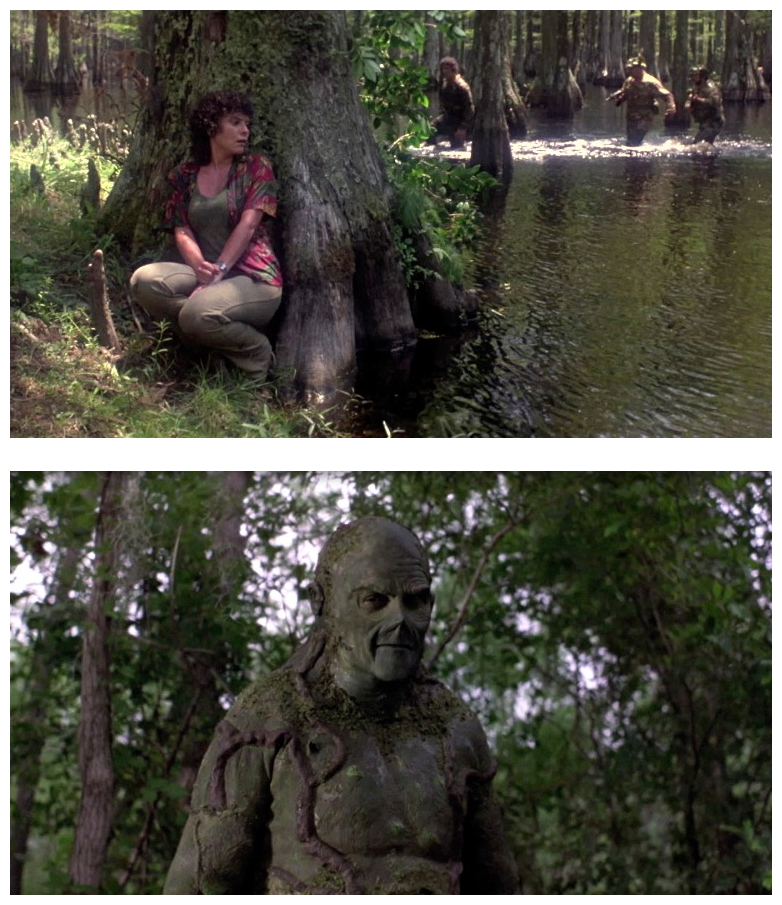 Jourdan tries to play it cool but, unfortunately, he comes across as simply distant and remote. At one point Arcane likens his pursuit of Swamp Thing to a chess game, but the film story equates better to a boxing match, with the first rounds going to the filmmakers, and the fourth to a slowing of pace, before a thrilling knock-out by Swamp Thing in the fifth. The tone of the film and its storyline come together in a single exchange between Cable and Swamp Thing (played by stunt man Dick Durock with Wise’s filtered voice): After saving Cable but losing his arm (which quickly grows back) she asks, “Does it hurt?” to which he replies, “Only when I laugh.” Their laughter dissolves into sobbing as they remember what a horrifying situation they’re in. This illustrates the effectiveness of the story, the acting, Craven’s direction and Bill Munn‘s excellent makeup and costume through which Durock had to emote with only his eyes and limited lip-movement. 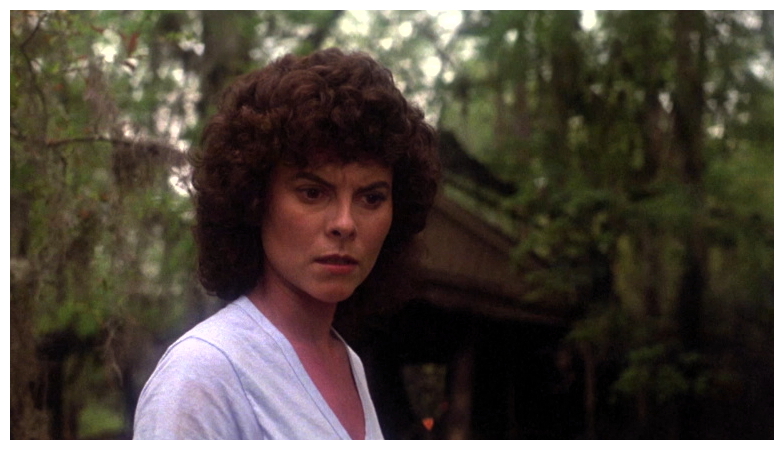 Other cast notables include Nicholas Worth as henchman Bruno who, unlike most henchmen in comic adaptations, eliminates all campiness so often associated with such roles. With his powerful baritone voice, Worth specialised in playing menacing characters, best known as the tormented necrophiliac serial-killer of attractive young women in Don’t Answer The Phone (1980), and the fearsome homosexual rapist in The Rape Of Richard Beck (1985). Young Reggie Batts as Jude, who aides Cable in escaping the swamp, delivers some of the film’s best lines in a garbled fashion, but this somehow adds to the realisation of his character (you might want to switch on the subtitles during his scenes). It may come as no surprise that this was the only film that Batts ever acted in, although it may surprise you to learn he became one of the world’s leading motivational speakers. Adrienne Barbeau barely requires introduction but, if you don’t recognise the name, you may remember her in The Fog (1980), Escape From New York (1981), Creepshow (1982) or as Bea Arthur‘s daughter in the situation comedy Maude. 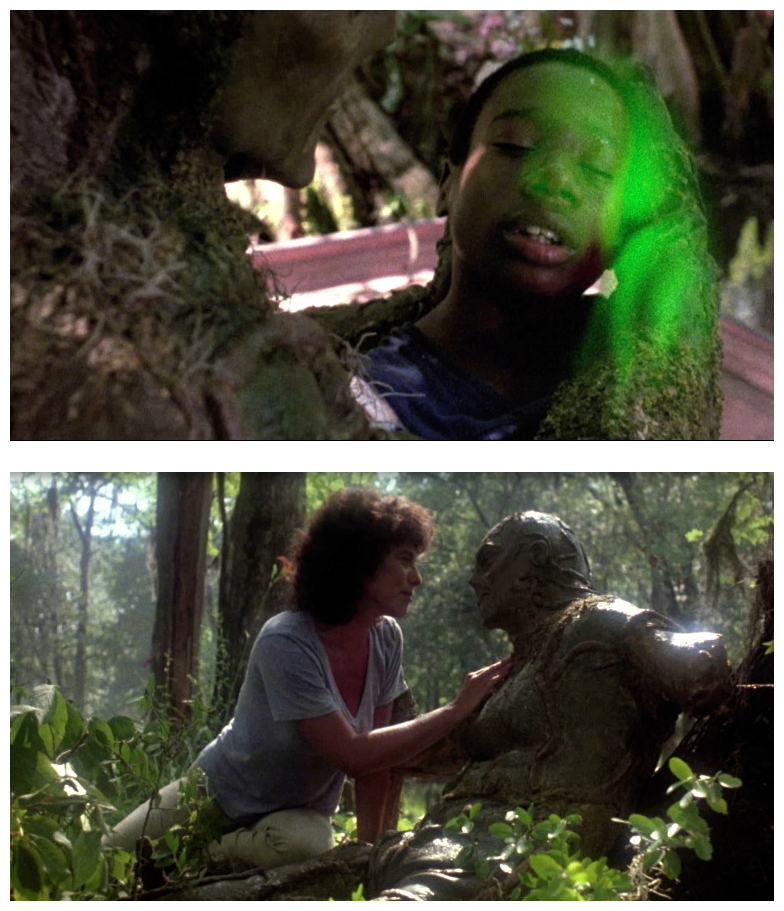 The soundtrack was composed by Harry Manfredini, responsible for the much of the music heard in the Friday The 13th (1980) franchise and, unfortunately, many of those themes are reprised in Swamp Thing, so don’t be surprised to find yourself humming along. Craven shot most of the picture on location in Charleston, South Carolina and nearby Johns Island, because of the picturesque scenery. The film made enough money to warrant a direct-to-video sequel entitled The Return Of The Swamp Thing (1989) directed by Jim Wynorski, which has a much lighter tone. Jourdan and Durock reprise their roles, ably supported by Heather Locklear and Sarah Douglas. The 1990 live-action television series (which also starred Durock as Swamp Thing) was cancelled after only seventy-two episodes and, in 1991, an animated series was attempted by DiC Entertainment which was cut short after only five episodes. 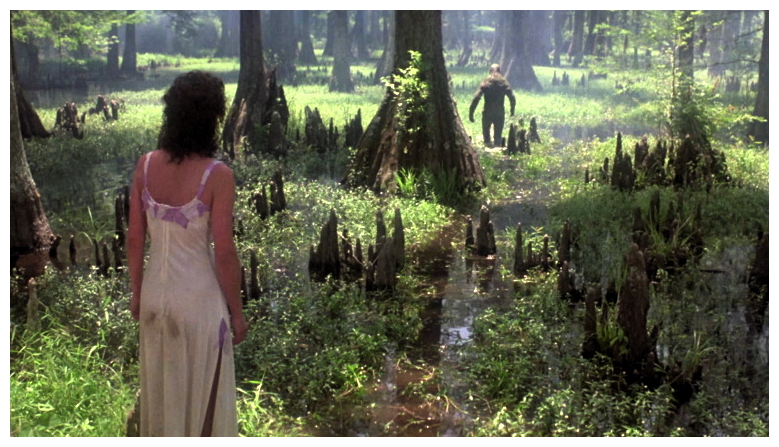 After the moderate success of the first film, the Swamp Thing returned to the comics in a collection called Saga Of The Swamp Thing, and followed him on a series of international adventures as he attempts to stop a woman from destroying the world. Later, Alan Moore‘s Swamp Thing brought the book back to its horror roots and even looked like it was published in the fifties. Moore’s stories gathered together forgotten and minor characters from the DC universe, and created an entirely new mythology that was continued by Neil Gaiman. John Constantine (from the comic Hellblazer) tells Holland that he is truly dead and that his swamp creature is actually a plant elemental capable of superpowers and, more recently, the Swamp Thing stories have focused on Holland’s daughter and her connections to the supernatural realm. Right now I’ll ask you to please join me again next week when I have the opportunity to tickle your fear-fancier with another feather from that cinematic ugly duckling known as Horrorwoodland for…Horror News! Toodles! 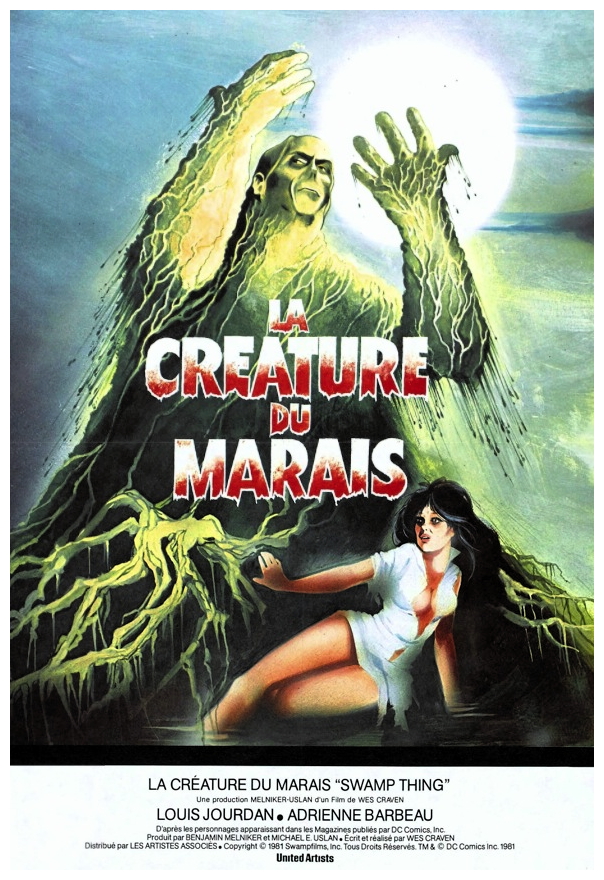