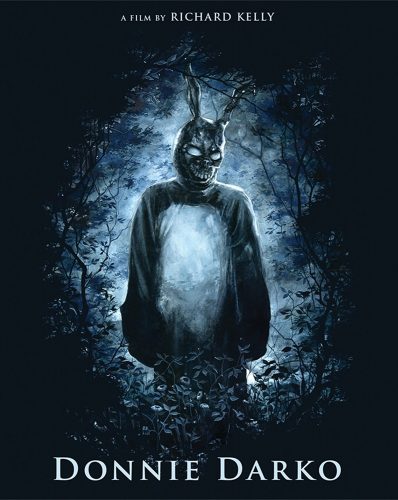 High school student Donnie Darko survives a bike accident and is suddenly thrust into visions of the world he has never seen before and begins to question his own sanity when a man named Frank appears to him dressed in a maniacal rabbit costume, and questions about love, identity and time travel begin to concern him.

There is something unsettling about watching a film that takes place in high school that automatically causes me to groan or roll my eyes. Having been away from it for three decades, I have put enough distance between myself and it to know that I don’t want to revisit the jocks, the cheerleaders, the stuck-ups, the burnouts, the bullies, or the teachers who did everything except teach. When a film comes along that is set among what Holden Caulfield would refer to as “phonies” or “morons”, my automatic instinct is to say “Thanks, but no thanks.” I lived it, breathed it, enough said. There are cinematic exceptions however, as anyone who has sat through Amy Hecklerling’s Fast Times At Ridgemont High (1982) or Clueless (1995) can attest to. American Graffiti (1973), arguably the Greatest High School Film of All-Time, feels timeless despite taking place in 1962. Richard Kelly’s highly watchable, genre-bending, career-making but ultimately box office disappointing Donnie Darko, which opened in select markets on Friday, October 26, 2001 in the wake of the September 11th attacks and takes place in Virginia in October 1988, is a high school film of a much different sort. It paints a nihilistic view of the world as seen through the eyes of the titular hero (Jake Gyllenhall) who wakes up on a road while bike riding, only to come to home and have a jet engine crash into his bedroom. His parents Eddie and Rose (Holmes Osborne and Mary McDonnell) and his sisters Elizabeth and Samantha (Maggie Gyllenhaal and Daveigh Chase) are equally blindsided by the accident that forces them to temporarily relocate to a hotel. The FAA is also baffled as they have no reports of jet traffic in that vicinity and are eager to be acquitted of any wrongdoing with little regard to the family’s safety. Following this incident, Donnie is visited by Frank (James Duval), a strange man in a maniacal and deranged rabbit costume who informs him that the world will end in 28 days, 6 hours, 42 minutes, and 12 seconds.

One of the film’s most revered moments occurs when the students enter the high school in slow motion to the tune of “Head Over Heels” by Tears for Fears which recalls the signature long tracking shots into the boxing ring and the Copacabana nightclub in Raging Bull (1980) and Goodfellas (1990) respectively, both directed by Martin Scorsese. Not only does this create a superb cinematic moment but it also is a wonderful introduction to the characters and most importantly, their relationship to one another.

Donnie is in therapy and his therapist, Dr. Thurman (Katherine Ross), grills him on the mysterious Frank who compels Donnie to commit crimes on his behalf. When the water main at school floods the hallways, the administrators eye the troublemakers, one of whom is portrayed by Seth Rogen fresh off of the success of Freaks and Geeks.

Gretchen Ross (Jena Malone) is the new girl in school who has moved to town with her mother to escape her abusive stepfather. Desperate for affection, Gretchen develops a romantic relationship with Donnie. Gym teacher Kitty Farmer (Beth Grant) takes issue with English teacher Karen Pomeroy (Drew Barrymore) teaching Graham Greene’s short story The Destructors to impressionable young people and takes it upon herself to espouse the philosophies of a motivational speaker, Jim Cunningham (Patrick Swayze), who is subsequently outed as a pederast after Donnie burns his house down at Frank’s urging and child porn is found by the authorities. Donnie also expresses interest in time travel and talks at length with his science teacher who gives Donnie a book, The Philosophy of Time Travel, by Roberta Sparrow, a woman who was a science teacher at the school years earlier, but now appears to be an elder who is suffering from dementia. The film eventually comes full circle to the jet engine crashing into Donnie’s room, and an explanation of Frank’s identity that surrounds a Halloween party, leaving the viewer to be more than a little confused yet eager to view the film subsequent times which, of course, permits us to see things we missed the first time around…

Donnie Darko is a captivating film, a truly ambitious original in a landscape dominated by movies that seem to resemble manufactured amusement park rides more than compelling examples of storytelling. The fact that it was made at all is startling and no doubt a tribute to the executive producing of actress Drew Barrymore. There are a lot of familiar faces in this film and, like the aforementioned Graffiti, it put a lot of vaguely familiar performers on the path to successful careers.

Arrow Video has done a bang-up job of restoring the film to its original 4K glory. The two-disc Blu-ray set comes with the 113-minute theatrical cut and the 134-minute director’s cut, each on two separate discs.

The extras are plenty:

All in all, this is a brilliantly put together package that any true fan of the film needs, regardless of what previous versions they already own. For more reading on the film, click on http://www.donniedarko.org.uk/philosphy-of-time-travel/