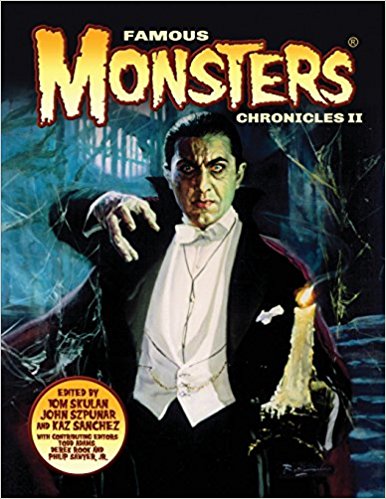 Now before we get into the contents, a few words on Chronicles II (Fantaco’s Chronicles) and its predecessor. Per research, Chronicles I, the first edition was printed in 1991 and edited by Dennis Daniel. The book itself became a rare item as it eventually went out print.

Chronicles II carries over it’s original content while adding in more articles, interviews, and Famous Monsters retro inclusions. Included this time is a chapter devoted to the famous monster trading cards complete with front and back imagery. The new edition contains 240 pages available in paperback, hardback, and digital formats. It is noted as taking 3 years to research while also featuring a brand new cover cleaned up and ready for bookshelves. This edition contains 3 complete indexes chronicling the content of every Warren issue of FM. This resurrection of the Famous Monsters chronicles edition was funded about a year ago per a kick starter initiative that lead to this final release.

Note: It’s first edition release in hardcover is limited to only 100 copies (so get yours right away!)

So there ya go, a lil history on this release as it has been excavated, shined up, and reworked for the masses in this shining new 2017 edition. Horror fans who have seen other such magazine collectives come out in recent years will definitely want this release aligning your shelves. For some of us older fans, the joy not only comes out of a enhanced collective, but simple being able to peruse the familiar covers we have seen over the years. Remember….. before we had the internet, social channels, and various printed magazines covering the horror market…there was only 1 source of monthly horror updates, Famous Monsters of Filmland.

Not only is this book a retrospective, but a staple of how the market has changed over the years with horror content in general. Yes, the belts of censorship and types of horror content has expanded greatly holding our hands with icons such as Frankenstein to Freddy Krueger to Pinhead and uncensored zombies. Much has moved from “safe horror” to “banned horror” into well………. mainstream and every alteration and version film makers can muster.

Contents inside contain every “Famous Monsters of Filmland” cover from issues 1 to 191 (complete with content listings for each issue). If that doesn’t meet your needs then there is an additional index included in the book that lists the films by actors and directors. Yet…. if that isn’t enough then you’ve also got 1 more index listing out the magazines per movie titles. So one way or the other, you have the means of tracking down your favorite issue contents. Though don’t stop their as an additional section offers more of the same focusing on yearbooks, game, and souvenir books.

Now of course this book wouldn’t be complete without some good ol fashion famous monsters retro content included for fans of the old school style magazine formats. With that we have several interviews, cartoons, a mystery phone department inclusion and goodies delivered straight from the archives.

As a collection, this book brings all the goodness from days past into a nice volume of monstrous proportions. Collectors will want to jump on the new release featuring a custom Basil Gogos cover art piece.

Readers will delight in special interviews with original creators and artisans of this groundbreaking iconic movie monster magazine series.

Born in 1958, Famous Monsters of Filmland magazine became a life changing journal for many creative people.

This book contains the only complete indexes to every one of the original Warren Publishing Company issues along with reminices by some industry leaders.

Published by Fantaco in 1991 and edited by Dennis Daniel. A complete index to all 191 issues of FM, the Yearbooks, “Monster World” #1-10 and the FM paperbacks. Each listing also contains a cover photo. Too much to cover here, but there’s Greg Theakston’s “Warren Report”, interviews with FM cover artists and others, tributes from top writers, reminiscences from actors, writers and directors and a wonderfully nostalgiac cover by Theakston. A must for the FM fan. 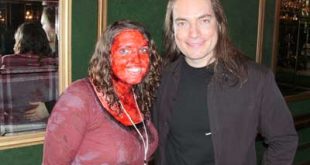