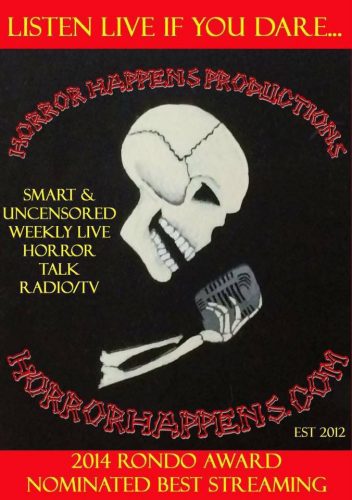 They will be talking about his entry into the NIGHTMARE ON ELM STREET franchise as well as the up and coming FREDDY FEST at the Palace Theatre in Syracuse, NY on October 14th!

Sholder will join a stacked lineup of live guests on HORROR HAPPENS RADIO as they enter the “Bunker in Blairstown” including FEAR FRONT PUBLISHING authors Lori Myers & Preston Fassel along with actress Stefanie Estes of the film BETHANY and members of the MONSTER CHARITY PROJECT.

Episode 217 starts around 3 PM EST on Tues May 9th and can be heard on HomeGrownRadioNJ and through the TuneIn App.

Read below for the full press release on the film festival! Thanks for tuning in live and sharing!

FREDDY FEST : A NIGHTMARE ON ELM STREET FILM FESTIVAL TO TAKE PLACE AT THE PALACE THEATRE

Fresh off the heels of the 12th annual Salt City Horror Festival, After Dark & SCHF are proud to announce FREDDY FEST : A NIGHTMARE ON ELM STREET FILM FESTIVAL on Saturday, October 14th at The Palace Theatre in Syracuse, NY.

The all-day event will screen the A Nightmare On Elm Street franchise along with Jason Vs. Freddy on the big screen and on original 35mm print. In addition to the films, the event will feature special guests from the including Mark Patton, Kim Myers, Clu Gluager & director Jack Sholder for a special “A Nightmare On Elm Street part 2 : Freddy’s Revenge” reunion with a discussion & panel about the film. More guests, “The Elm Street Market” vendor mall & other surprises will be announced as the event comes closer. 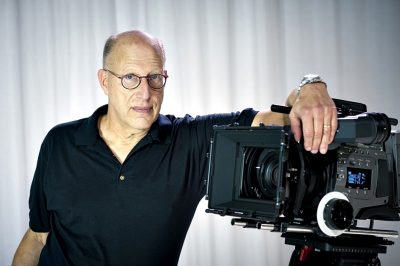 Limited early bird tickets for Freddy Fest go on sale this Friday, April 21st at noon for $25. VIP packages and special combos will be available as well. Doors open at Noon.

Film lineup (all shown on 35mm)

A Nightmare On Elm Street 4 : The Dream Master

A Nightmare On Elm Street 5 : The Dream Child

Presented by After Dark Presents & The Salt City Horror Festival 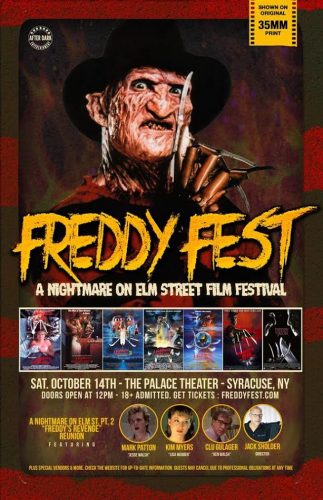