Film Review: The Chronicles Of Riddick (2004) 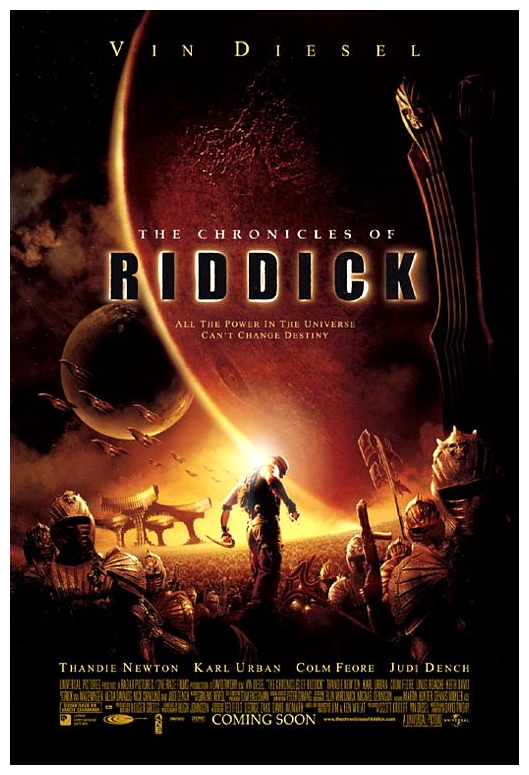 “Five years ago, convict Richard B. Riddick escaped from a desert planet with his two companions, religious man Imam and runaway teenage girl Jack. After five years of wandering across the outskirts of the galaxy and being stalked by bounty hunters, Riddick arrives on the colonised planet of New Mecca, where he learns who placed the bounty on his head and that Jack has been imprisoned on the prison planet Crematoria for murder. Riddick encounters Aereon, an ambassador of the Elemental race who is seeking Furyans in an effort to balance the universe, as a warrior army known as The Necromongers led by the evil undead Lord Marshal are invading every planet in the galaxy and cleansing all of humanity in their goal for universal conquest. Believing Riddick is a Furyan warrior, Aereon decides to hire Riddick believing he is the one man who can stop the Lord Marshal. When the Necromongers attack New Mecca, Riddick is captured by cocky bounty hunter Toombs and transported to Crematoria, where he reunites with Jack now known as Kyra. Together they escape to the planet’s sun-ravaged surface, where Riddick is helped by Necromonger warrior Vaako and his sexy wife. Riddick sets out to defeat the Lord Marshal, save the universe from the Lord Marshal’s rule and save the rest of humanity from being converted into Necromonger warriors.” (courtesy IMDB)

Back in the nineties, screenwriters Jim Wheat and Ken Wheat created a script which, not unlike Alien (1979), involved an ensemble of characters trapped on an isolated planet surrounded by hungry extraterrestrials that only come out at night. The screenplay sat on the shelf at Polygram Films for many years before being substantially rewritten by director David Twohy. Reasonably cheap to produce and set on a desert planet without too much production design involved, Pitch Black (2000) was very much a character-driven piece with some excellent performances, not least being Vin Diesel as a convicted murderer named Richard B. Riddick (no great actor by any stretch of the imagination, Diesel recognises his limitations here and is perfectly cast). Receiving only a brief theatrical release the film became a huge cult hit on DVD, and the demand arose for a sequel and more of the mysterious anti-hero Riddick. 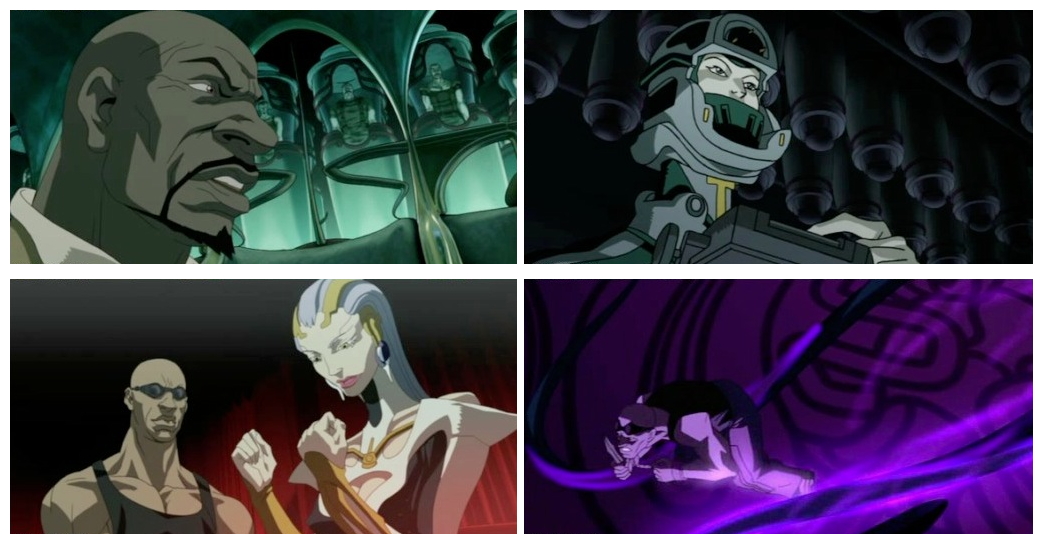 Opposed to remaking the same low-key horror story again, Twohy chose to go in completely the opposite direction, attempting instead to create an in-depth futuristic science fiction universe from scratch. First of all, to assist the audience in bridging the enormous gap in style from Pitch Black to The Chronicles Of Riddick (2004), Twohy produced a 35-minute animated short film entitled Dark Fury (2004) directed by Peter Chung, creator of the excellent animated television series Æon Flux (1991). It is the year 2578 and, soon after escaping from the planet of hammerhead monsters in Pitch Black, Riddick, Imam (Keith David) and the girl known as Jack (Rhiana Griffith) are picked up by a gigantic mercenary spacecraft. Riddick tries to conceal his identity, but the mercenaries quickly voice-print and identify him. Now captured by the mercenaries, the trio of survivors discover that their captors have some unusual plans for them. 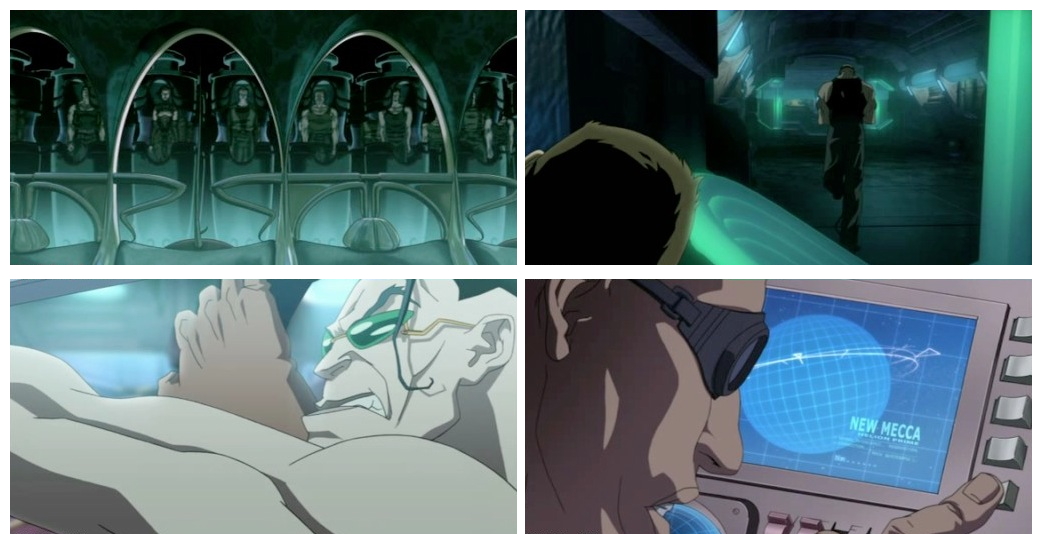 The ship’s owner, Antonia Chillingsworth (Tress MacNeille) collects criminals whom she freezes and keeps as statues that are, in her view, art. Although they are frozen, they are still alive and conscious, and she envisages Riddick as the ultimate masterpiece in her collection. Riddick, Jack, and Imam must fight their way through the army of humans and aliens at her disposal or else meet a fate crueler than death. Riddick’s old nemesis, bounty hunter Toombs (Nick Chinlund) and his mercenaries (who have been kept cryogenically frozen until needed) are also released to capture Riddick. Eventually Jack discovers her violent side by shooting Chillingsworth in order to save Riddick. This discovery is clearly a source of worry for Riddick and Imam as the three escape from the mercenary ship. Riddick decides to deliver both Jack and Imam to a watery planet called New Mecca, where they should be safe. 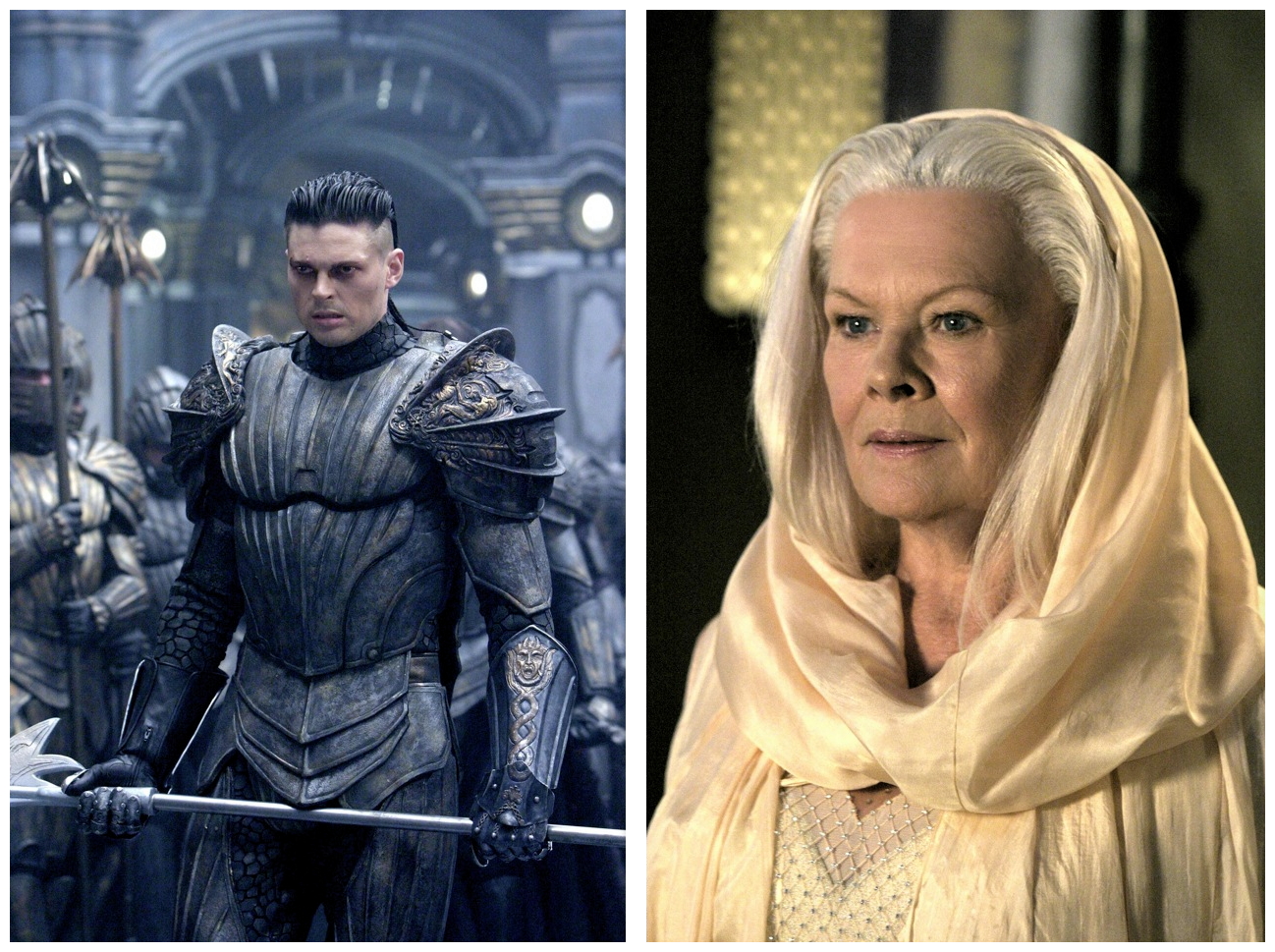 So concludes the animated short film, which brings us to our main feature for this evening, The Chronicles Of Riddick, set in the year 2583: Our anti-hero has been hiding out for five years, evading bounty hunters and mercenaries sent to capture him. After killing a crew led by Toombs and stealing his ship, he takes off for the city of New Mecca on the planet Helion Prime, where the bounty on his head originated. Riddick is reunited with Imam, who believes Riddick is a Furyan, a race of warriors long thought extinct, and believes that Helion Prime will be the next planet to be conquered by a mysterious force crusading across the stars. Aereon (Judi Dench) the Elemental identifies the army as Necromongers, religious fanatics who seek to convert everyone and kill those who refuse. The Necromongers attack, and take control of the capital in a single night. In the battle, Imam is killed and Riddick escapes. The next day, the Necromonger high priest known as the Purifier (Linus Roache) forces the populace to convert, except for Riddick, who kills the soldier who killed Imam. 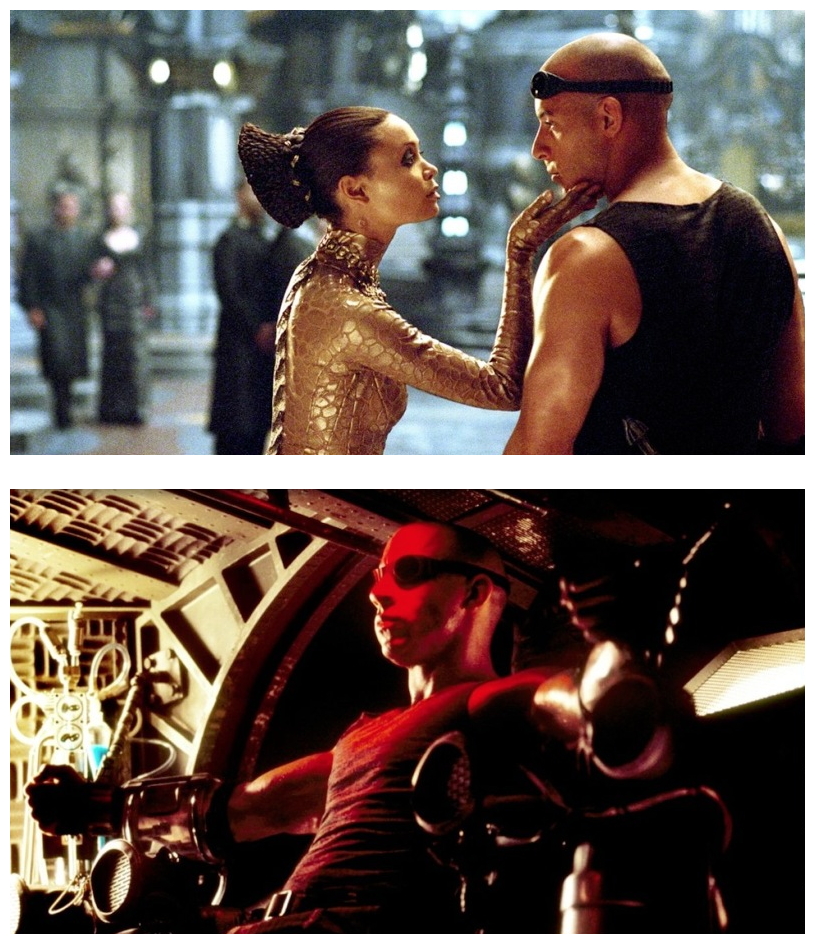 Intrigued, the Lord Marshal (Colm Freore) orders Riddick be scanned by the telepathic Quasi-Dead who determine that he is indeed a Furyan survivor. The Lord Marshal immediately orders Riddick to be killed, but he escapes only to be recaptured by Toombs. Riddick is taken to Crematoria, a harsh underground prison planet, where Jack is also being held. The Lord Marshal sends Commander Vaako (Karl Urban) to hunt Riddick down. Vaako’s wife (Thandie Newton) speaks to Aereon, who reveals that Furya was devastated by the Lord Marshal after he was told a child from that planet would kill him. The Vaakos now understand why the Lord Marshal wants Riddick dead, as he may be the child of the prophecy. On Crematoria, a disagreement breaks out between Toombs and the prison governor (Yorick van Wageningen) over Riddick’s bounty, and the governor assumes – correctly – that Toombs has stolen a prisoner from the Necromongers. Meanwhile in the prison, Riddick finds Jack, now known as Kyra (Alexa Davalos), and they eventually reconcile. 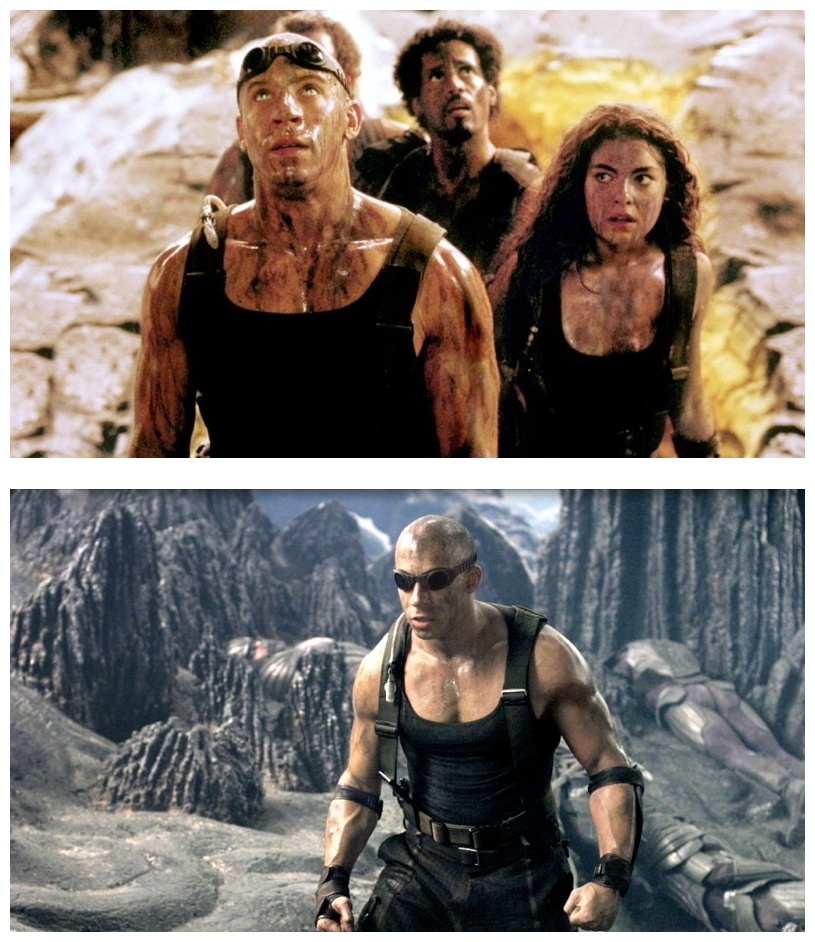 The guards kill the bounty hunters, take the reward money and prepare to leave before the Necromongers arrive. Riddick leads several prisoners across Crematoria’s volcanic surface to steal the ship. The guards and the prisoners eventually reach the hangar only to discover that the Necromongers got there first. All of the guards are killed in the chaos and Riddick is incapacitated by Vaako. With the approach of the 700-degree sunrise, Vaako leaves Riddick to die and takes Kyra to be reconditioned. However, Riddick is saved by the Purifier, who tells him that if he stays away from the Necromongers, the Lord Marshal promises not to hunt him. The Purifier then reveals that he too is a Furyan and encourages Riddick to kill the Lord Marshal, then commits suicide by walking out into the scorching heat. Vaako reports Riddick dead and is named heir apparent by the Lord Marshal, and Riddick flies back to Helion Prime using Toombs’ spacecraft. 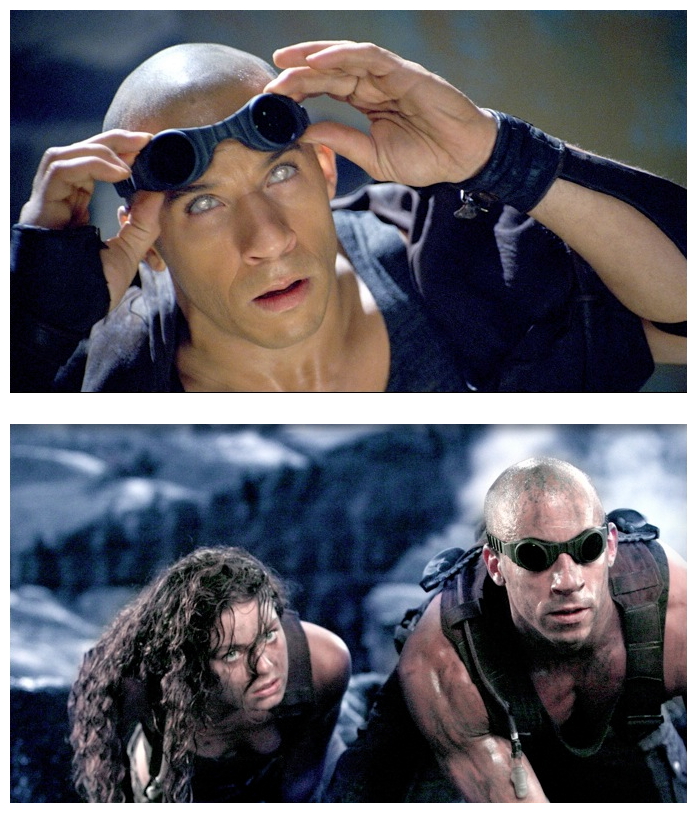 Riddick infiltrates the main hall, and Dame Vaako spots him, but encourages her husband not to warn the Lord Marshal, but to let Riddick strike first and pave the way for Vaako to kill the Lord Marshal and take his place as leader. When Riddick attacks, the Lord Marshal presents Kyra, who appears to have been converted. Riddick fights the Lord Marshal one-on-one in front of his army, who prevails with his supernatural powers. When it appears that Riddick is about to be killed, Kyra stabs the Lord Marshal in the back with a spear. The Lord Marshal responds by punching her into a column of spikes, mortally wounding her. Vaako attempts to strike the wounded Lord Marshal, but misses, and the distraction provides Riddick with the opportunity to deliver a killing blow. The film ends with Kyra dying in Riddick’s arms just before the Necromongers, including Vaako, kneel before Riddick as their new leader. “Long live Flash. You’ve saved your Earth. Have a nice day.” 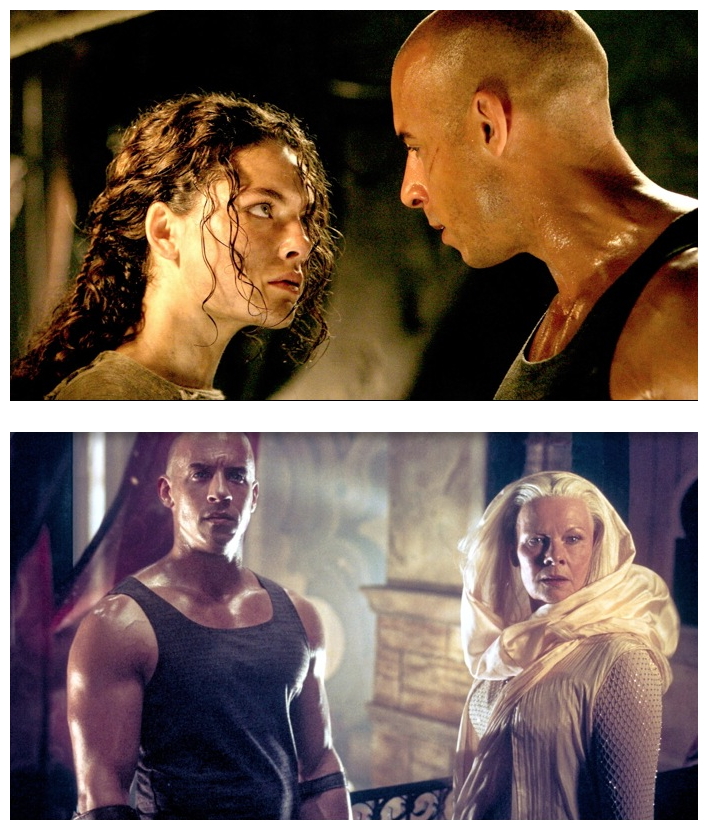 Although terribly complex in its telling, the story is essentially Flash Gordon (1980) with Dune (1984) sensibilities, populated by single-environment planets (snow, water, desert, volcanic, ultra-violet, etc.) and Riddick representing the last of his race, refusing to bow to the Lord Marshal and his army who, just like Ming The Merciless, intend to conquer the entire universe by dominating one world at a time. Speaking of Dune, also present is a Bene Gesserit-like race called Elementals, although we meet only one of them. Don’t get me wrong, I’m not complaining, I actually enjoy such genre hybrids. It is becoming so difficult to come up with original concepts nowadays, it seems like all the various formulae have already been tried and tested. I appreciate a filmmaker who, when working with his own material, can be audacious enough to throw in a few ingredients from his childhood here and there. If you can’t be original, at least have fun doing it. Like Pitch Black, The Chronicles Of Riddick barely scraped its money back at the box-office, but became an instant hit once released on DVD. 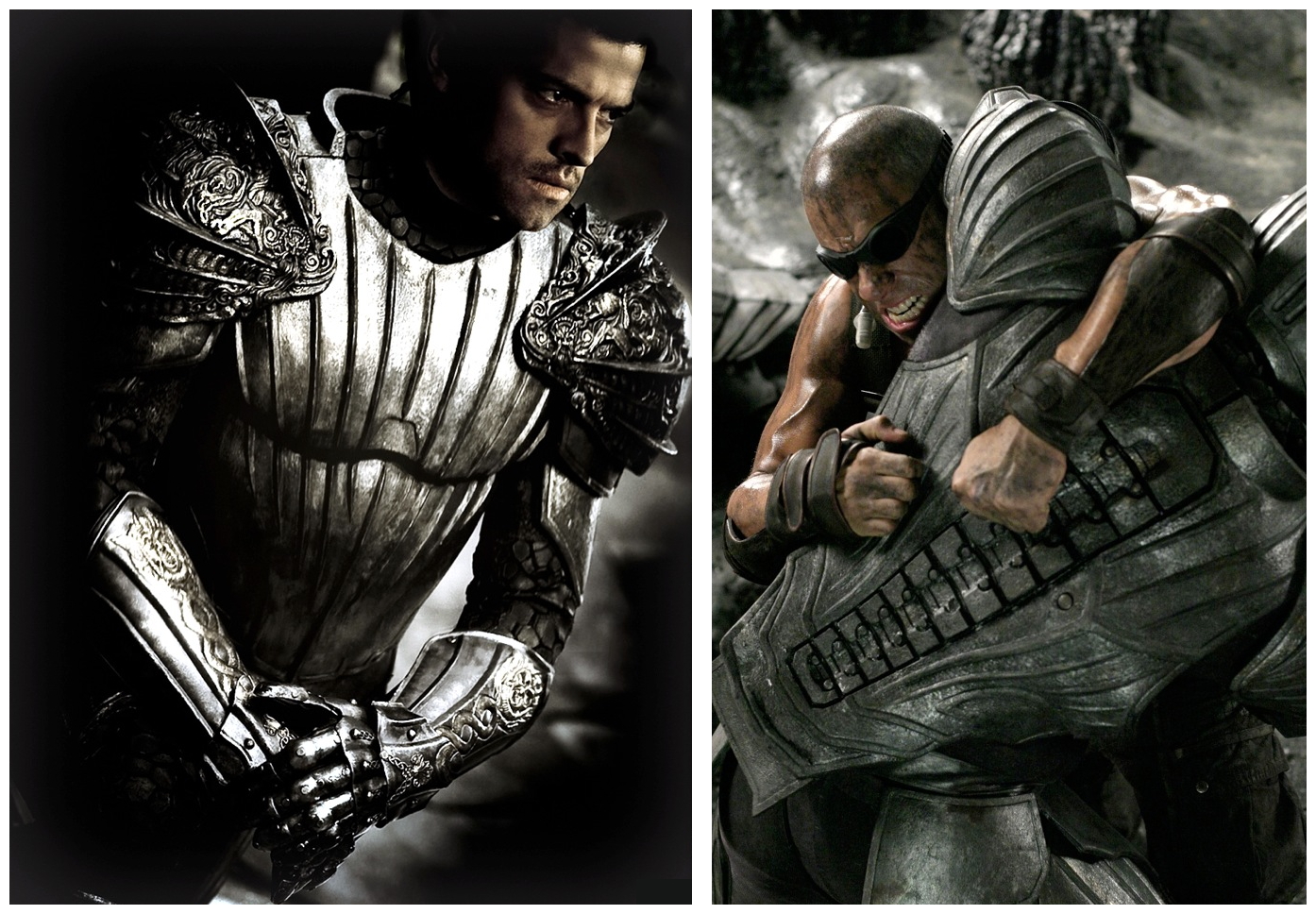 There are three versions of the film available: the theatrical cut is rated PG-13; the Director’s Cut is unrated; and the third version, assembled for television viewing, has some but not all of the added footage from the Director’s Cut. For instance, the minor subplot of Riddick’s visions, as well as his moments with Toombs’ second in command, are both absent but the ending from the Director’s Cut is present. There was a cry from fans wanting to see more of Riddick’s survival/murder skills, resulting in another sequel simply entitled Riddick (2013): Dissatisfied with his role as Lord Marshal, Riddick attempts to find Furya, but is instead abandoned on a desolate planet. After spending some time on this world, Riddick finds that he will soon be overtaken by a vicious storm that provides cover for countless predators. 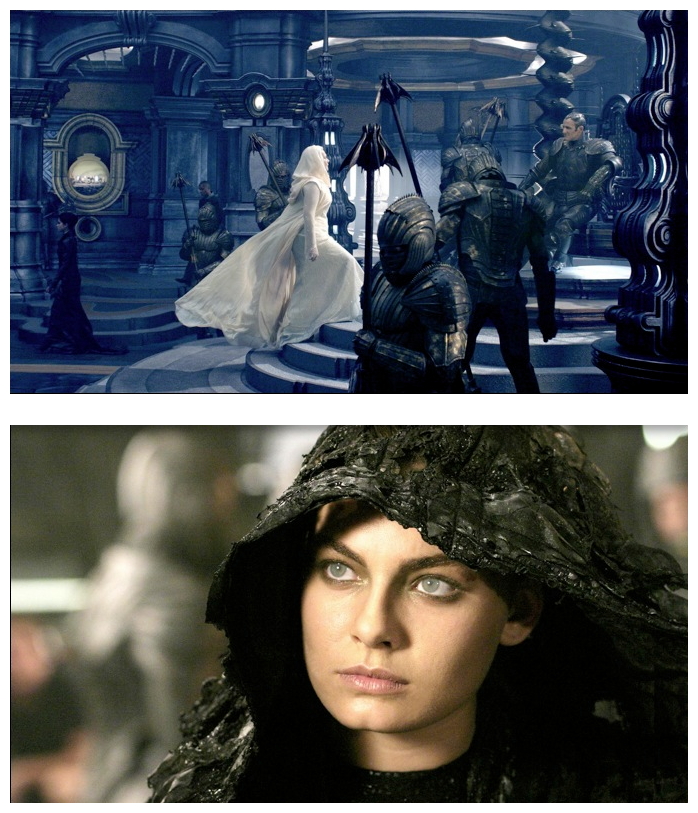 Using the communication system from a mercenary outpost, Riddick lures two ships to the planet, intending to take one of their ships, but the plan is complicated when one of the arriving mercenaries turns out to be the father of an old enemy. Riddick establishes a deal with the mercenaries using the approaching storm to force cooperation while surrounded by enemies and nearly being killed, but that’s another story for another time. It’s vitally important that you join me for next week’s edition of Horror News, because a man from the future told me that if you don’t read all my reviews from now on, the entire world would be devoured by an enormous mutant Star-Goat. Normally I’m highly skeptical of such claims, but he seemed so certain, I feel we’d best not take the risk. So enjoy your week, and remember, the survival of the entire world depends on you. Toodles! 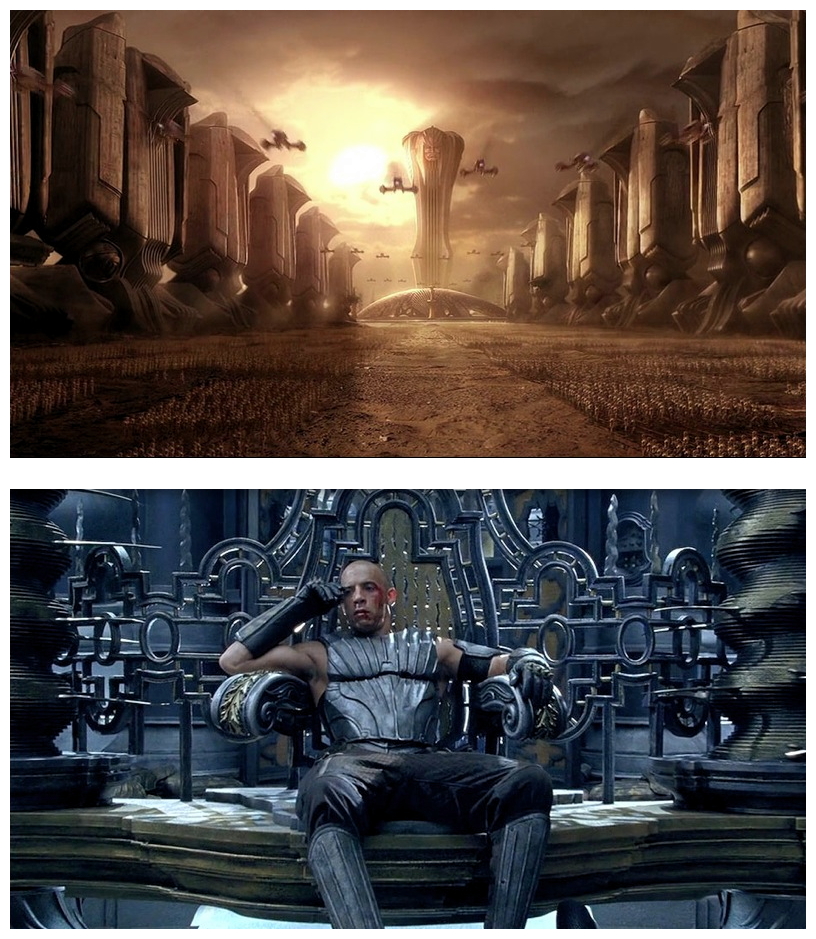