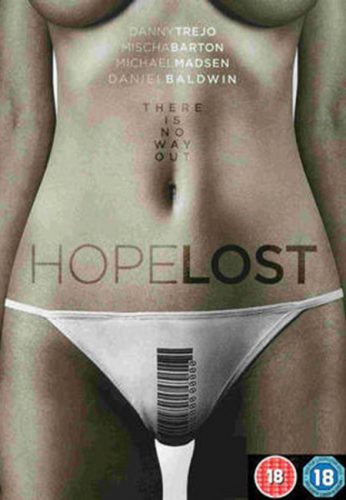 When prostitution becomes her life she also finds a magic lamp. Her wishes? Well let’s just say mankind has no chance.

Ah, the titillations and disappointments in the world of exploitation cinema. There’s almost nothing better, and at the same time worse, in the whole movie world. The eye-catching posters and amazing cover art and scary titles that go along with some of the most bland, plotless, poorly made disasters ever put to film (or video). And the thing is, they got us all – every one of us horror fans can remember seeing the cover art on a DVD or VHS tape at the rental store, and the crazy film stills and plot descriptions on the back, and trying to decide if the movie itself could possibly live up to what we imagined it might be like. It was a gamble, a fun one that only cost us a couple bucks when it went bad, and when we won, it was great, in some cases life-changing. I say all this to introduce the best deception in exploitation advertising I’ve seen in quite some time: Hope Lost.

Let’s start with the movie poster: the one I’ve found most often features the torso of a topless woman wearing only small, white panties. There is a bar code along the underside of the panties, and the top of the poster cuts off the figure in the same way as the shirt the woman is wearing on the cover of Ween’s Chocolate and Cheese album, exhibiting plenty of underboob. That woman is not in this film, but that’s not the point anyway – it is meant to grab attention, and it no doubt grabs quite a bit. More impressive is the synopsis given on IMDb: “When prostitution becomes her life she also finds a magic lamp. Her wishes? Well let’s just say mankind has no chance.” That isn’t Hope Lost – there is no magic lamp, real or metaphorical, nor is there some kind of wish or intention ever displayed that would give mankind a reason to fear. And we can’t forget about the “star power” this film touts: Danny Trejo, Mischa Barton, Michael Madsen, and Daniel Baldwin, none of whom play any of the main characters (Madsen does play the bad guy, in his “I’m playing the character of Michael Madsen” kind of way we all know, but his time on screen is fairly limited). The worst part about all of this, the reason the false advertising is unfortunate in this case (and many others), is that it is being done to grab a wider, more mainstream crowd, not a crowd that will actually appreciate the film.

Hope Lost is actually about a young Romanian girl named Sofia (Francesca Agostini) who meets a movie producer named Gabriel (Andrey Chernyshov) at a club and accepts his offer to become a star. He drives her to Rome and is very respectful of her, making her feel safe and comfortable. When she wakes up in the morning, Gabriel is gone, but a stranger (Fabian, played by Diego Pagotto) walks in and grabs her and introduces her to Manol (Madsen), a sadistic, drug-addicted pimp who explains to her that Gabriel owed him a lot of money, and paid him with her. Suddenly, Sofia finds herself pushed into prostitution with constant threats against her family if she should try and get away. Along the way, she meets Marius (Trejo), who works security for Manol, as well as Alina (Barton), a fellow woman pushed into prostitution who helps her along the way.

Here’s the problem: I feel fairly confident that this movie would have been much better had it skipped the “star power” and just told its story, and would have done better with an audience that would actually appreciate it had it been more accurately described. Madsen is yet again playing Mr. Blonde from Reservoir Dogs. When Danny Trejo has a small role in a film, it’s kind of always the same character: the muscle, the tough guy. I swear Mischa Barton played this exact same role in an old episode of Law and Order: SVU, which I suppose means that she could do the part, and Daniel Baldwin’s character, Ettore, could have been played by almost anyone to the same effect. The strong parts of the film aren’t any of these big names, but rather Francesca Agostini as the protagonist, Sofia, and Alessia Navarro as Eva, a mysterious woman who picks Sofia up and seems to have a thing for her, paying her extra for increasingly bizarre requests. Actually, Eva is the best character in the film, hands down, as she manages to surprise us nearly every time she appears on screen. 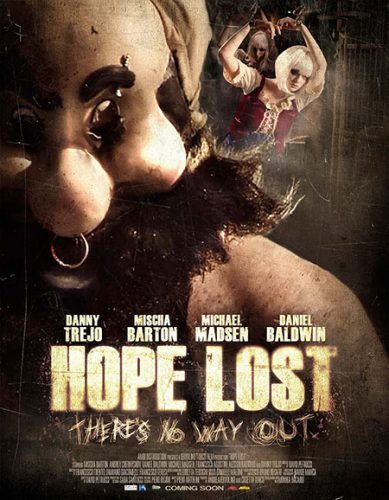 Hope Lost is an Italian production, directed by David Petrucci and written by Jack O’Mellow, Francesco Teresi, Loretta Tersigni, and Francesco Trento. There are occasional suspenseful or upsetting things going on in the first three-quarters of the film, but everything culminates into a brutal and surprising, if not slightly rushed, finale, one that I urge anyone to stick around for. There have been quite a few films of this type, showing the life of a young girl upturned when she is sold into captivity – Thriller: A Cruel Picture being probably the most recognizable of the bunch – so there are a lot of pieces of this story that we’ve seen in other shapes and forms before, but it is the finale that really makes Hope Lost worthwhile. This isn’t really a revenge film, nor is it wall to wall blood and boobs (despite what the poster and the subject matter might indicate). If you don’t go in to this expecting Machete or anything special from the big names, but instead looking for a variation of a familiar story, I don’t think you’ll be disappointed.