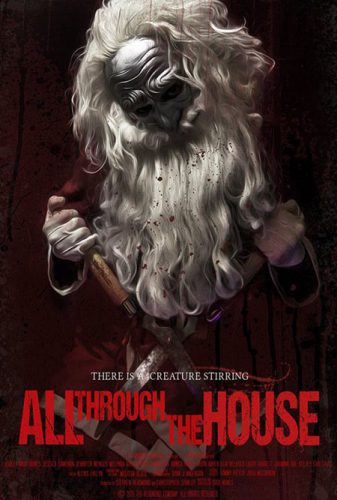 A deranged masked Santa-Slayer comes to town for some yuletide-terror. He leaves behind a bloody trail of mutilated bodies as he hunts his way to the front steps of the town’s most feared and notorious home.

Now we’re talkin’! Just in time for Christmas, an evil Santa Claus movie, one of the most underappreciated subgenres of horror movies. As most of you already know, within that subgenre there are two sub-subgenres. The first is “actual evil Santa” (“Santa Slays” “Krampus”) which there has been a glut of lately. And the second is “crazy dude dressed like St. Nick.” (“Silent Night, Deadly Night”) “All Through the House” is the later, and bless it’s heart for that fact.

We start with a cold open set in a young couple’s home on Christmas Eve. Their romantic holiday evening is quickly ruined by the previously mentioned evil Father Christmas. After that, we cut to our heroine, Rachel (played by Ashley Mary Nunes). After checking in with her drunken, foul-mouthed granny (one of the best characters in the movie) Rachel heads out for a night on the town with her two awful friends who are trying to reconnect her with her stalker ex-boyfriend played by Jason Rayer. 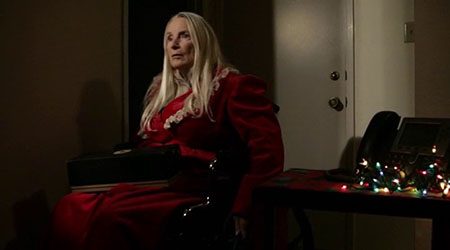 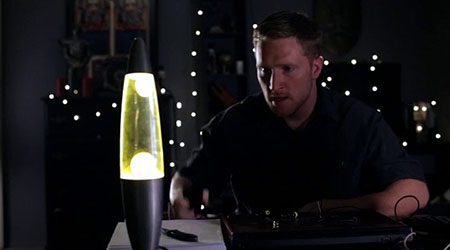 Eventually, the trio ditches that creep to go help Rachel’s lonely neighbor, Mrs. Garrett, decorate for the holidays. Mrs. Garrett is a wee bit unhinged, but she seems to the girls like a sweet enough old lady. Rachel and her pals must not be aware they’re in a horror movie. While this is all going on, evil Kris Kringle is spreading cheer all over the neighborhood.

“All Through the House” is a fun horror-comedy. I enjoyed it from beginning to end. How could I not love a movie that has multiple shots of severed penises? You can tell the filmmakers are having a blast, and that’s infectious.

It’s by no means a masterpiece, though. For one thing, the plot is pretty by the book. If you can’t figure out the identity of the killer within the first 15 minutes, you may have brain damage. Seek medical attention. Also, some of the supporting performances are subpar. 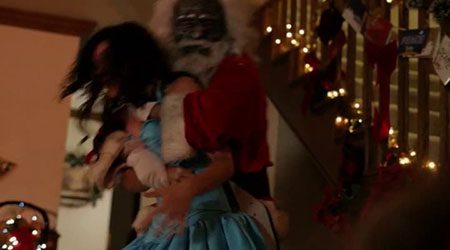 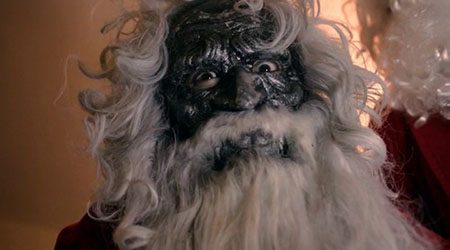 But I don’t want to talk about that. There’s too much good stuff. First and foremost, there isn’t a single bit of CGI in the whole thing. The quickest way to my heart is with corn syrup and latex. Josh McCarron and his FX team deserve all the credit in the world. Their effects are well-crafted and engaging, and the kills are pretty original. If that was all the movie had done well, that would have been enough, but the filmmakers don’t stop there.

The set design is also first-rate. The whole film is filled with bright greens and reds. That certainly helps establish that the movie is set during Christmas, but it also creates a nightmarish Wonderland feel. On top of that, the costume design helps give each performance character. Unlike most slasher movies, it’s easy to tell who’s who. After reviewing several sloppily-made movies recently, that attention to detail is a godsend. 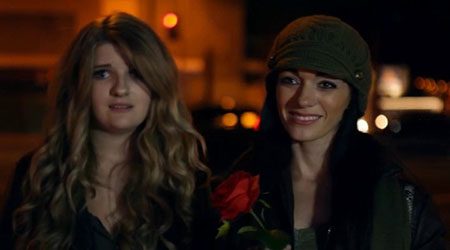 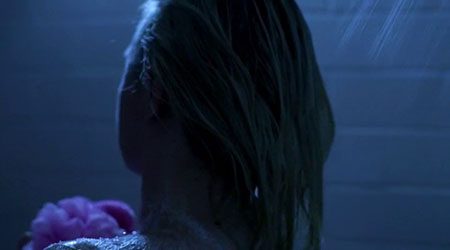 That brings me to the editing and pacing. The movie gets right to the action and never lags. It even nails the little moments. For instance, what could have been boring exposition scenes are made interesting with unconventional cuts between the characters talking and by jumping to shots of the killer doing his thing. Also, while the movie is mostly a comedy, there are several jump scares that are effective thanks to the editing.

None of it would work, however, without a good director bringing it all together. Todd Nunes is the real deal. With a modest budget, he has been able to make a funny, entertaining horror-comedy that looks like it had twice the budget it actually did. You can tell he’s studied some of the greats, especially Joe Dante. “All Through the House” has more than a passing resemblance to “Gremlins.” There’s other movie references sprinkled throughout that horror fans will have fun catching. This movie has rewatch potential. 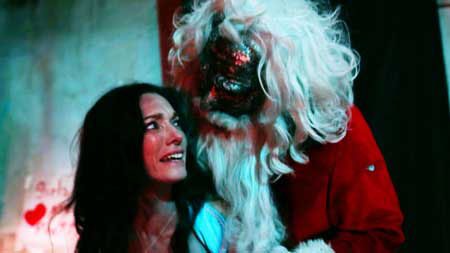 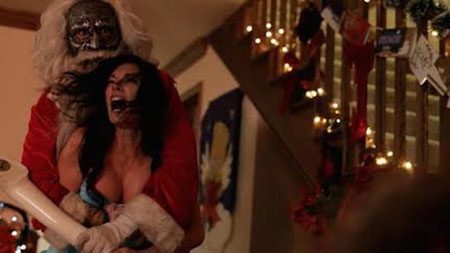 In summary, “All Through the House” may not be reinventing the wheel with it’s plot, but it doesn’t matter. It’s fun, well-made, and worth your time.