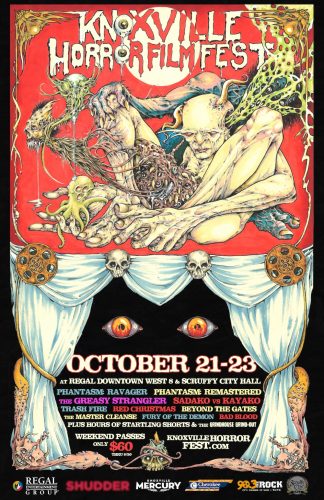 Dedicated to bringing the genre film festival experience to East Tennessee, KHFF 2016 will once again showcase a weekend’s worth of premier indie horror features and startling short films from around the world, in addition to parties, special guests and other fun.

This year’s lineup is headlined by ten feature films, each preceded by a selection of shorts:

KHFF 2016 programming will run Friday night and all day Saturday at Regal Cinemas Downtown West 8, then all day Sunday at Market Square’s Scruffy City Hall.  Further details will be announced through September, with the festival schedule and full slate of short films to follow in October.

KHFF will also host a free KHFF8 PREVIEW NIGHT on October 6 at Scruffy City Hall, featuring trailers & shorts teasing this year’s festival plus the premiere of locally-produced horror feature Something’s in the Woods, based on a trailer created for the first Grindhouse Grind-out contest in 2009. And on Thursday, October 20 horror fans are invited to warm up for KHFF with the KNOXFERATU silent film celebration at Scruffy City Hall, featuring The Unknown (1927), Nosferatu (1922) and more.

Submissions for this year’s Knoxville Horror Film Fest remain open through September 29 via FilmFreeway.com, with special discounts for films produced in Tennessee. Knoxville-area filmmakers are also invited to compete in the Grindhouse Grind-out contest (kicking off September 30) which gives teams six days to produce their own horror themed short film or trailer for competition during KHFF’s main event on Saturday night. Registration information & more can be found on the KHFF website.

ABOUT THE KNOXVILLE HORROR FILM FEST:

Founded in 2009 by genre enthusiasts William Mahaffey and Nick Huinker, Knoxville Horror Film Fest has grown from a single night program at Knoxville’s Pilot Light to a multi-venue, weekend-long event known for its expert curation and endless entertainment value. Over the course of eight festivals and countless standalone events, KHFF has presented hundreds of short films by up and coming filmmakers and strived to bring the best in current and classic horror cinema to fans who value the theatrical experience. For more information, visit KnoxvilleHorrorFest.com