The Shriekfest Film Festival, an international horror/sci-fi film and screenplay competition, has announced the 3 more of its 2016 feature film lineup. Film festival director Denise Gossett says “We have a wonderfully diverse selection of amazing films from all over the world.”.

The feature films selected thus far are listed below:

The festival will also showcase 42 outstanding and diverse international short films, covering just about every aspect of horror, sci-fi, and fantasy.

The Shriekfest Film Festival runs October 6 – 9, 2016. An opening night party will take place at Club Sinister in Hollywood; the rest of the festival will be at the iconic Raleigh Studios on Melrose Blvd.

Shriekfest, now in its “Sweet 16th” year, was created in July 2001 by Denise Gossett and has grown into the longest-running and one of the largest horror and sci-fi film festivals in the country. Since its inception, Shriekfest has offered young and upcoming writers, actors, and producers a chance to have their work screened and rated by peers. 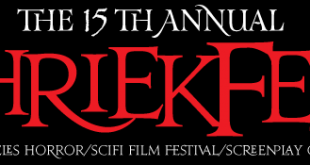