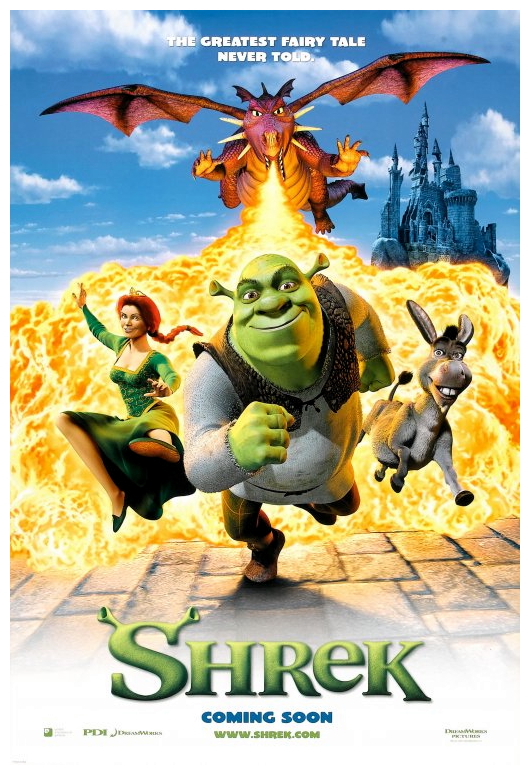 SYNOPSIS:
“A big green ogre and a talking donkey set off to rescue a beautiful princess from a dragon. This computer-animated feature pokes good-natured fun at fairytale conventions even as it revives them, building toward the inevitable happily-ever-after ending. The spirit of Looney Tunes is present in every scene, and laughs are loud and frequent.”

REVIEW:
There are many positive things I could say about Shrek (2001): the best revisionist fairytale since The Princess Bride (1987); a post-modernist triumph; the best film of 2001; grossed US$200m within two months; Oscar for Best Animated Feature; blah, blah, blah. Those things are all certainly true, but they miss the point. When you get right down to it, Shrek is just a touching story of a boy and his donkey – a big green ugly boy and his smart-mouthed stubby-legged donkey named Donkey. In fact, Shrek is deceptively complex and milks a lot of its laughs by taking a familiar concept and playing it out to some hilarious level of absurdity. It’s not enough to have just a couple of fairytale characters. No, this fairytale has to round up virtually every fairytale character you can think of (from Little Red Riding Hood and Pinocchio to Snow White and the Gingerbread Man), do some clever twist on each of them and then move them all to a ‘relocation camp’ as part of the plot. It plays a lot funnier on the screen than it does in text. 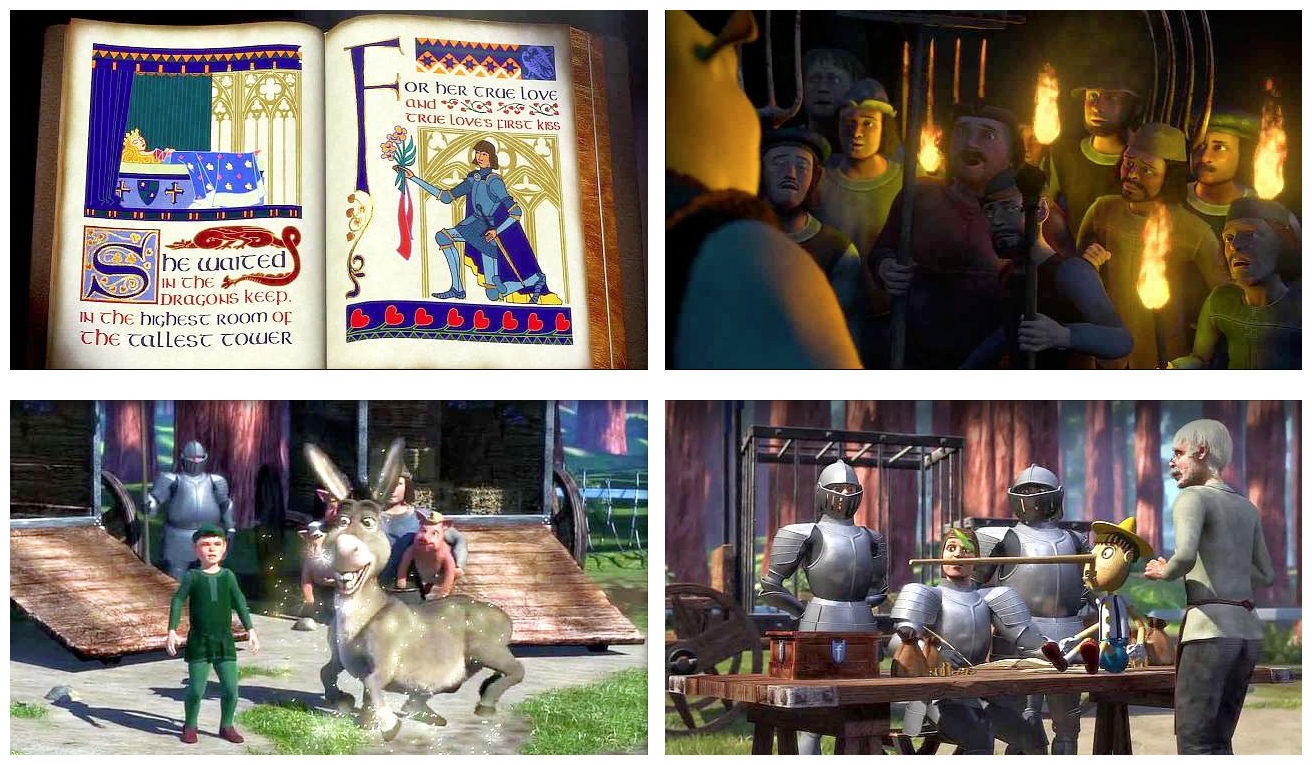 It has a dragon, but this one is a great big lady dragon who has more on her mind than just guarding some stupid princess. As for that princess, well, I don’t want to give anything away, right? But let’s just say she’s quite complicated and, at the centre of all this is an ogre who (unlike your traditional malevolent ogre-type monstrosity) pretty much just wants to be left alone in his swamp to take mud-baths and fart. Based on the children’s book Shrek! (published 1990) by veteran New Yorker cartoonist William Steig, the computer-generated blockbuster was a simple fairytale, if a little skewed. Take one grouchy ogre in a desolate swamp, foist a boat-load of homeless fairytale characters into his domain, add a fast-talking freeloading donkey and the diminutive Lord Farquaad (who instigates the swamp invasion while cleansing his magical kingdom of Duloc) and the story becomes a classic quest. Shrek strikes a bargain with Farquaad to rescue the lord’s beloved Princess Fiona from a fire-breathing dragon in return for his peaceful homestead. 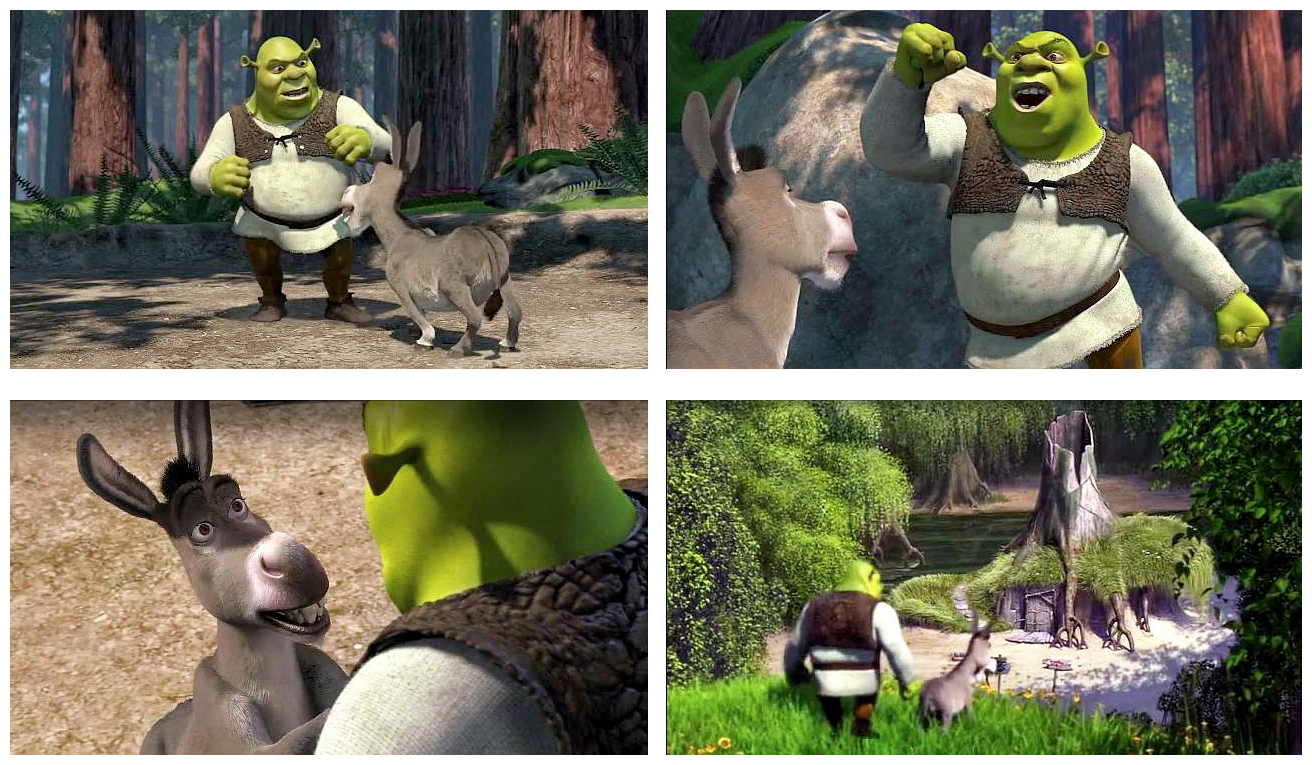 The resulting adventure not only tests the ogre’s mettle, but ultimately leads him to fall in love and challenge his preternaturally grizzly nature. Shrek’s colourful characters, gross humour and action plot appealed to children, while its refreshingly humanistic themes and sly parodying of genre icons amused and surprised older viewers. The movie’s triumph was the latest in a string of animated successes for DreamWorks co-founder and animation guru Jeffrey Katzenberg, coming hot on the heels of Antz (1998), DreamWorks’ inaugural computer-generated feature. Early concept work for Shrek, however, began in 1996 when producer John H. Williams presented the idea to Katzenberg on the advice of his kindergarten-aged child. The project first took shape as a hybrid live-action/stop-motion/computer-generated vehicle for Saturday Night Live comedian Chris Farley. Although Katzenberg reacted enthusiastically to the tests, the miniatures approach was finally deemed impractical in light of other resources at hand. 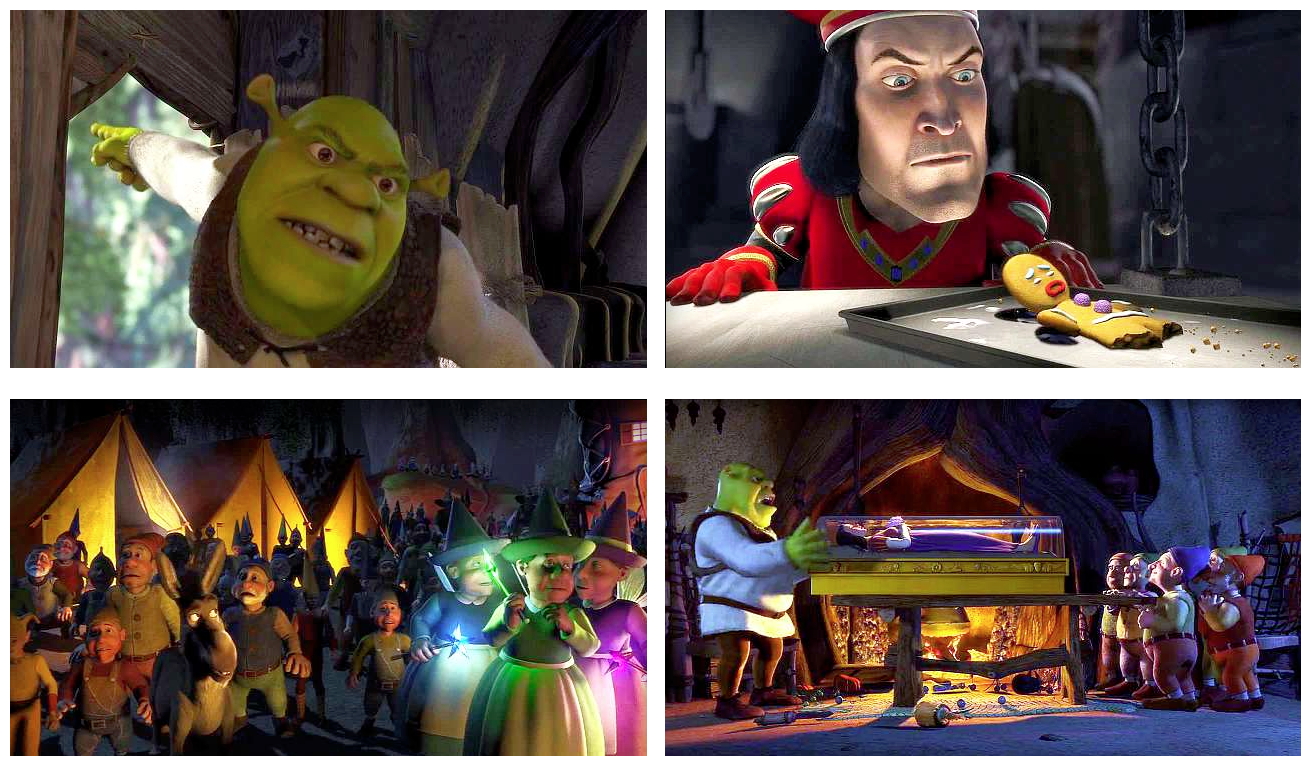 Co-director Andrew Adamson: “Using miniature backgrounds was totally feasible. What you get for free with miniatures is texture, atmosphere, shadows, dust – so we thought it would get us there quicker. In retrospect, going all-CGI was a good decision because it allowed us to include a lot more life in our backgrounds – moving trees, moving grass – which is hard to do in miniature.” With the miniature approach set aside, the project underwent a change of guard. A tragic blow came in December 1997 when Chris Farley died of a heart attack at the terrible young age of 33, and Katzenberg was forced to consider his options, including re-casting. Long before the script was finalised Katzenberg started to secure vocal talents for the production, casting Eddie Murphy as Donkey and Cameron Diaz as Princess Fiona, with John Lithgow at his Shakespearean best as Farquaad. 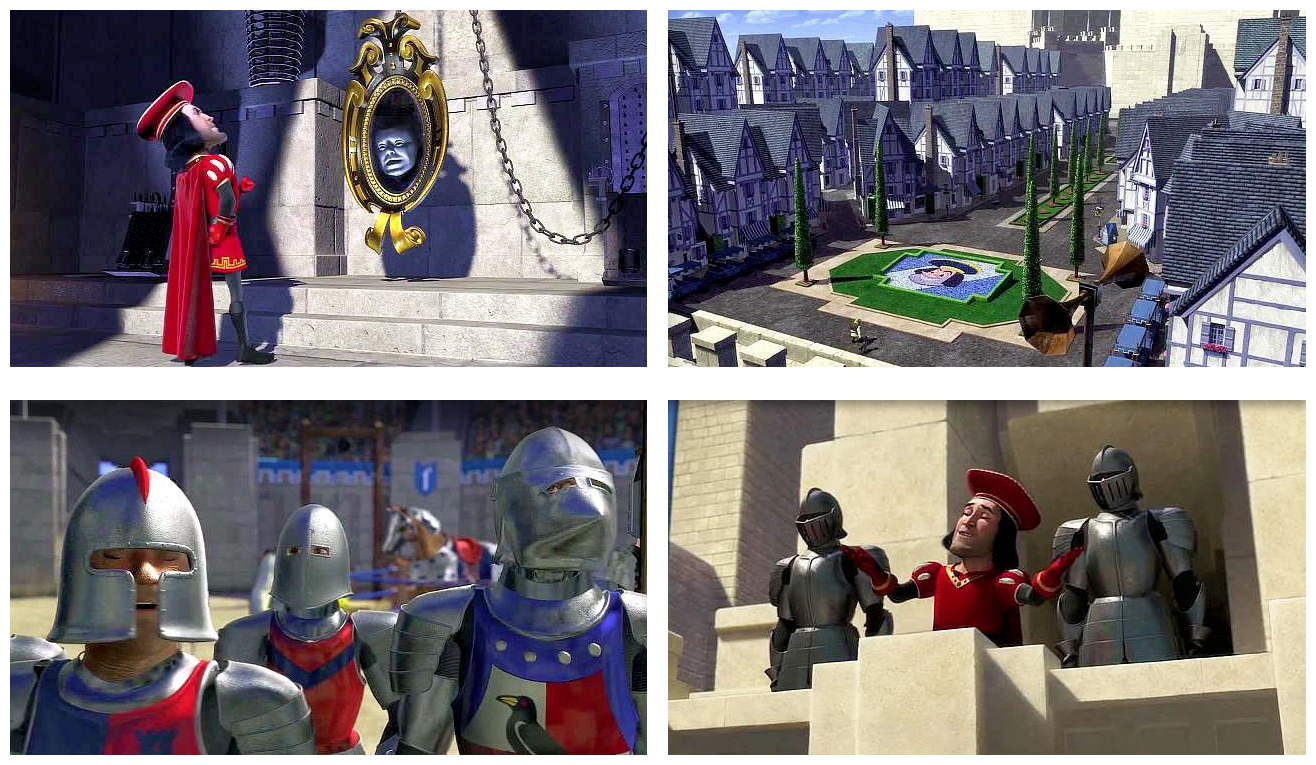 The task of filling Chris Farley‘s shoes as Shrek fell to fellow Saturday Night Live veteran Mike Myers. “Mike fell in love with the theme of the movie and he really helped us in developing the character. Eddie was more of a known quantity in his characterisations, coming from his amazing work in The Nutty Professor (1996) but, with Mike, we knew he could become a wide range of different types, as we’ve seen in his Austin Powers (1997) movies. So we went into the studio and started playing. Mike did one voice for Shrek for a while, then realised it was the wrong way to go, so we re-recorded about twenty minutes of the movie that we had already done. It was very much an evolution.” There was a rumour that the look of Shrek was based on the 1940s professional wrestler Maurice Tillet aka the French Angel, but DreamWorks are quick to dismiss this idea. All the main characters are based on the actors who provided their voices, which is why Shrek looks like Chris Farley but sounds like Fat Bastard. 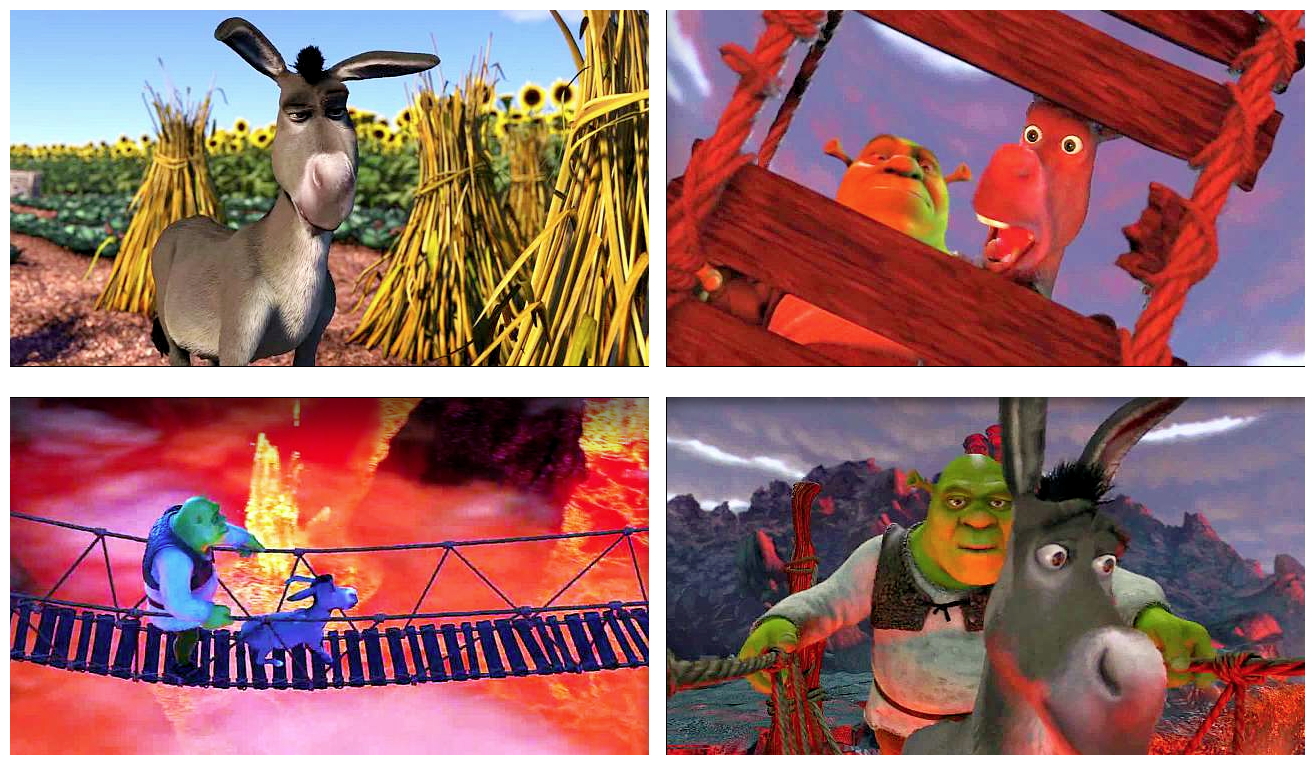 Many of the supporting characters were voiced by the CGI artists themselves: Mike Myers, Simon J. Smith and Christopher Knights played the three blind mice; Knights also supplied the voice of Thelonious; Conrad Vernon was the Gingerbread Man; Chris Miller played both Geppetto and the Magic Mirror, and Cody Cameron was Pinocchio and all three little pigs. As the structure of the movie emerged, they began to pool visual references ranging from Victorian fairy paintings to storybook illustrations, including the art of Edmund Dulac, Grant Wood, N.C. Wyeth and Adolf Hitler‘s favourite architect Albert Speer. The kingdom of Duloc becomes a humorous and pointed example of an environment designed to reflect a character’s personality, its giant thrusting towers evidence of the tiny Lord Farquaad’s insecurities, and its squeaky-clean cobblestoned streets jabs at the popular theme-park packaging of fairytales. So there’s a lot going on here, to say the least. But underneath all the storybook satire, poking fun at Disney and rapid-fire punchlines there are some very simple reasons why this movie is so good: 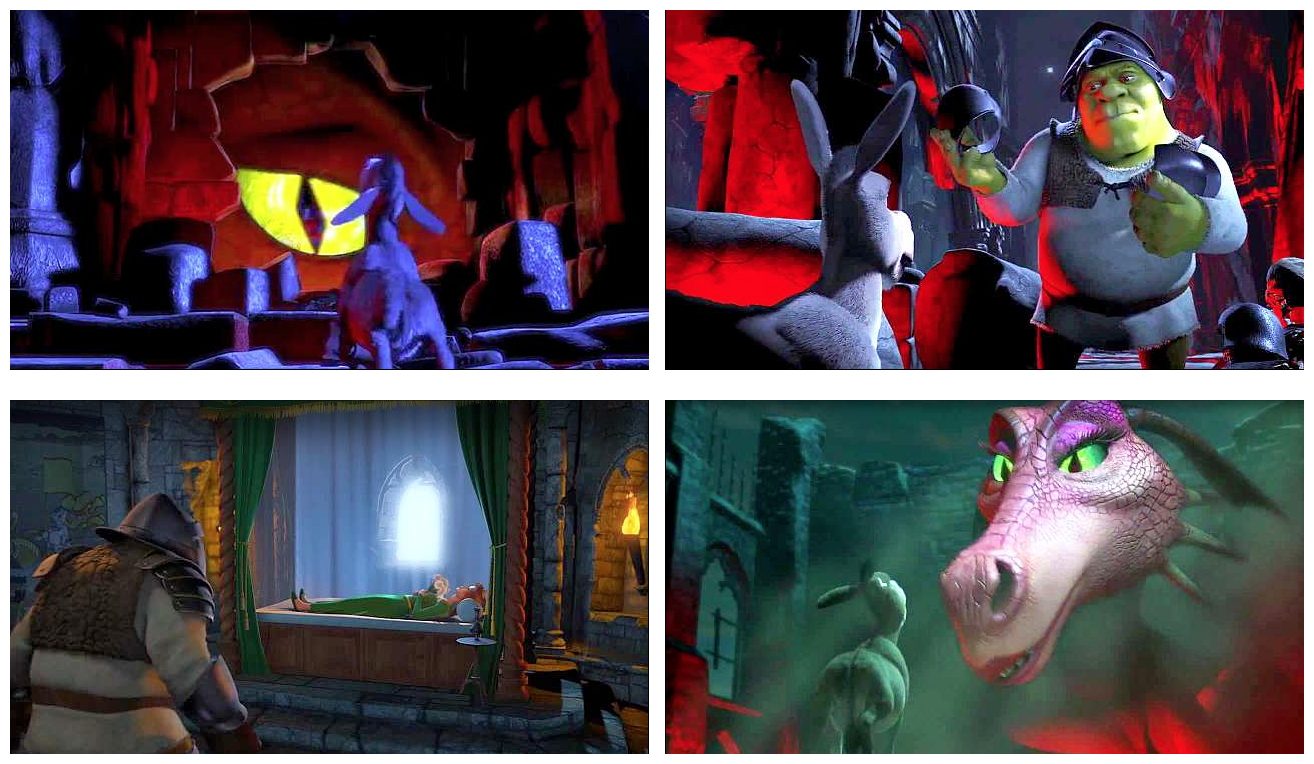 1. Its cartoon characters are more interesting and better developed than 95% of live-action Hollywood films this century.

2. It has that mysterious quality that all good movies have, to suck us in to an age-old story (heroic questing, princess rescuing, falling in love, etc.) by making us feel like we’ve never seen it done quite like this before.

3. Eddie Murphy hasn’t been this funny since the eighties. Mike Myers is great as Shrek but, as the neurotic Donkey, Murphy conjures laughter every time he opens his mouth. Whether he’s rattling on about needing therapy, mastering staircases or making waffles, he’s a computer-generated riot.

4. The animation is definitely different. You might think it was revolutionary for its time, but chances are you won’t notice it all that much anyway. Like any good animated film, it’s sometimes easy to forget that what you’re watching was generated by computer. 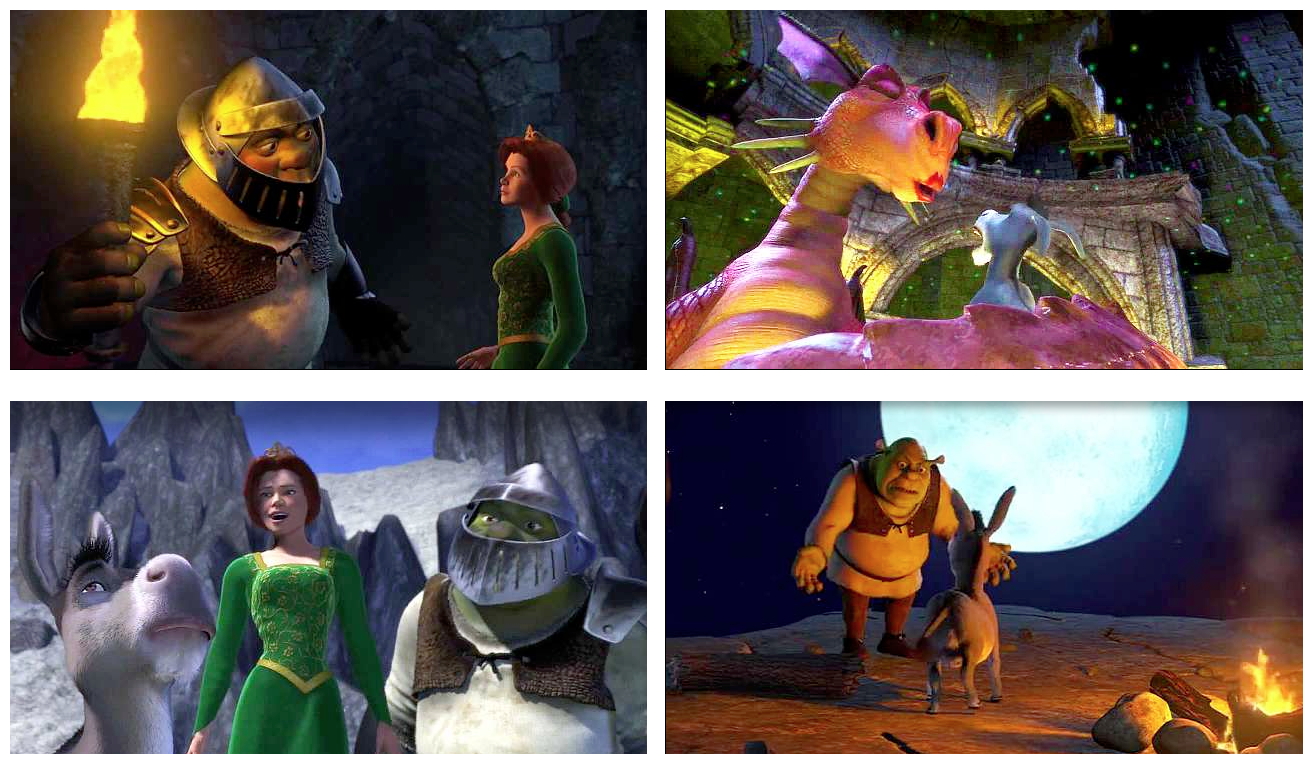 The two-disc DVD I viewed looked great, and the transfer on both the 4×3 and widescreen versions is terrific. There is an additional three minutes of footage that isn’t actually in the movie itself, but tacked on as an extra bit at the end. It’s still dead-on though and doesn’t feel out-of-place at all, a karaoke medley that has the animated ogre and his friends sweatin’ their digital bits to the hits. Particularly amusing are Donkey’s swank take on Baby Got Back, the princess writhing to Like A Virgin, and flamboyant Robin Hood belting out YMCA. There’s just a few seconds for each song, of course, but that’s all that’s needed, and the joke builds from the sincere and sweet ballad Shrek serenades his sweetheart with, up to the Gingerbread Man singing Do You Really Want To Hurt Me? There should have been more of this type of humour in the bonus material – not necessarily more footage, since you can only expect so much from a cast and animators (even a short bit like this no doubt took a massive amount of time and energy) but more of the clever, irreverent spirit that draws on the same elements that made the movie the surprise hit of 2001. 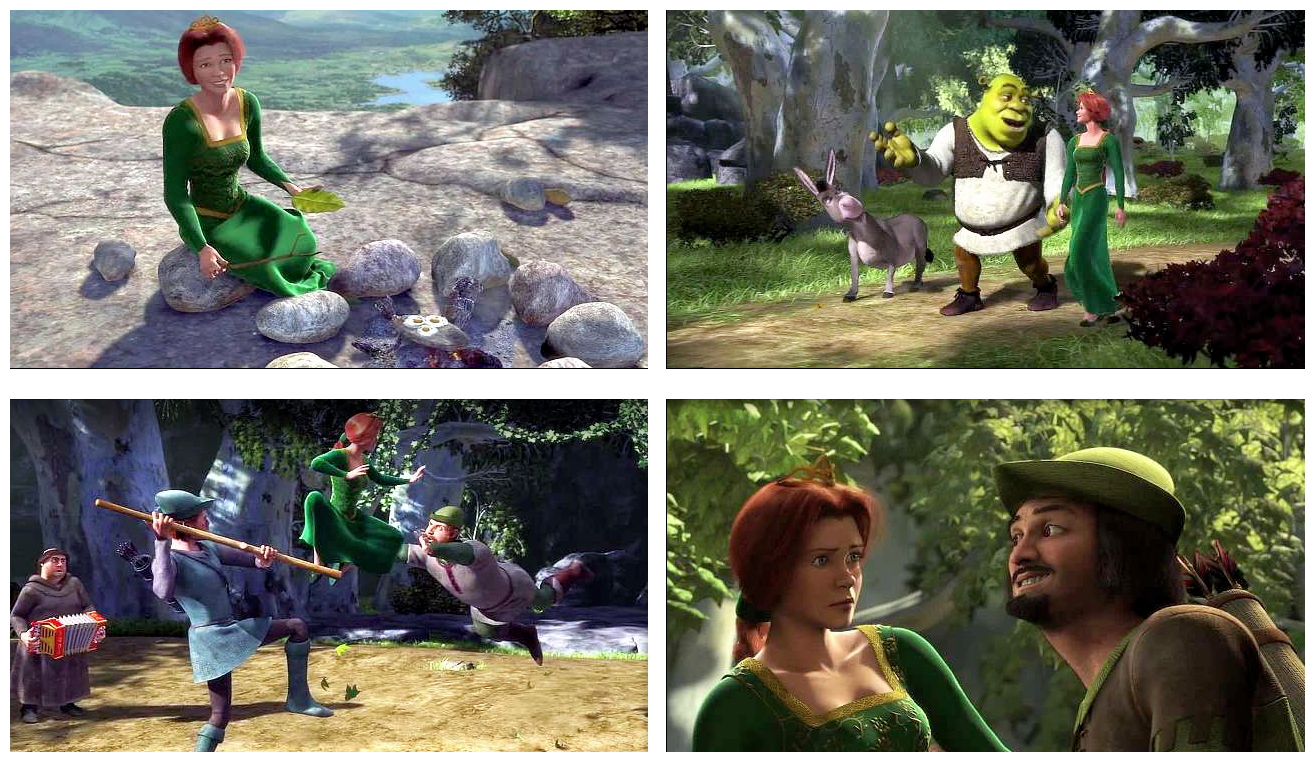 Although rather dry and business-like, the special features are not skimped upon, of which there many hours worth: filmmaker commentaries, cast interviews, behind-the-scenes, character progressions, technical goofs, games, deleted sequences and storyboards. Shrek has had three feature-length sequels so far: Shrek 2 (2004), Shrek The Third (2007) and Shrek Forever After (2010), as well as a number of short films including Shrek The Halls (2007) and Scared Shrekless (2010). In the second film Shrek meets a swashbuckling cat voiced by Antonio Banderas who proved so popular he got his own feature-length prequel entitled Puss In Boots (2011). The fifth feature film is currently in preproduction and set for release in 2019. As you can imagine, the animation and voice talent involved with each of these productions is well above standard, but I’m afraid I can’t say the same for the writing and development of the main characters. 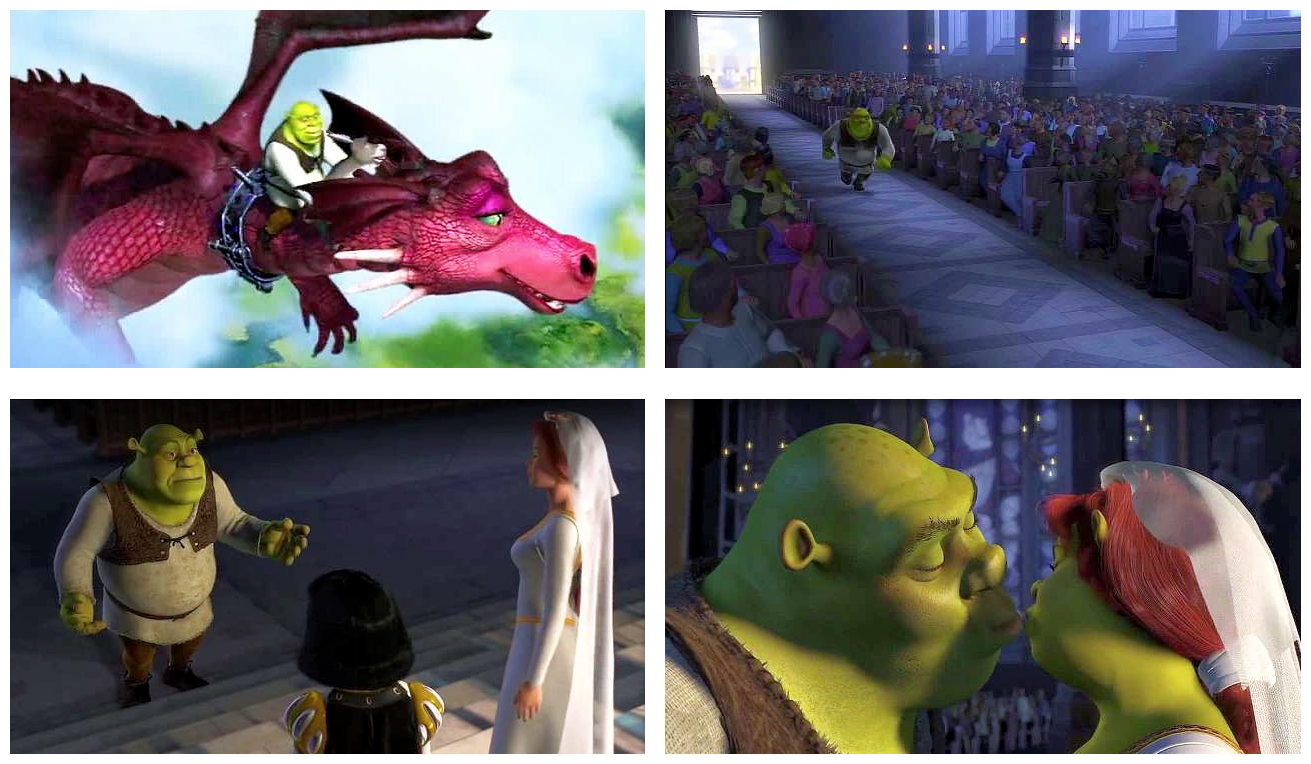 The first film is a wonderful celebration of individuality and a hero’s quest to retain his liberty, while the sequels are less so, and more about conforming to a society Shrek never wanted to be a part of in the first place: getting married; getting a job; having children; etc. It’s with this bombshell I’ll bid you farewell and ask you to join me here next week on Horror News, because my horoscope said that if you don’t read all my reviews, the Earth would be destroyed by a disaster of biblical proportions, you know, real wrath-of-God type stuff – fire and brimstone falling from the skies, rivers and seas boiling, forty years of darkness, earthquakes, volcanoes, the dead rising from the grave, human sacrifice – you get the picture. Normally I’m highly skeptical of such claims, but I read it on the interweb, it must be true. So sleep well, enjoy the next seven days and remember, the survival of the entire world depends on you visiting Horror News every week! Toodles! 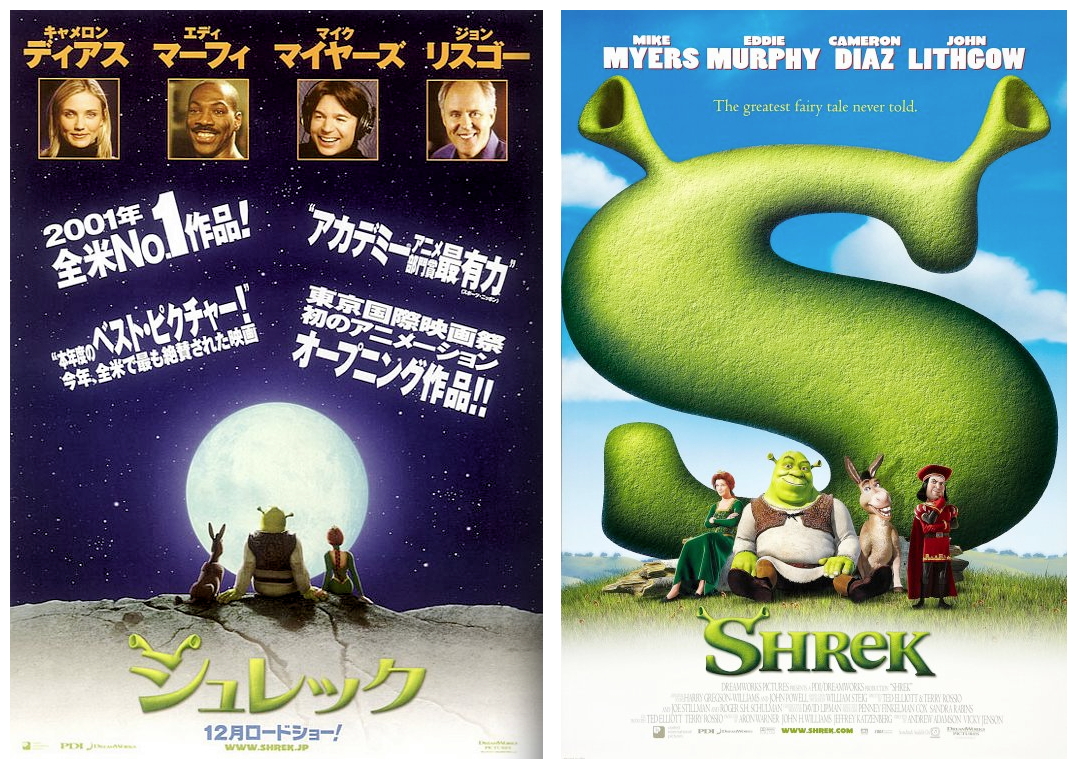