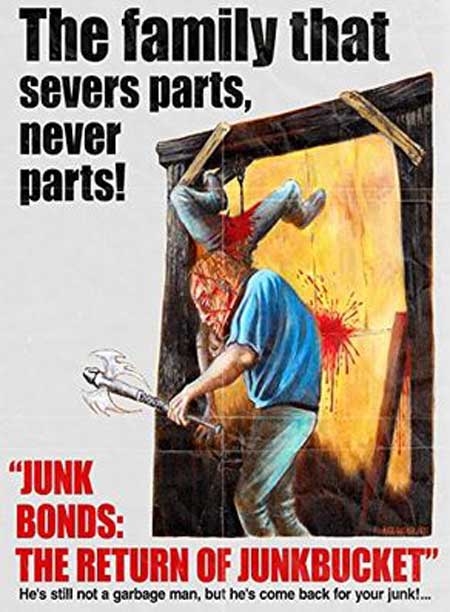 A sequel to the underground hit, Junkbucket, Junk Bonds picks up a year later as Junkbucket has found himself a family of phallic cannibals to join him in his quest to castrate most of Western Washington.

Every filmmaker has inspirations.  They watched movies that shaped them into the creative person that they are.  Many filmmakers pay tribute to the movies of their youth through homages in scenes or even entire movies.  They share what they loved about movies they have seen, and they use this love to create more entertainment.  It leads to interesting interpretations of classic scenes and movies as these filmmakers produce movies in the current film landscape. 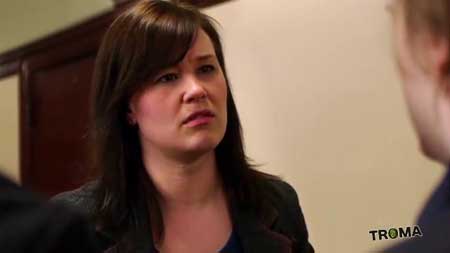 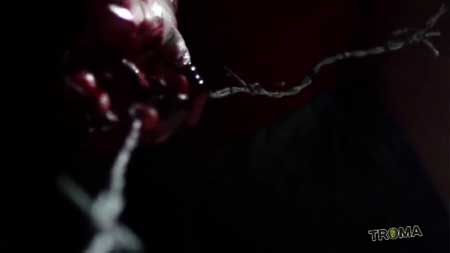 Junk Bonds: The Return of Junkbucket wears its influences like badges of gruesome honor.  One year after a run in with Junkbucket that led to the deaths of many of her friends, Cassie Daling (Erin Stewart) was once again brought into the world of genital mutilation.  Junkbucket (Ryan Miller) kidnapped her and brought her home to his family.  In a throwback to 1974 classic The Texas Chain Saw Massacre, the few remaining friends that Cassie had attempted to rescue her from this backwoods house in Washington State.  Also brought to the house were a group of strippers led by Merle St. James (Nick Edwards).

The violence in Junk Bonds: The Return of Junkbucket is primarily focused upon genital mutilation.  Junkbucket’s family would lure people into traps to take their genitalia.  In most cases, they used penises and clitorises as food.  There were multiple scenes in which people swallowed a penis, whether by itself or on a bun.  The story with Cassie was dependent upon her vaginal region.  The family was going to remove her clitoris to better bond her with Junkbucket.  Since this material was so prominent in the movie, it clearly isn’t something that most audiences will seek out. 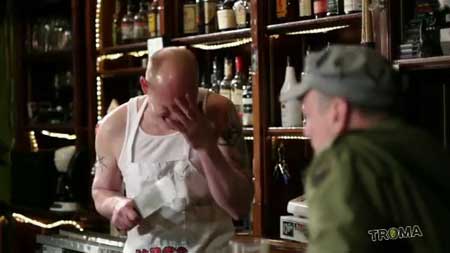 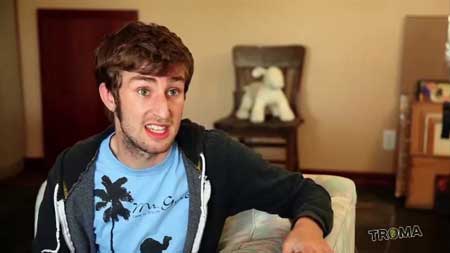 As for the story, it was a solid throwback to the travel horror movies of the past.  The Merle St. James storyline played into this aspect of Junk Bonds: The Return of Junkbucket.  It was reminiscent The Texas Chain Saw Massacre, a movie that has already been mentioned as an inspiration.  This story even included an homage to the famous hitchhiker scene as Merle and the strippers unknowingly picked up Junkbucket’s brother Moseley (Ryan Higgins) on the side of the road.  His name was not only an homage to Bill Moseley, who was in The Texas Chainsaw Massacre 2, but he proceeded to cut a body part, much like in the original scene.  He was kicked out before the group arrived at their destination.

Other references to the Texas Chainsaw Massacre movies were present throughout Junk Bonds: The Return of Junkbucket.  Small visual moments were scattered throughout, which gave it a similar feel to what it homaged.  It never felt overdone.  It felt like a loving tribute.  At no point was the movie mean.  An edge to a movie like this could take away from what the filmmakers are doing.  This was a gift, and as such, it never attacked its inspiration. 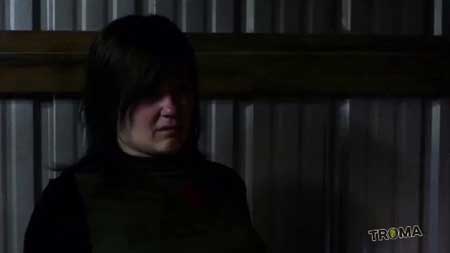 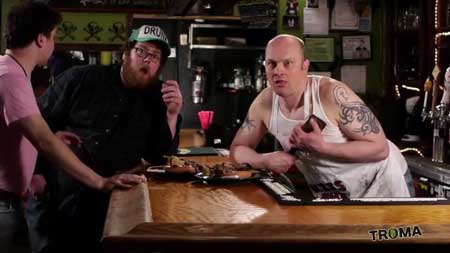 What worked best in Junk Bonds: The Return of Junkbucket was the humor.  The movie wasn’t afraid to be funny.  It was infused with dark comedy.  That started early as it followed up on the events of the original Junkbucket film.  During the reading of the will of a deceased character, there were stoner jokes.  Later in the movie, a character snapped and ran through the woods with a sledgehammer only to be stopped with one swing and other characters having no idea who he was or where he came from.  The jokes lightened what would have been a heavy, gruesome subject otherwise.  It was comic relief that kept the movie from being too serious to be enjoyable. 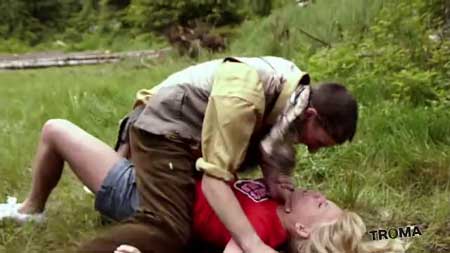 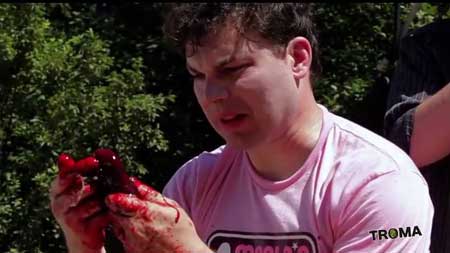 Junk Bonds: The Return of Junkbucket is a movie that would probably turn most people off because of the subject matter.  It is not a nice and pleasant movie.  But it was a loving homage to a style of horror that doesn’t get made too often anymore.  It tapped into the dirty nature of movies like The Texas Chain Saw Massacre and did it in a way that felt original yet derivative at the same time.  The derivative story didn’t take away from the movie, however, because it was a well done love letter to its inspirations.