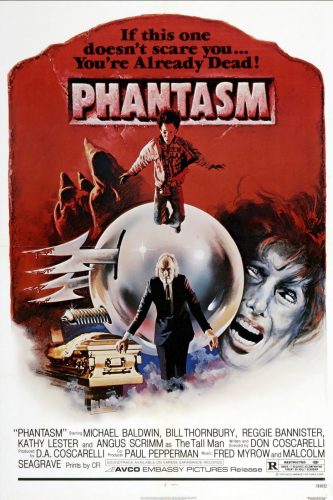 Don Coscarelli’s genre favorite, Phantasm (1979), has been restored and remastered to 4K glory by a team of phans headed up by film director Jeffrey Abrams.  It is due to be released on DVD and Blu-ray sometime in the phall, however prior to that it will be receiving a much-deserved theatrical release on September 24, 2016 at theaters participating in Art House Theater Day.

On October 7, 2016, the fifth film in the Phantasm series, Phantasm: Ravager, will be released.  The late great Angus Scrimm, who passed away in January at the age of 89, will make his final appearance as the Tall Man in this film.