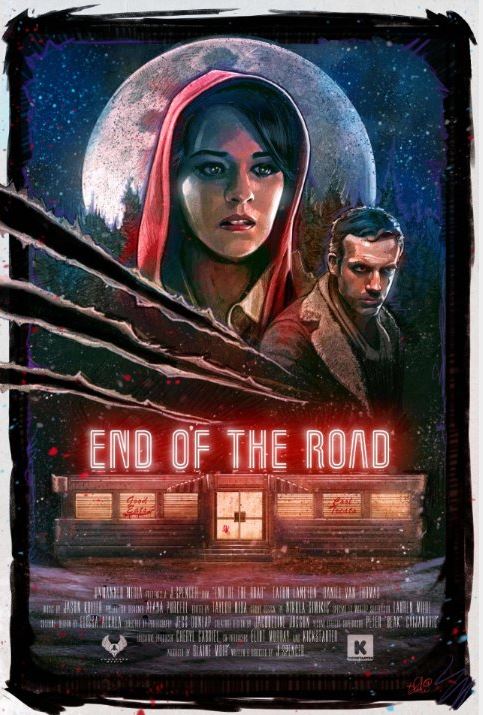 Betsy, a small-town waitress, offers a warm meal to an enigmatic drifter in a rundown diner. Little does she know she’s let a vicious and calculative werewolf loose on the diner’s colorful population.

Another short film today! This time we have END OF THE ROAD, from Unmanned Media and written/directed by J. Spencer.  Unmanned Media was founded in 2007 by Mr. Spencer and business partner/filmmaker Blaine Moir, but this is Mr. Spencer’s only listed credit as writer and director.

Right from the jump, it’s pretty easy to see where this film is going. Waitress Betsy (Tatum Langton) is walking along in a red hoodie (you get it, right?) and encounters the big bad wolf (played by Ukrainian actor Dmitrious Bistrevsky) still in sheep’s clothing. As a reward for helping her, Betsy takes the wolf to the diner where she works to buy him a meal.

It’s not giving anything away to say that what happens next is pretty brutal. I mean, the film blurb already tells you he’s a freaking werewolf. The real question here for you as the viewer is….how good is the effect gonna look?

I mean, werewolves are a well-worn genre and there’s not a lot of ground left to break. But while the film does not necessarily break any new ground, it does do an admirable job at giving us a monster worth looking at.

I loved the little red riding hood theme at the beginning.I caught it right away as soon as I saw the red hoodie. Sure, it telegraphs the story quite a bit, but then again, the film description gives it away anyhow.

Another thing that really makes this work well for me is the cast of odd characters inside the diner. Other than the restaurant manager (played by Travis Coles) and the enigmatic yet well prepared cook (played by Elester Latham), most of the characters don’t have any dialogue. But they occupy the space not as scenery but as a cast of characters. They are each unusual and stand alone while at the same time they melt into the background, creating a complete picture of the diner.

So using my special short scale of one to five, five being awesome, I’m giving this film 4 silver bullets.