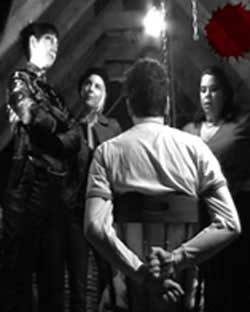 A cautionary tale about what happens to men who underestimate women in the horror genre.

I Spit of Eli Roth is meant of course to be a satire. The crew from Deviant Pictures created this one as a 15 minute short that could almost be considered a little longer kind of Saturday night Live skit. The premise here is that a group of female horror fans are offended at the recent inclusion of chick vision added to one of the extras on Eli’s DVD release. The extra blocks out all the gory kill scenes. Being dedicated horror fans they take a philosophical approach to Eli’s method of ruining the horror genre per way of over produced and typical over marketed horror movies.

As a form of payback they decide that kidnapping Eli and submitting him to his own film tortures would be the best form of punishment. That is until Dewwy appears like the Wizard of Oz fairy to suggest that they are also falling into the horror traps by subjecting him to the same token of punishments…thus also contributing to the downfall of horror.

Got that all? Well it’s short and cute and they don’t actually use the real Eli Roth in this skit. Amy Lynn Best is among the girl talent on board who helps to make a statement in a humorous way. I still love Eli’s work, so I hope these folks are only creating this as a joke.

Though whether you are one to make a stand or not, I suppose calling your film title after the director is a way to get attention. Devi Snively directs & writes this short piece which I’m assuming could be later added to a bunch of these to make a comedy/horror collection feature release. What can you say….they have fun with ideas for our viewing pleasure …check it out!