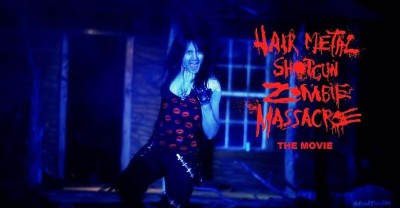 While recording their first album in an old cabin, a rock band must battle evil in order to save mankind.

What exactly is a “rock and roll horror film”? For me, it’s any horror film that uses A) rock music as a gimmick or story point in the film or B) a horror film that uses rock music as a selling point. “A” is pretty self explanatory, films like TRICK OR TREAT and ROCKTOBER BLOOD are prime examples. “B” is a little more tricky. Rock music or the soundtrack is the selling point of the picture. I include films like SHOCKER, RETURN OF THE LIVING DEAD, and STRANGELAND in this category. The genre has been lacking the last few years but within a year we have been given two, 2015’s DEATHGASM and the upcoming HAIRMETAL SHOTGUN ZOMBIE MASSACRE. DEATHGASM was a fun picture but it’s HMSZM (as amazing as the title is, I’m not going to type it out every time I mention it) that lovingly satirizes the genre and from the opening moments, it’s easy to see the filmmakers are not only music fans, but film fans as well. 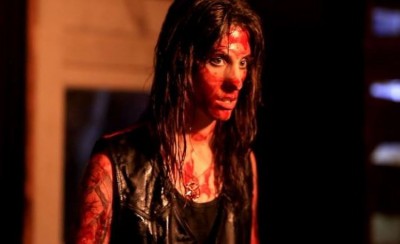 Witches’ Lips are an up and coming rock band ready to record their first record. They’ve lined up a recording studio that’s located inside a cabin somewhere in the woods. While trying to decide exactly which direction they want to go in, they’re going to have a few drinks and snort a few rails. They’re finally ready to rock when they stumble across what can only be described as a book of the dead. They want to use the book to make them one of the darkest bands on the planet. Instead, they unleash an ancient evil. An evil that possesses the bodies of the rotted corpses laid to rest in the graveyard which surrounds the cabin. With the dead clawing their way out of the ground and trying to breach the cabin, Witches’ Lips will have to band together to destroy the evil they helped to create.

From its first blistering riff till the final metal yell, HAIRMETAL SHOTGUN ZOMBIE MASSACRE delivers enough blood, guts, and hairspray to be metal as hell! There’s so much to geek out over in the film I don’t even know where to start. I’m going to go with the casting. Andrew Bourgeois, Bobby Haworth, Travers LaVille, Parrish Randall, and Garret West are the perfect rock animals. They hilariously capture the essence of what it is to be in a hair band. Now I was never in a hair band but my uncle was so I witnessed the beauty of glam first hand (anyone remember Tora, Tora? Most likely you will not but he played with them, BEFORE they were signed). The character names had me in stitches with my favorite being Thaddeous Boomhammer. Their chemistry works throughout the entire film and I think that’s a huge reason why the film is so successful. 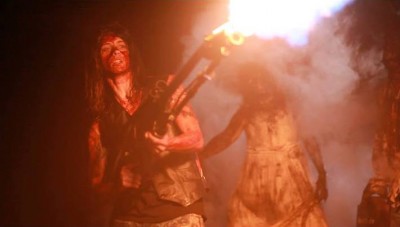 HMSZM is chock full of impressive practical effects, hilarious in jokes, pot shots at the music business, and of course some damn good metal. The film features original music written and performed by Tim “Ripper” Owens, Marzi Montazeri, and Adam Denoth. If that isn’t enough, the legendary Tom Araya from Slayer drops in to do some scene stealing. There’s plenty of carnage to go around and some great supporting characters, especially the black metal band Witches’ Lips have a rivalry with (that would make a great film as well, a “vs” type of film). 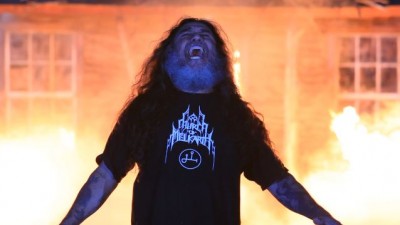 I don’t know what else I can say to peek your interest in the film. It has everything you could want in a rock and roll horror flick. Every base is touched and when the film is over, you’re still smiling and wanting more (they tease of a sequel at the end). Josh Vargas has my attention and I can’t wait to see the (possible) sequel. The best way for me to describe this is AIRHEADS meets EVIL DEAD and I think both those films are amazing and classics. Only time will tell if HMSZM ends up being classic but something deep inside is telling me it will be. Raise those devil horns brothers and sisters, this is the real deal! ***** (out of 5)