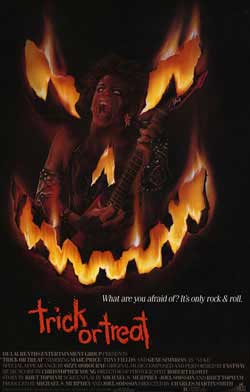 After learning that his rock ‘n’ roll idol (Tony Fields) died in a fire, teen outcast Eddie Weinbauer (Marc Price) consults a local DJ (Gene Simmons of Kiss) and learns that he can bring his hero back to life by playing his final album backward. With a resuscitated rock star by his side, Eddie’s sure he can rule his high school. But on the night of the annual Halloween dance, everything goes to hell.

Hell-o metal head horror horror hounds. As Alice Cooper once said… Horror is his second love next to heavy metal and the two go together like peanut butter and jelly. I would think Dee Snider, GWAR and several others would claim the same point of view. What do you get when you cross Brainscan, Christine and the eighties trial of seminal metal band, Judas Priest, (supposedly) secretly incorporating deadly subliminal messages into their song Better Than you Better Than Me? Take all of the above, add Metal God Ozzy Osbourne and legendary KISS Bass player/ Vocalist Gene Simmons… throw in the infamously loved holiday (especially among Horror fans) known for rising spirits and the walking dead and you have, Trick Or Treat.

The film is also a tribute to some of the best eighties bands of the era (some of which are still going strong today). Being a fan of this era, I knew this film was going to intrigue me as a kid with Ozzy and Gene on the cover. During the opening sequence, the first poster we are subjected to hanging on the lead character’s wall is Anthrax… Which are still one of my all time favorite metal outfits to this day. There are also surprisingly enough Ozzy… and Motley Crue (Shout at the Devil, of course).

Our lead headbanger, Eddie, has trouble at school making friends, especially with the jocks. He likes a popular girl that he feels would not give him the time of day. Besides, she is going out with the antagonizing no neck. Eddie looks up to a rock idol that once graced the halls of his own high school named Sammi Curr.

Sammi tragically dies in a hotel fire and Eddie’s world begins to crumble before his eyes. He has one very witty and intelligent sidekick… and his music, that’s about it. To Eddie, that’s all he needs to get by (besides the girl that he will never have). He tries to talk to Leslie in the midst of her pranking boyfriend’s antics and his prep squad behind him every step of the way. She seems to have some interest, yet seems to bash him at the same time. Eddie is distraught over the death of Sammi and confides in his local deejay amigo, “Nuke (played by Gene Simmons).” The metal spinning Disc Jockey gives him Sammi Curr’s last album (“the only print in the world”) that is to be played at midnight on Halloween over the air via copied cassette. Eddie takes it home and this is where all Hell breaks loose… ROCK N’ ROLL!

Sammi speaks to Eddie by spinning the record in reverse. He guides Eddie down the path of revenge as Sammi does all of the sinister work himself, all while watching over Eddie’s biddings. He wanted to get the bullies back, but Sammi demanded it and the group of jocks eventually think he has gone from plain weird to all out evil.

The reason I have compared this to John Carpenter’s Christine and Brainscan is because after meeting his favorite dead idol, he becomes obsessed. He begins to act strange around his mother and his best friend begins to worry. He gradually almost becomes one with Curr, his living dead guitar and vocal god with a rebellious attitude and a lot of anger. Just as Arnie was with his 1957 car, the (adored girl,) record and revenge begin to corrupt his mind. Eventually, (such as Trixter, in Brainscan) Sammi shows himself and begins to suck Eddie’s soul, one note and backwards command at a time.

The visual effects are a combination of computer generated and a slight touch of practical and animitronic monsters. Special Effects master Kevin Yagher played a small roll as the guitar player from Sammi’s metal outfit between helming the demonic puppet. The gore score is not too high, but amusing all the same. There is a hot scene spiritual stripping and walkman induced orgasm, until it gets dangerously out of hand.

I was also a metal head in high school, but I had a good share of close friends. I’ve honestly never seen a kid get such a bad reputation just for being somewhat different, unless he brutally brutally begged for punishment. Other topics of the industry, such as censorship and the banning of metal or performances are present. You can tell the film makers did their homework during the mid eighties’ time of media scrutiny. One aspect I thought was absolutely awesome was the part that Ozzy Osbourne played. He ironically portrayed an angry holy roller that would stop at nothing to see these wretched heavy metal albums destroyed and kept away from youthful ears. I thought this was very humorous on Ozzy’s part, since his own music has been accused and attacked for (years for) being the “solution for suicide (as in Suicide Solution)” for many angst ridden teens. Ozzy took a stab at the other side of the spectrum and almost poked fun at himself, which takes balls that only Ozzy has. It was rumored that Gene Simmons was originally asked to play the role of Sammi, but passed because a shock Deejay had always been his dream role if he were to ever act.

Overall, this is a fun film for the metal head out there. It can get slightly cheesy at times, but hey, it’s the eighties and the subject matter (eh-hem, to all of you that believe in the nonsensical embedding of backwards Satanic messages) is quite funny in itself. Pink Floyd and Venom have actual reversed messages in their music, but none of which tell the listener to harm another human being.

For those of you itching with curiosity, Venom’s record, Welcome to Hell says, “I will return” when played backwards (during the end of side two). Pink Floyd’s The Wall states, “congratulations, you have found the hidden message.” No harm in these cases. Please keep in mind skeptics, this is why Judas Priest won the case in the eighties. This redundant tactic does not hold water.

The (somewhat) metal blasting flick, on the other hand, is a fun little ride through the skull of a teenage head banger and the spirit of his fallen idol. If you’re looking for major shock or gore, it isn’t present in this film. Although a fun and monstrously demonic (and sexy, as far as Leslie is concerned) time is to be had by all. The music provided for Eddie’s band is by a no-name eighties group that resembles the likings of popular genre band Cinderella (Night Songs album/ era) and and assortment of other eighties influences. All in all, I’d say give it a try for amusement’s sake. Even for the non-metal head, it’s a fun film. I love what it stands for and the “message” it tries to get across. I give this film, Trick Or Treat, TWO (METALLIC THRASHING MAD) HORNS UP.