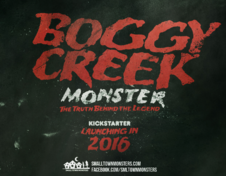 On January 31st, the Small Town Monsters’ indie film crew will launch a crowdfunding campaign to fund their third film examining rural, mythological monsters; Boggy Creek Monster. The film will focus on the 1971 horror classic, Legend of Boggy Creek, and the true stories that inspired it, and will be filmed in Fouke, Arkansas in partnership with author and television personality, Lyle Blackburn. The “Fouke Monster” became the subject of nationwide interest after a rash of sightings of a hair-covered beast rocked the tiny town of Fouke in the late 60’s and early 70’s.

The teaser pays homage to Legend of Boggy Creek, directed by  Charles B. Pierce (the Town That Dreaded Sundown) with sound bites from the original film, while utilizing new footage shot on location in Fouke in 2015. Boggy Creek Monster will delve into the bizarre, and storied history of creepy creatures said to reside in the swamps in lower Arkansas.

A Kickstarter campaign is a form of crowdfunding in which people are welcomed to purchase various “rewards” with the monetary amount given going toward the production of the film. In this case the rewards include apparel, a one-of-a-kind poster (designed by artist Sam Shearon) featuring the Boggy Creek Monster himself, film memorabilia, and, uniquely, a chance to see the second film in the Small Town Monsters’ series, Beast of Whitehall, a full month before its official release on April 1st. 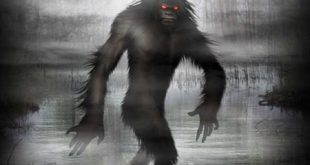